Where Do We Stand on the Exclamation Point? 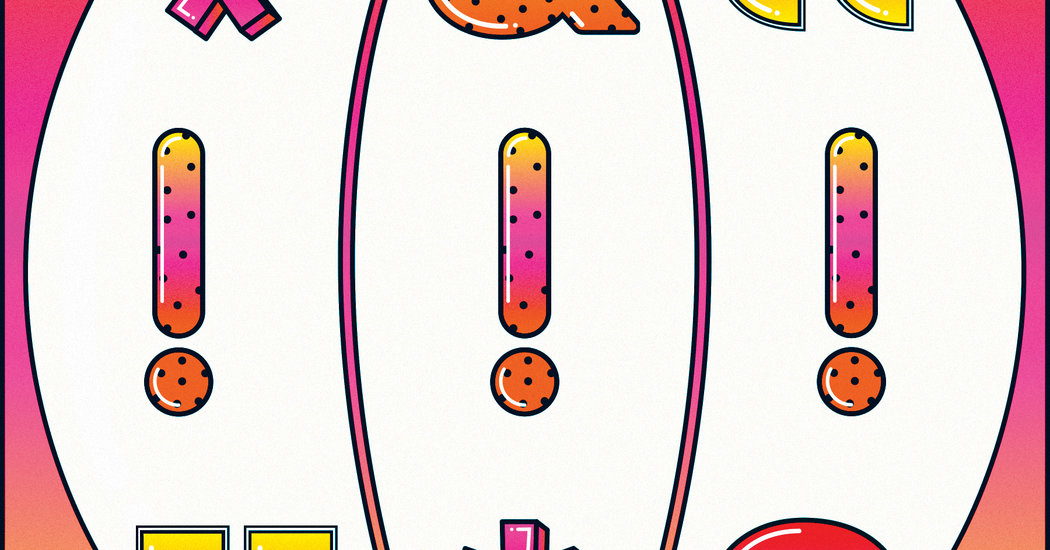 Meredith Golden says that finding your soulmate on Tinder is easy, as long as you swear off one vice. It isn’t cigarettes or cheese fries. It’s slimmer, sneakier. That cardinal sin: the exclamation point.

“Punctuation should not be excessive, especially in an opening message,” said Ms. Golden, who ghostwrites for those struggling on the dating apps. She has seen too many hopes dashed by an overly enthusiastic greeting.

Conveniently, her rules also apply to the workplace. The sly devil is just as loathsome in the office, where it has been said to ring unprofessional. So much so that Tami Reiss, a product strategist, created a Gmail plug-in called Just Not Sorry, that alerts users when they’ve exceeded the appropriate number of marks (two) in a work email.

“This isn’t Vegas on a girls trip,” said Ms. Reiss. “The triple exclamation point is great when your best friend just got engaged, but at work, it can come off as juvenile.”

The exclamation point is more than five centuries old, but it can easily be mistaken for the runt of the punctuation family. It wants your forgiveness and attention. It wants undying love, while you’re at it. The mark is to grammar what a Red Sox fan is to baseball, insisting it’s the underdog yet coming out on top, spilling its beer on your lap in exaltation.

To Jonny Sun, a writer on “BoJack Horseman” and a viral tweeter, the exclamation point is the wild child. “It’s a rebellion against the weighty rules of grammar that were passed down to us,” he said. “The exclamation point is a way of saying we’re bucking these rules because they feel old fashioned and dusty.” The period, in contrast, “feels like a sigh.”

Authors and editors typically denigrate the insurgent mark as undignified. Veneeta Dayal, a professor of linguistics at Yale, said formal communication has historically separated the informational from the emotional — and the exclamation point lines up with the latter. The author Elmore Leonard advised writers to measure out “two or three per 100,000 words of prose.” F. Scott Fitzgerald said exclamation points amount to “laughing at your own jokes.” The mark was most at home on the children’s shelf, in titles like “Oh, the Places You’ll Go!” and “Good Grief, Charlie Brown!”

Eager to please and good with kids, the exclamation point skews feminine. The writer Amelia Tait calls it “emotional labor” in grammatical form, shouldering the responsibility to ease tension or hurt. Gretchen McCulloch, a creator of the podcast “Lingthusiasm,” said it functions as a “social smile” and a mark of sincerity in a time when irony abounds. It just wants to Marie Kondo your sentences — to clear out a small space and spark some joy. (Its origin is the Latin symbol for joy, io.)

To some grammarians, attempts to condemn the mark smack of a dog whistle for sexism. “Use too many exclamation points and you won’t be taken seriously, use too few and you can come off as cold,” said Deborah Tannen, a Georgetown linguistics professor who helped coin the phrase “double bind.” “It’s the story of women’s lives in a nutshell.”

Lucky for the perky punctuation, women have a way of starting trends. Dr. Tannen cited research showing young women are often at the forefront of shifts in linguistic behavior, from vocal fry to uptalk. She said that as the informality of digital speak spills over into professional communications, a single exclamation point is becoming just as common as the period. Some are sounding the alarm on “exclamation-point inflation.”

The meaning of the mark has also begun to change in context. Lana Del Rey’s end-of-the-world album “Norman ______ Rockwell!” hardly bears the optimism of a Dr. Seuss title, despite its punctuation. Taylor Swift’s “ME!,” on the other hand, more closely approximates the tone of a children’s book. President Trump has issued more tweets with exclamation points than executive orders since entering office. Usually they express an enthusiasm that borders on rage.

Regardless of the intent behind its usage, many exclamation point skeptics remain. Beth Dunn, a product editor at HubSpot, made a flow chart indicating it’s only appropriate for an emergency: “Hey! I’m on fire.”

Lydia Horne, the editorial business manager at Wired magazine, stopped using the mark in February. Afterward, her first few correspondences were awkward — a tepid Slack to her boss, a cold text turning down a date — but she found the restraint worthwhile.

“A cleanse is good for the writing metabolism,” Ms. Horne said. She added that the point can serve as a crutch; tossing it helped her to find more precise language to express her emotions.

Clare Palo, a social media editor at New York Magazine, declared last week that the anti-exclamation point movement “has gone too far.” Her whole life she has been told by friends, the internet and, most recently, her landlord, to tone down her punctuation. What’s so wrong, she asked, with wanting to spread some digital cheer? Her colleague Madeleine Aggeler noted that at this point in the digital evolution of language, ending a sentence in a period (“okay.”) can be misread as: “Why don’t you crawl into a cave and die?”

Ms. Palo thinks Gen Z may turn the tide all the way. “Gen Z-ers use exclamation points more casually because they grew up texting,” she said. (Older generations may be less comfortable with the mark because it didn’t appear on a typewriter; rendering one required three different keys.)

When Ms. Aggeler wrote a plea for more exclamation point use, she received responses calling her a “coddled millennial.” She finds the punctuation policing baffling. “You don’t go to the office to be rude,” she said. “If you can easily make people more comfortable with an exclamation point, why wouldn’t you do it?”

Other writers, professional and otherwise, agree that the mark is symbolic but, Loryn Brantz, the author of “Feminist Baby,” sees its deployment as a act of protest.

“To use exclamation points is a very small and subtle way to defy the patriarchy of the workplace(!),” she wrote in an email.

What Are the Best Houseplants to Get You Through Winter?
22.09.2021
Latest
Go to Top