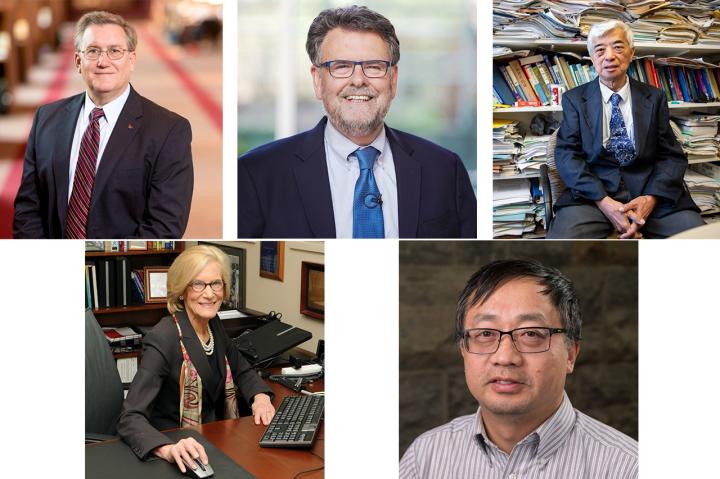 Five scientists from Virginia Tech were named as Fellows of the American Association for the Advancement of Science (AAAS), a high honor of the world’s largest scientific society, according to an announcement this week.

Elected by their peers and representing a broad range of AAAS “sections,” including statistics, neuroscience, engineering, psychology, and geology/geography, the Virginia Tech professors are among 443 newly elected scholars.

The five new Fellows are believed to be the most from Virginia Tech in a single year and are the most additional Fellows from any Virginia university in 2019.

“This group of new AAAS Fellows reflects the breadth and depth of multidisciplinary excellence among the faculty at Virginia Tech,” said Cyril Clarke, executive vice president and provost of Virginia Tech. “These distinguished faculty deserve the recognition they will receive through this honor. We are proud to be associated with these extraordinary colleagues who are making new discoveries, creating significant innovations and impacts in their fields, and leading students to academic and professional success.”

The new Fellows will be formally announced in the AAAS News & Notes section of the journal Science on Nov. 29.

The tradition of AAAS Fellows began in 1874. New fellows will each receive an official certificate and a gold-and-blue rosette pin on Feb. 15 at the organization’s annual meeting in Seattle, Washington.

Prior to coming to Virginia Tech as head of the Department of Statistics in 2015, Fricker was a professor in the Operations Research Department at the Naval Postgraduate School in California. Fricker also has served as associate director of the National Security Research Division and a senior statistician at the RAND Corp., where he oversaw a $40 million research portfolio conducted by the National Defense Research Institute, a federally funded research and development center.

He has more than 20 years of statistics experience, including work in both corporate and academic settings, and conducting research on Gulf War illnesses, military recruiting and retention, disease detection and surveillance, and body armor testing.

Fricker is widely recognized for his research in quality control and statistical process control; statistical methods for bio-surveillance, survey design, and analysis; and data analytics and data science.

He is a Fellow of the American Statistical Association (ASA), a former chair of the ASA Section of Statistics in Defense and National Security, and an elected member of the International Statistical Institute.

Earlier this year, Fricker took on a new role as associate dean for faculty affairs and administration for the College of Science. His duties include assisting Dean Sally C. Morton in the recruitment, retention, and development of faculty.

Fricker earned his bachelor’s degree with merit in mathematics from the United States Naval Academy in 1982, his master’s degree in operations research from George Washington University in 1991, and a master’s degree and a doctorate in statistics from Yale University, in, respectively, 1994 and 1997.

Michael Friedlander joined the Fralin Biomedical Research Institute at VTC in 2010 as inaugural executive director. Today, he leads 30 translational research teams with more than $125 million in extramural funding working to solve major health challenges and to bring biomedical innovations to the clinic and marketplace.

Friedlander is neuroscientist who studies synaptic plasticity — how connections between brain cells strengthen or weaken during development or in response to experience and injury. He is currently leading research to determine how temporal patterns of neural activity modulate synaptic strength under normal physiological conditions and after mild traumatic brain injury.

Friedlander became known early in his career while conducting research as a graduate student. He studied how behavior, molecules and electrical signals in the brains of goldfish adapted to temperature changes – work his lab has followed up recently with studies in icefishes in Antarctica. The resulting paper in the Journal of Comparative Physiology was hailed as a landmark analysis of how an organism adapts behaviorally, physiologically, and biochemically to temperature change and continues to be cited four decades later by biologists studying climate change.

As a postdoctoral fellow and early career faculty member, Friedlander established some of the first direct structure-function relationships between individual neurons in the brain’s visual processing regions resulting in a series of papers in Science, Nature, and the Journal of Neurophysiology.

His lab’s work on nitric oxide published in Science and the Journal of Neuroscience provided some of the earliest evidence on how this molecule modulates release of neurotransmitters and enhances signal detection in the brain’s visual cortex.

In addition to serving as Virginia Tech’s vice president for health sciences and technology and executive director of the Fralin Biomedical Research Institute, Friedlander is a professor of biological sciences in the College of Science and the senior dean for research at the Virginia Tech Carilion School of Medicine. Before joining Virginia Tech, he served as the Wilhelmina Robertson Professor of Neuroscience and chair of the Department of Neuroscience at Baylor College of Medicine.

Prior to that, Friedlander was a professor and founding chair of the Department of Neurobiology, founding director of the Neurobiology Research Center, and director of the Civitan International Research Center for Intellectual Disabilities at the UAB School of Medicine. He received his doctoral degree from the University of Illinois and his bachelor’s degree from Florida State University.

Since joining the College of Engineering’s Department of Chemical Engineering faculty in 1982, Liu has achieved international recognition for his promotion of sustainable development and environmental stewardship. He and his graduate students have made significant contributions in the areas of energy and water savings and design and optimization of polymer, biodiesel, and petroleum refining operations.

For close to 40 years, Liu has worked in industrial outreach during university breaks, promoting sustainable development in Virginia industries and developing countries.

While serving as a senior advisor to the president of China Petroleum and Chemical Corp., the largest energy and chemical company in Asia and a global top three chemical company, Liu led the development of water-saving engineering and investment proposals throughout the company’s 45 refining and chemical subsidiaries. This effort resulted in a $256 million investment, a 60 percent decrease in freshwater usage, and a 65 percent decrease in wastewater discharge.

With Formosa Plastics Group in Taiwan, one of the world’s top chemical producers, Liu led engineers to achieve similar water savings. In addition, the renowned scientist has worked closely with American-based corporations, such as Honeywell Specialty Materials.

Liu and eight of his Virginia Tech doctoral students have co-authorized seven pioneering textbooks on the methodologies for industrial water reuse and wastewater minimization; for the simulation, optimization, and sustainable design of polymer plants, petroleum refineries, and adsorptive and chromatographic separation processes; and for the artificial intelligence and neural networks in bioprocessing and chemical engineering. All of their textbooks have received excellent reviews by academic experts and industrial practitioners.

Sharon Landesman Ramey has devoted her career to studying the multiple biosocial and environmental influences on prenatal and early child development, the transition to school and academic achievement, family dynamics, and intergenerational vitality and competence.

Currently, she is a leader of the nation’s first multicenter pediatric stroke recovery trial, headquartered at Virginia Tech and uniting researchers and clinicians from 12 sites across the United States to evaluate a therapy to help 8-month-old to 24-month-old infants who have suffered strokes.?

In addition to multi-site trials, Ramey leads studies of the impact of the social ecology on quality of life for individuals with intellectual disabilities, longitudinal studies that address health and educational disparities, and innovative early childhood and parenting programs to improve the educational and health outcomes of children.

With her husband, Craig Ramey, a research professor and distinguished research scholar, she has written award-winning parenting books that became the companion volumes to two PBS television series, “Right from Birth” and “Going to School.” She has authored more than 250 scientific publications and seven books.

Her current research focuses on the new field called implementation science that seeks to discover the most effective ways to rapidly translate scientific breakthroughs into practical use for children and families.

Previously, she was director of the Frank Porter Graham Child Development Institute at the University of North Carolina at Chapel Hill and was the founding director (along with Craig Ramey) of the Civitan International Research Center at the University of Alabama at Birmingham and the Georgetown University Center on Health and Education.

A professor of geobiology in the Department of Geosciences and a member of the Global Change Center at Virginia Tech, Xiao has focused his career on researching life in the Precambrian eon, studying life and environments in early Earth history using paleobiological, geological, and geochemical data.

His research has taken him to Australia, China, India, Siberia, and other parts of the world, where he studies ancient rocks to illuminate the history of the biosphere.

Among his standout discoveries: Finding what could be among the first trails made by animals on the surface of the Earth dating back 550 million years.

Xiao called the unearthed fossils, including the bodies and trails left by an ancient animal species, the most convincing sign of ancient animal mobility. Named Yilingia spiciformis – that translates to spiky Yiling bug, Yiling being the Chinese city near the discovery site – the animal was found in multiple layers of rock. The findings were reported in Nature in September 2019.

He also has helped solve paleoclimatic and geochemical mysteries, such as the impact of massive ice ages on the biosphere and Earth system more than 600 million years ago, the rise of an oxygenated atmosphere and its relationship with animal evolution, and the carbon dioxide levels in the atmosphere going as far back as 1.5 billion years ago.

His research, totaling more than $4 million, has been funded by the National Science Foundation, NASA, the American Chemical Society, and National Geographic Society. He was a recipient of the 2006 Charles Schuchert Award by the Paleontological Society and the 2010 Guggenheim Fellowship from the John Simon Guggenheim Memorial Foundation. He is a Fellow of The Geological Society of America and The Paleontological Society. In 2017, he was named as an Outstanding Scientist by the Science Museum of Virginia. Earlier this year, he was awarded the Patricia Caldwell Faculty Fellowship by the College of Science, an award established by its namesake and Virginia Tech alumna, Patricia Caldwell.