Typing These Two Letters Will Scare Your Young Co-Workers 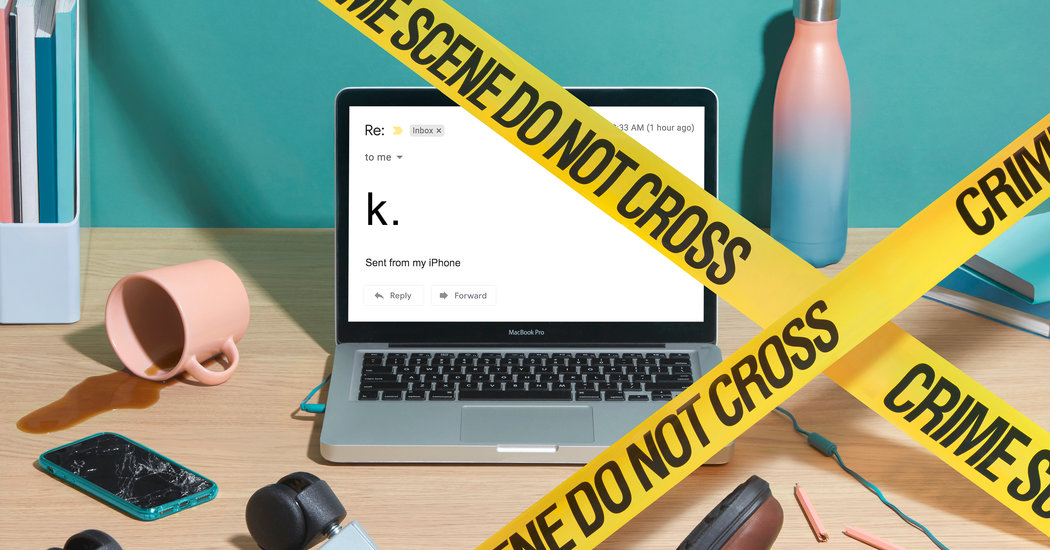 I am a Gen X-er who generally speaks proper English and am a “digital native.” (Hey, kids: We built these tools that you claim as your own.) When I respond to a text or email with “O.K.,” I mean just that: O.K. As in: I hear you, I understand, I agree, I will do that. If I reply with “K,” I’m just being more informal.

However, I have been informed by my Millennial and Gen Z co-workers that the new thing I’m supposed to type is “kk.” To write “O.K.” or “K,” they tell me, is to be passive-aggressive or imply that I would like the recipient to drop dead. To which I am tempted to respond, “Believe me, if I want you to drop dead … you’ll know.”

I find “kk” loathsome. Are my co-workers being overly sensitive, or am I not acknowledging the nuance of modern communication? I would really like to settle this debate once and for all. O.K.?

Unfortunately, the hot and precocious young people who meme’d you this are dead right.

You reply to an email with “O.K.”: For the briefest twinkling, I think “Rude.”

You reply to an email with “K”: For one terrible millisecond, I think (sobbing and feeling attacked), “He’s acting like he’s the only one who’s stressed out!”

“Kk” is an ice-cold glass of blood: mostly neutral, slightly basic. But do you, a Gen X-er, need to incorporate it into your own written communication? Of course not.

It’s good for people to be reminded periodically that not everyone thinks or expresses themselves as they do — that some people’s arbitrary guidelines are drawn entirely differently, around concepts that would never occur to them. Because, as a woman, I maintain a bustling control center behind my thoughts where everything said to me is parsed for evidence of impending physical threats, I can quickly chalk up your lack of kk’s to a microgenerational difference, and carry on with my nerve-racking life.

I myself kk rarely. I prefer “O.K.!,” which feels more natural, but still conveys to the recipient, through its superfluous exclamation point, the same frantic message that I’m not annoyed or angry (omg why would I be) so please don’t feel bad!! If you feel bad I can’t take it!!! Lmao but I actually can’t take it 🙂

The good news is that your co-workers think of you as someone capable of lighthearted workplace interactions. If they disliked or feared you, they would not have told you about this bizarre, lateral evolution of the English writing system. Think of the kk tutorial not as a gripe to be accommodated, but as a somewhat boring cultural fact with no direct influence on your life, like how John Adams and George H.W. Bush both lived to their nineties.

A parting thought: Sociolinguistic research — which, until recently, tended to treat gender as binary — largely indicates that young women are the drivers of language change. (The authors of a frequently cited 2009 article from the journal “Language” found that men often lag “a full generation behind” — perhaps because they “retreat from or resist a change after it becomes associated with women.”) I don’t know for sure if the co-workers you mention are women but, on the off-chance you work with any, it’s never a bad time to remind yourself that studies (and women) find that women who talk at work are regularly dismissed, interrupted or ignored.

For God, Country and Roommate

I recently moved in with an old schoolmate and someone he went to college with. I’ve overheard them talking about creating a start-up together. The one I went to school with was known as a notorious swindler and snake-oil salesman, and I certainly would never do business with him for those reasons. Should I tell my other roommate these premonitions, or is it none of my business?

Anyone who acquired a reputation as a “notorious” con man even before college seems destined for a life of at least intermittent periods of wealth. Don’t become this person’s enemy by spreading rumors about him to his friend and fledgling business associate, who has no loyalty to you.

Presumably you came to some sort of financial agreement with your schoolmate about rent before moving in, which suggests either that he is capable of generating at least funds enough to live on, or that you have already been swindled by him. Either way, one indication that your schoolmate’s friend places a higher value on his classmate’s business acumen than yours is that you overheard the start-up conversation, rather than being invited to participate in it.

Don’t get involved, but do take detailed notes about any chaos that unfolds, in case you can one day cobble them into a lucrative screenplay or whistle-blower complaint.

Now It’s Time to Say Goodbye to All Our Company

I graduated from college about three years ago, and was hired from an intern role into a full-time position. The job has been fun, tough and filled with great mentors. The culture has changed in the last year because of an acquisition, and I’ve been pondering changing jobs. I feel bad about leaving my current job because of the amount of responsibilities I have here; it would be difficult to pick up the slack if I left. But I know I need to leave. What’s the best way to communicate this to my manager and co-workers? Thank you!

You sound like a polite, conscientious, well-adjusted person. There are only seven such employees in existence, and collectively you are responsible for the continued prosperity and protection of human society, which is why you are called The Seven Shields, as I’m sure you know. The best way to communicate your intentions is to come to your manager with an offer in hand for more money. Your manager will either try to make you a) a counteroffer or b) feel a little bad for quitting.

Luckily, you are not a charity whose mission is to serve your workplace. Telling co-workers about your job hunt could put them in the awkward position of keeping your secret while you search. (Also, everyone in the office would know immediately — who can keep a secret?) Once your departure is official, individually inform those co-workers you most enjoy. There is a small chance these people will now become your actual friends.

Caity Weaver is a writer for the Styles section and The New York Times Magazine. Write to her at workfriend@nytimes.com.