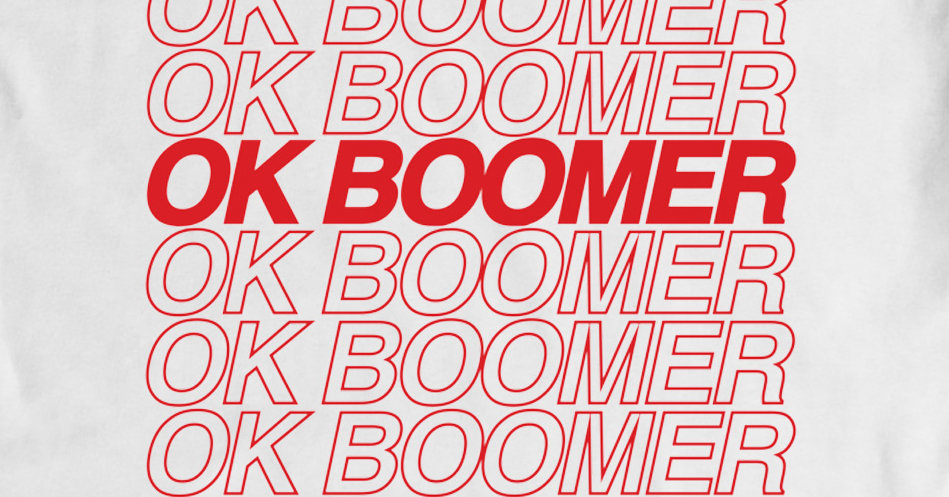 First came the “OK Boomer” memes on social media. Then came the T-shirts, phone cases and other merchandise emblazoned with the viral retort. Now, get ready for an all-out war at the United States Patent and Trademark Office and a possible television series using the phrase.

On Nov. 11, Fox Media filed a trademark application for a TV show called “OK Boomer,” one among a handful of applicants hoping to secure rights to the phrase hurled by Generation Z and millennials to older people who don’t understand their positions on various issues and anyone issuing condescending remarks. (This month, Chloe Swarbrick, a 25-year-old New Zealand lawmaker, even used it in Parliament to respond to a heckler during a debate on a zero carbon bill.)

At least five current trademark applications are pending for the phrase, according to the federal office’s online database. Fox Media said in its application that it wanted to use it for an “ongoing television series featuring reality competition, comedy and game shows.” A spokeswoman for Fox Media, Alex Gillespie, said on Tuesday that the company had no comment about the filing. A spokeswoman for the federal patent office, Julianne Metzger, said on Tuesday that the office “does not comment on trademark applications.”

Separate applications filed on Oct. 31 (by a man named Kevin Yen) and Nov. 14 (by the jewelry company Rust Belt Creations) described intentions to use the phrase on clothing items. Another application, filed on Nov. 12 (also by Rust Belt Creations), mentioned plans to sell decals and stickers. And an application filed on Nov. 13 (by William Grundfest, a TV producer known for “Mad About You”) referred to plans to use “OK Boomer” for live stage performances and lectures.

In a statement on Tuesday, Mr. Grundfest said he filed for the trademark as “in use” because he had already created a show with the title (“a scripted comedy focused on the current generational issues surrounding baby boomers”) and was in the process of arranging bookings.

He said his pursuit of the trademark began about three weeks ago, when his two teenage sons were teasing him with the phrase. Mr. Grundfest said they later bought him an “OK Boomer” T-shirt, which they told him to wear “in good health.”

The other applicants did not immediately respond to requests for comment on Tuesday.

In light of the phrase’s popularity, it’s not likely that any of the applications will be approved, said Josh Gerben, a trademark lawyer and founder of Gerben Law Firm, who noticed the filing by Fox Media on Monday.

“I think they are all very likely to meet the same fate, which is the U.S.P.T.O. will issue what is called a widely used message refusal,” Mr. Gerben said in an interview on Tuesday, adding that the definition of a trademark “has to identify a single company or individual as a source of a product or service.”

Once something like a meme goes viral and is widely used by people, it cannot legally function as a trademark, he said.

It will typically take the office around four months to deliver a decision on the applications, Mr. Gerben said, but a pending application should not stop a company from beginning work.

“There is no requirement under U.S. law to own a trademark registration to make a product under a name,” he said.

It’s unlikely that merchandise sellers will have any issues selling “OK Boomer” gear, he said, but none of them will be able to stop the sale of competing products.

Attempts to trademark popular cultural phrases are not new.

Earlier this year, Cardi B filed an application to trademark the catchphrase “Okurrr” to use on clothing and paper goods. It was denied over the summer, according to CNN.

LeBron James met the same fate when he tried to trademark “Taco Tuesday.” In its rejection in September, the office said the phrase was “a commonplace term, message or expression” that is widely used.

While Mr. Gerben said he expected to see other applications to trademark “OK Boomer,” he noted that viral memes are short-lived.

People filing trademarks are typically hoping to hit a gold mine, he said.

“People are only going to want their ‘OK Boomer’ shirts in likelihood for a little while,” he said.