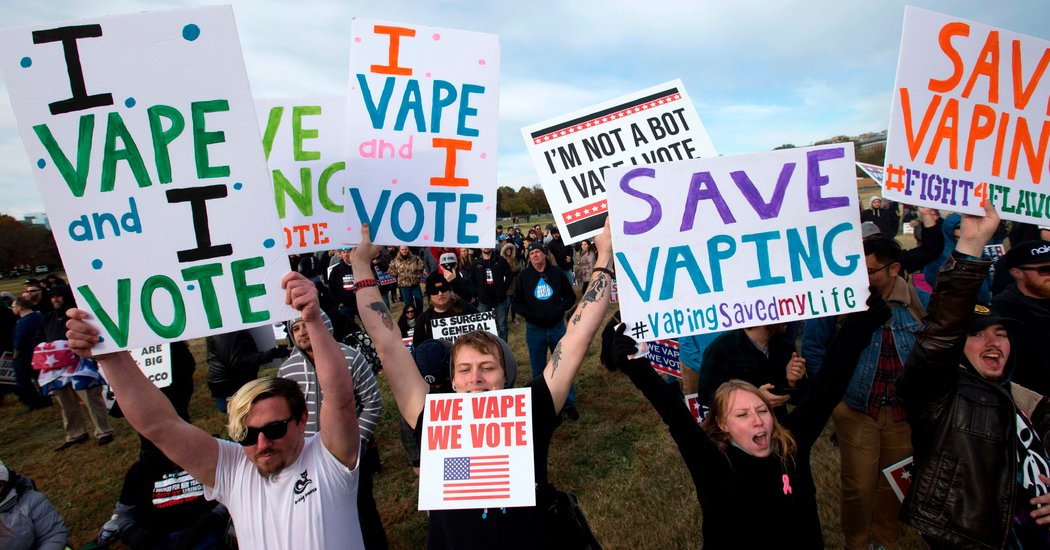 President Trump’s nominee for Food and Drug Administration commissioner, Dr. Stephen M. Hahn, declined to answer questions from senators in both parties about whether he would push for a ban on flavored vaping products at a confirmation hearing Wednesday.

The questions placed Dr. Hahn, a cancer executive without any Washington or governing experience, at the center of a political battle over the surge in teen vaping and the emergence of mysterious vaping-related illnesses that have killed at least 44 people and sickened more than 2,000. Most of the lung injuries reported in recent months have been attributed to THC-related products.

The Trump administration has recently retreated from a promise in September that it would ban most flavored e-cigarette products, citing concerns about the effects on businesses and repercussions from voters.

Dr. Hahn, who is the chief medical executive of the University of Texas M.D. Anderson Cancer Center, said he had not discussed the issue with Mr. Trump. He added that the decision on flavor restrictions would not come under his purview because it was already under final review by the White House. But he also noted his training as a lung cancer doctor, and said at the hearing, “I think this is an important, urgent crisis in this country,” adding that he did not want to see another generation of teenagers become addicted to tobacco and nicotine. “I believe that we need to take aggressive action to stop that.”

Several states and municipalities have tried to outlaw flavored e-cigarettes and are now facing court challenges from the vaping industry. On Tuesday, the American Medical Association called for a far-reaching ban on all vaping products, as two more states sued Juul, the nation’s largest seller of e-cigarettes, over its marketing practices.

The questions about e-cigarettes, by members of the Senate’s Committee on Health, Education Labor and Pensions, highlighted how carefully Dr. Hahn would need to navigate a range of sensitive issues if he were confirmed to lead the F. D.A., a sprawling agency with oversight of everything from tobacco and e-cigarettes to food safety and the approval of drugs and medical devices.

At the hearing, Senator Mitt Romney, Republican of Utah, described the questions about e-cigarettes as a “canary in the coal mine” that would demonstrate how Dr. Hahn would respond to political pressure and corporate influence. “How you will deal with this issue is a pretty good test case for how you will deal with these issues on an ongoing basis,” he said.

Dr. Hahn sought to portray himself as a committed cancer researcher and medical doctor who would bring the values of those professions to his tenure as F.D.A. commissioner. “Patients need to come first, and the decisions that we make need to be guided by science and data, congruent with the law,” he said.

If he is confirmed by the Senate, Dr. Hahn would fill the vacancy left by Dr. Scott Gottlieb, who stepped down as commissioner in April. On Tuesday, five former commissioners, including Dr. Gottlieb, endorsed Dr. Hahn.

Dr. Hahn’s views on how vaping products should be regulated would occur at a critical juncture, as e-cigarette companies begin submitting evidence ahead of a May deadline to show that their products do more good than harm. He will have to balance public outcry over teen vaping use with intense lobbying by e-cigarette manufacturers and vape shops that argue their products provide an alternative to traditional cigarettes and their users make up a potent voting bloc.

The federal government has repeatedly weakened or delayed efforts to rein in vaping products over the past decade. In 2016, the Obama administration backtracked on a proposed ban on flavored e-cigarettes, and in 2017, Dr. Gottlieb extended a key deadline for vaping manufacturers to provide evidence about their products’ effects on public health.

If he is confirmed, Dr. Hahn has said he would divest his interests in dozens of companies that do business with the F.D.A., from Coca-Cola and Starbucks to technology companies, like Alphabet, the parent company of Google, which is developing health care products. He also said he would resign his positions at institutions like M.D. Anderson, the University of California San Francisco Helen Diller Family Comprehensive Cancer Center and the University of Pennsylvania. He said he also would recuse himself from discussions involving those institutions for a year after his resignations.

The committee chairman, Senator Lamar Alexander, Republican of Tennessee, said a vote by the committee on Dr. Hahn’s nomination is expected in early December.