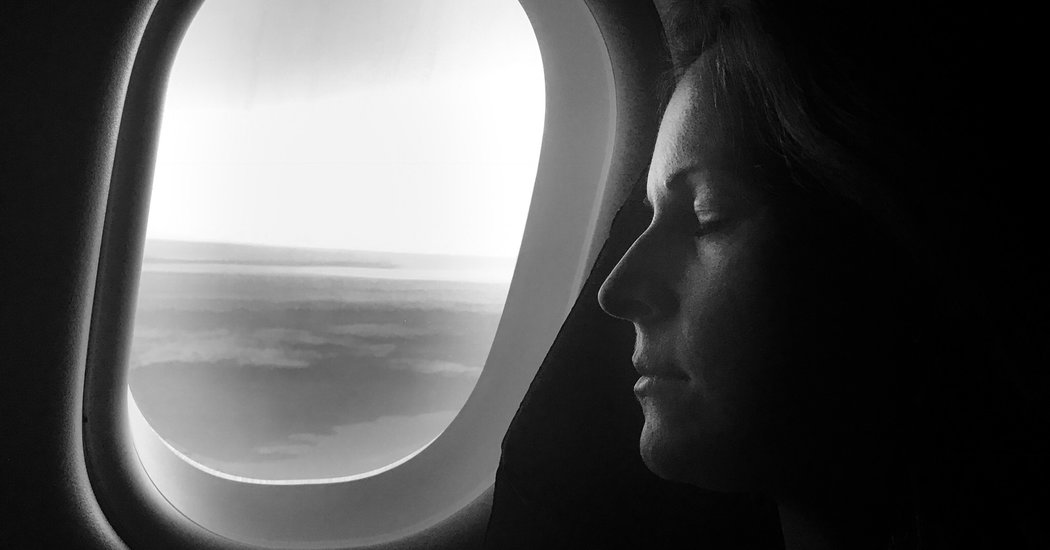 If I had to fly standing on my head to avoid the jet lag unleashed by 13 time zone changes, I would have. Instead, while everyone else dined on the night flight to Singapore, I sat in the dark, and, after we arrived, rotated like a sundial around a south-facing office window.

This jet-lag remedy was prescribed by Timeshifter, an app that is among a spate of new approaches to what scientists say is the cause of jet lag: Out-of-whack circadian rhythms, also known as your 24-hour biological clock.

Circadian science, newly embraced by airlines, hotels and airport lounges in the form of light therapy, prescribes bright light for wakefulness and warm light to prepare to rest. Light exposure helps reset the clock, according to the National Sleep Foundation.

“Nearly all species have an internal or circadian clock which has evolved to allow us to interact with the outside world,” said Steven W. Lockley, a sleep expert and associate professor at Harvard Medical School. He has worked with NASA astronauts using circadian science to boost their alertness, and is a partner in Timeshifter. “It anticipates environmental time so we can be ready at the right time to find food, avoid predators and find a mate,” he added.

Jet lag happens when we travel too fast for the brain to adjust. “We’re used to shifting the biological clock a few minutes a day in response to seasonal changes, but we haven’t evolved to shifting several hours a day, which is what happens when you cross time zones,” he said. “It takes some time for the body and brain to catch up.”

Now the travel industry is catching on. In October, the Australian airline Qantas tested a New York-to-Sydney flight that included monitoring passengers for movement, light exposure and attention. The research will be used to determine, among other things, whether the standard order of events on night flights — meal service and dimming the cabin lights — should be altered to help passengers adjust to the destination time zone.

This month, United Airlines introduced a partnership with Timeshifter that offers free access to members of its frequent flier program, MileagePlus.

Some airport lounges have installed special lighting to help passengers shift. Before their 17-hour flight to London from Perth, Qantas passengers in premium cabins can use the international transit lounge, which includes “body clock intervention light therapy” in its bathrooms to increase alertness. The SAS premium lounge in Oslo has a “daylight booster zone” that exposes fliers to artificial bright light.

Hotels are jumping on the circadian bandwagon too. The Tampa Marriott Water Street hotel in Tampa, Fla., has 35 rooms with “circadian mood lighting,” which changes hues to follow the solar cycle from bright to soft light.

Earlier this year, the Crowne Plaza Atlanta-Airport tested adjustable lighting in the rooms to allow guests to dial up alertness or dim to resting mode. Its parent company, IHG, said it will continue to test the technologies in 2020.

On my recent Timeshifter trial, I could compare the results to a miserable trip to Singapore two years earlier, in which I tried to sleep as much as possible on the outbound plane and was up half the night for days thanks to the 13-hour time difference.

Timeshifter considered my itinerary (from Chicago), my sleep type (early bird versus night owl) and my usual sleep routine (bedtime and wake time), and gave me a schedule to follow beginning a few days before departure. This included blocks of four to six hours in which I was supposed to “see bright light,” meaning outdoor light, if possible.

Aboard the plane, the app told me to take melatonin, a sleep-related hormone sold as an over-the-counter supplement, and go to sleep immediately (the use of melatonin and caffeine are optional, but help, say the app developers). I put on eye shades and noise-cancelling headphones and stayed in the dark for seven hours, most of them sleeping, but several impatiently wondering if I should just give in and watch “Rocketman.” Mid-flight, I was prompted to wake up, use caffeine and “see bright light.” I ordered coffee, turned on the overhead lights and watched movies with the screen dialed up to its brightest while everyone around me slept.

In Singapore, I felt clearheaded and was able to focus during afternoon meetings despite landing there at 7 a.m. local time. I followed the Timeshifter schedule, which dictated periods of bright light, some light, avoid light (or wear sunglasses if you can’t) and sleep for each day abroad and four days after my return. It took strict adherence, but it worked.

Not everyone has had such results. Melisse Gelula, the New York-based co-founder of the media company Well + Good, has tried Timeshifter twice on Asia trips and said the results were better with the app, if not fully curative.

“I found it hard to abide by some of the directions, which I’m sure would have been beneficial,” she said. “I couldn’t wear sunglasses in meetings in the middle of the day.”