The Snowiest Mountains: Where to Ski, and When 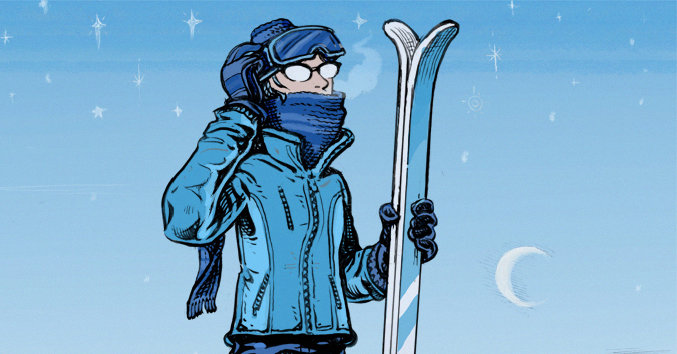 Great snow conditions can make a ski trip magical. Skiers can weight the odds in their favor by picking their destinations according to the time of winter.

Two factors determine how a ski resort’s snow typically evolves across a season: snowfall and geography. Inside of those two elements, however, exist several layers. Here’s how to make sense of them.

Average annual snowfall tends to be the number that skiers obsess about more than any other. Yes, it’s important. But averages — even those based on 40 years of weather — omit much of the relevant data when it comes to snow.

For instance, a 350-inch average in the Rockies is more valuable to skiers than a similar average in California’s Sierra. The standard deviations of annual snowfall in California and along the West Coast are far higher than most of those in the Rockies, which means a 350-inch Sierra average usually includes multiple years of 600-inch winters and some in the 150-inch range. The feast-or-famine weather patterns mean that it’s far more likely that California’s Heavenly will go three weeks without snow compared with Colorado’s Vail, even though the resorts possess annual snowfall averages within 10 percent of each other. To be exact, 31 percent of winter months at Heavenly see fewer than 30 inches of snow, drought-like for out west; at Vail, only 11 percent of winter months are so lean.

Standard deviations matter less when planning spring trips, as it’s likely that enough snow has fallen at that point to fill the slopes. But standard deviations are paramount when considering early season trips, when the winter is young and ski resorts with higher propensities for drought and rain stand higher odds of having small amounts of terrain open.

Three attributes matter most when it comes to geography and snow: slope aspects, elevation and latitude.

The direction a ski resort’s slopes face plays a major role in determining how well they preserve snow. It’s especially relevant from February into the spring, when the sun’s angle in the northern hemisphere goes from oblique to more direct. The best mountains for spring skiing have good amounts of north-facing terrain, which keeps snow shaded and cold. Conditions at resorts that largely face other directions can degrade quickly in any sunlight, especially in the spring.

The other two geographic factors that matter most: elevation and latitude. High altitudes see fewer rain events and stay colder, preserving snow. California’s Mammoth is a far better bet in the spring than is Squaw Valley, as its base area is 1,753 feet higher. Latitudes farther north help, too, as they receive less direct sunlight and have cooler springs. The best ski resorts further south in North America, for that reason, tend to have high elevations that provide a counterweight to their latitudes: Telluride, Taos, Wolf Creek and Silverton all have in-bounds terrain at or near 12,000 feet.

Where to Ski in the West

Those who haven’t booked their trips yet should find a pencil now, as mashing up all these factors helps to determine when to go where.

Some resorts make for great snow bets all season, from the holidays to spring break. These places have large annual snowfall averages, smaller standard deviations and plenty of north-facing terrain: the leaders here are Utah’s Alta, Snowbird, Brighton and Solitude. These spots benefit from the funneling effect of the Wasatch’s Cottonwood Canyons, which squeeze significant amounts of snow out of insignificant weather systems. In Colorado, the most consistent bets across the entire winter are Wolf Creek, Winter Park and Loveland, which all combine high elevations, lots of north aspects and some of the larger snow averages in the state.

For skiers looking toward the holidays around New Year’s, Colorado’s Steamboat and Wyoming’s Jackson Hole perform well here. These resorts’ smaller amounts of north-facing terrain matter less in the darkest days of winter, and both receive lots of early snow. In the Sierra, where standard deviations are high, Kirkwood and Mammoth provide skiers the best options across the entire winter, including the holidays, to find good snow. Farther up the West Coast, Oregon’s Mt. Bachelor gets steady snowfall and has a good early winter record. In British Columbia, Whistler-Blackcomb, where the low-base elevation has less effect during the coldest time of the year, is a good pick.

Where to Ski in the East

In the east, three ski resorts stand out for their natural snowfall, all of them in Vermont: Jay Peak, whose frequency and quantity of snow would be excellent even in the west; Stowe, whose location on the east shoulder of Mt. Mansfield brings it plenty of snow; and Smugglers’ Notch, just north of Stowe, which has a similar snow profile with more than 60 percent of its terrain facing north. All three are good bets throughout the season.

In the spring, Sugarloaf’s northerly Maine latitude and its north-facing terrain — 70 percent of the resort — make it a plum pick. Maine’s Sunday River is also a good spring option, with 50 percent of terrain facing north. Just to the northwest of Killington in Vermont sits the smaller Pico Mountain, which receives similar amounts of snow, but features 85 percent north-facing terrain at a high-for-the-east base elevation of 2,000 feet, making it an elite preserver of snow.

Christopher Steiner is the founder of ZRankings.com, which uses data, including those from Bestsnow.net, to score ski resorts based on their snow history, terrain and preservation characteristics. He has written two books and was a staff writer at the Chicago Tribune and Forbes magazine.