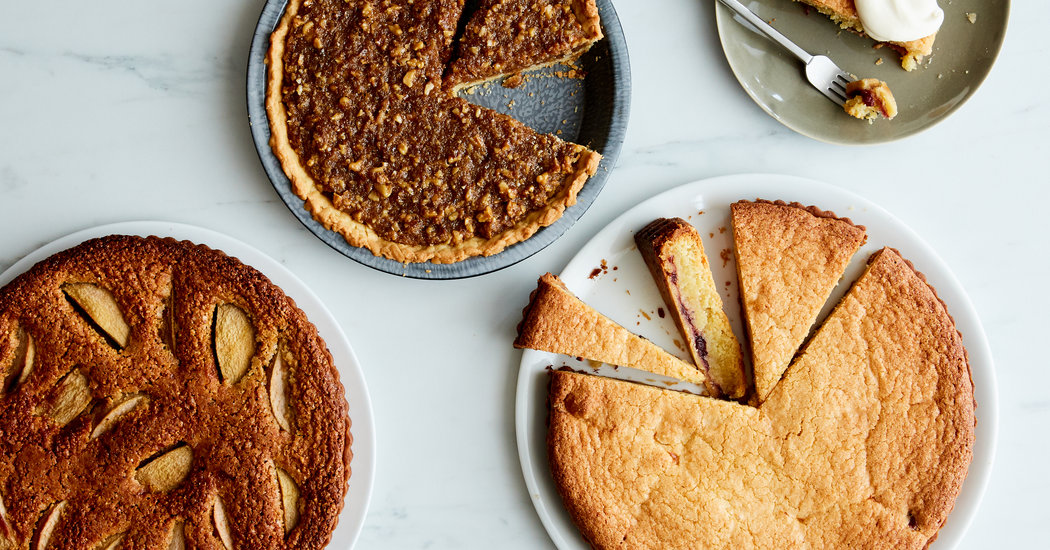 When I first started to grate and press out short-crust pastry, rather than roll it, I’d show up to any breakfast or birthday with a pie in hand. I’d lurk near my dessert so I could read lips after people took their bites. “She’s a chef,” they’d say, to explain my dangerously tender, crisp crust.

I discovered the technique in the first professional kitchen I worked in, where I was charged with making the restaurant’s classic lemon tart. Terror that mine would be more “bake sale” than “Michelin star” was replaced by confidence and a baking obsession when I learned the simple secret behind their perfect pie. It’s rare that a shortcut actually makes food better, and this one does.

I’ve subsequently renounced flakiness, crimped edges and latticed lids in favor of grated crusts just thick enough to cradle wobbly curds, and tender enough that they crumble when I try to eat a slice like a piece of pizza, without a plate.

And I still feel the glow when my pie crust is praised — no longer at the suggestion that I’ve mastered the advanced skill of rolling out pastry perfectly, but rather, because I haven’t. For this reason I consider a box grater to be the great pie equalizer. Anyone can trade in the stress of “forming a disk,” of searching for a wine bottle to use as a rolling pin, of transferring torn pastry to its dish for this easy route to perfection.

Unlike rolling, which can toughen pastry by developing the gluten in the dough, grating breaks — or shortens — the protein chains, which leads to extra tenderness. Pressing the strands of grated pastry directly into the pie plate makes patisserie-thin crusts achievable, without much practice.

A good result with this method requires extra-cold dough, made with any short-crust or pâte sucrée recipe. (I double my recipe and freeze half so I have an excuse to make pie another day.) Working from the outside to the center of the dish, I grate about a third of the dough block at a time. When I press it into the dish, I do the sides first, seam second and center last. I pull the pastry up above the sides of the dish to counteract shrinkage and get a rustic finish. I use the edge of my thumb to even the join between the side and base of the dish. The result is dappled with fingerprints but generally even.

I’ve pressed out pies without a grater, too, by slicing thin sheets of chilled dough and joining them like tiles in the dish. In a rush, I’ve skipped forming and chilling the dough block altogether by pouring the sandy mix straight from the food processor into the pie plate. This is clumsy, but can still make a better base than a tough, thick one that’s rolled out badly.

I pay particular attention to blind-baking: Judging when to add the filling to the parcooked pastry is as important as the pastry’s shortness and depth. Most people add their fillings too soon and end up with a soggy bottom. Ideally, the center of the pie should just finish cooking just as the butter in the crust turns nutty; I work backward to synchronize the timing. For fillings that take less than 30 minutes to cook, I prebake the base to biscuity completion. For those that need more time in the oven, I cook out the flour in the base completely but leave it blond.