The Red Coats Are Coming 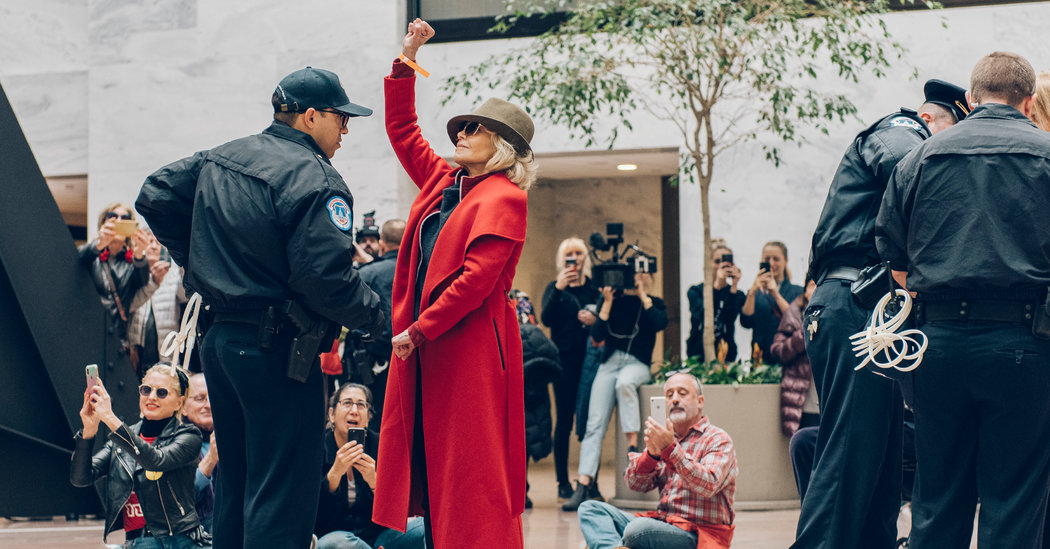 Forget the power shoulder. These days, it’s all about the power coat. At least when it comes to Jane Fonda — and, perhaps, to those who would follow her example.

We are speaking, of course, of the five-alarm, bright red coat the actress and activist wore last Friday (or last #firedrillfriday, as she has designated them) as she protested at the National Capitol to raise awareness about the climate crisis. The one she has worn every Friday for the last five Fridays, and will wear tomorrow, and continue to wear every Friday through the end of the year.

The one she is wearing in the video she posted on her website explaining her actions. The one that she says is the last piece of clothing she will ever buy.

The one that has, like the burnt orange MaxMara coat Nancy Pelosi wore back in December when she confronted President Trump after her return as speaker of the House, provoked a viral obsession thanks to its ability to represent visually the issue Ms. Fonda is raising verbally (and physically), while also looking deeply chic.

According to a recent article in The New York Times, the idea of wearing red came from discussions over Labor Day weekend between Ms. Fonda and some of her friends, as well as the author Naomi Klein, Annie Leonard of Greenpeace USA and the environmental activist and author Bill McKibben.

How, exactly, participants wanted to interpret the red in garment form would be up to them.

In some of the arrest photos of Ms. Fonda, you can see other celebrities adopting the tactic. Sam Waterston seems to be partial to a burgundy-tone cable-knit sweater; Ben Cohen of Ben & Jerry’s wore a Crayola red polo over a long-sleeved gray T-shirt; the activist Jodie Evans wore a lush velvet cherry red coat. (Ted Danson, who was arrested in a gray crew neck, did not seem to have gotten the message.)

But none of the garments have the clarity and impact of Ms. Fonda’s coat.

Ms. Fonda went to Neiman Marcus to buy her version, on sale. We don’t know the label (when asked, Ms. Fonda told The Hollywood Reporter she could not remember, though she did say it cost $500). It has a large shawl collar and belt, which she sometimes leaves undone. Speculation has centered on a Mackage style. If, indeed, it is her last fashion purchase, it was a good one.

The coat does everything it needs to do. It is unmistakable in a crowd and sends a message: Warning! Our house is on fire! Urgent action is needed! It also provides warmth and some comfort during Ms. Fonda’s time in jail. It has become so immediately recognizable that it was its own Halloween costume.

One Twitter observer noted: “BTW, I hope that red coat ends up in the Smithsonian.” It probably should. It has made that rare but historically significant leap from garment to symbol: of a time, place and movement.