The Gift of the Missing Men 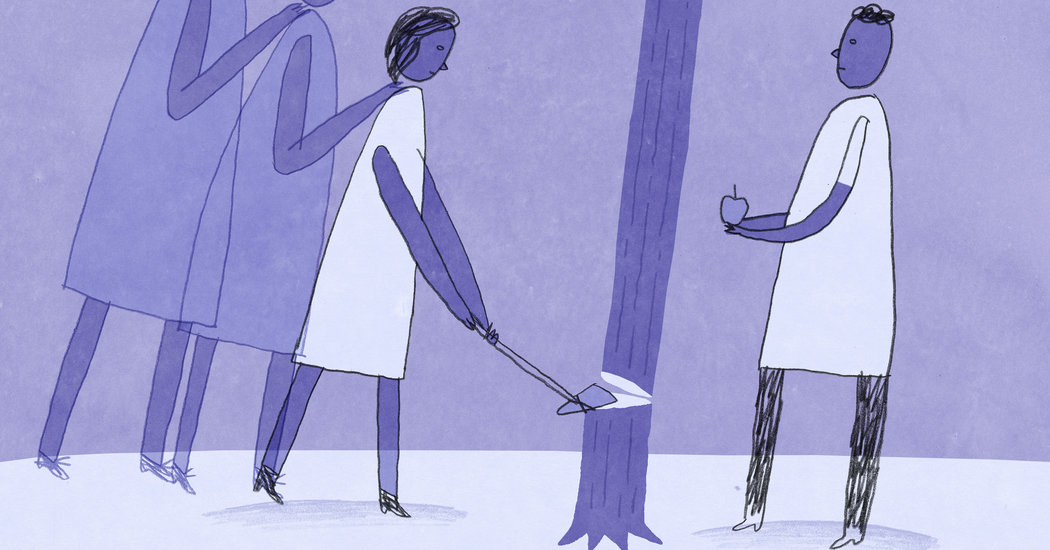 I am the daughter of a “holiday man,” a term my grandmother used to describe three generations of our family’s absentee fathers who, like clockwork, would return around Christmas before disappearing again to whereabouts unknown.

Back when I was coming-of-age and grappling with the absence of my own father, my grandfather, a former holiday man, was trying to pay his penance. Unknown to his second wife, he had begun spending a lot of time each week at our house near the bayou where my grandmother, mother and I lived. A gardener, he planted his remorse in the soil where it blossomed into a lemon tree and then a fig tree, and then a plum, orange, peach and apple, all lined up in a colored row behind our garage.

“They always come back,” my mother said as my grandfather gardened. “They always realize their wrongs.”

But I was far more concerned about the origin of what appeared to me to be a disturbing and seemingly unavoidable pattern in choosing the wrong men.

That was the thing about holiday men: They were cruel, but they were dazzling. When they deigned to pay attention to you, even for five minutes, it felt like love.

My father, who is almost a decade younger than my mother, was, to me, undeniably cool. I would gush at the way he stretched out his “heyy”s and marvel at his strength and big smile.

When he took me out for drives, it didn’t matter that he was blaring music that my mother never let me listen to, music that was so loud it was impossible for us to talk during the limited moments we had together. A true act of love was watching him turn down the volume whenever I’d pipe up.

Each December, when he would call to say he was coming over, I would brush my hair and put on clothes that were nice but didn’t look like I was trying too hard. I would run back and forth to the window, excited for the moment when his white pickup truck would pull into our driveway.

He would sit next to me, cologne filling the room, his snakeskin boots wild against our Persian rug, and together we would stare ahead at a Christmas scene that was two days old. He would get everything wrong, from how old I was to what school I attended to how many suitors I had (at the time, none).

Within minutes, he would slap his knees and tell me he had a party to go to. I would wait for his white truck to disappear before bursting into tears.

“Daddy loves you,” he said one last time when I was 17, surprising me by apologizing for not being around to raise me, promising he would do better, be better.

“Maybe this is what my mother meant,” I thought. “Maybe he’s realized his wrongs.” But I never saw him again.

I quizzed her and documented her every misstep in love, determined to avoid her fate as I headed off for college to find a husband who was nothing like my father.

But the Pavlovian cycle had hooks, and I was immediately drawn to burgeoning holiday men. Men who disappeared when you mentioned the slightest discontent. Men who promised to text but never did. Men who professed their affection before revealing a girlfriend I hadn’t known about.

This, I figured, was normal. In my mind, true love was a toxic, complicated, all-consuming mess. Messages confirming this belief surrounded me. When I first saw “Sex and the City,” I rooted for Carrie and Mr. Big. When Lana del Rey’s “Blue Jeans” came on, I would sing along: “Love is mean. Love hurts.”

But the list I made with my mother failed to account for what the holiday men had left in their wake: a resilient, quick-witted tribe of matriarchs who didn’t miss a beat when their husbands fell short of their vows. Instead, they cut them off and shielded their offspring from the same hollow attempts at love.

I had put finding love on a pedestal in my teenage years, and as such, I had been so busy pitying the matriarchs’ plight that I ignored their power. My grandmother, the first in her family to attend and finish college, had raised two Harvard graduates on her teacher’s salary: my uncle, who became a doctor, and my mother, who became a lawyer. Years later, she stepped in to help raise me when my mother’s marriage fell apart.

Checking up on my homework, my grandmother would point to her head and say, “What you have up here, no one can take away from you.” Dragging me to church and volunteer events, she showed me how giving back was the best thing we could do with our blessings.

One day she saw a woman sobbing in Starbucks and, to my embarrassment, went up and offered her the pack of tissues that she always carried in her purse. She taught by example that we needed look out for other people.

My mother, the breadwinner and provider, also gave me everything my father couldn’t: strong values, tough love, weekend drives to theater and choir and dance practices on the other side of town. She worked late nights to put me in the best schools that led me to a Harvard education, one that she had been saving for since before I was born.

Because of the holiday men, I was surrounded by fundamentally good, loving and formidable women who pushed me to think for myself when I asked for another’s opinion, to save my tears whenever I cried over something trivial, to strive to learn as much as I could because knowledge would be my power.

Years later, when I would rewatch “Sex and the City” and roll my eyes at Carrie and Big, I met my now fiancé. Even though I had been raised on my mother and grandmother’s love, I was confused by the ease and kindness of our courtship.

At times, I saw a lack of pain, drama and games as a sign that something was wrong with us. I poked and prodded, picking fights designed to reveal any holiday man tendencies before I got hurt, before I became too invested.

I was puzzled when he didn’t run as I began to expose my flaws and confused when I carefully laid out every test meant to drive him away. He remained unfazed and rooted by my side. I was acutely aware when he would listen quietly to my every word — not blasting music or checking his phone, but waiting for me to articulate my thoughts, no matter how inconsequential.

I was surprised even more by the way his eyes would spark when I challenged his stances or talked about gunning for a promotion. But it clicked one night after I had stayed out late with my girlfriends and returned to find him sleepily propped up on the couch, waiting up until I got home safely, as he would do time and time again — exactly as my mother and grandmother had done during my high school years.

No holiday man had ever done that for me.

The head of our matriarchal crew died this past February, almost a year before my wedding. It was a loss that left me in awe of her sacrifice and her willingness to infuse me with her goodness and strength.

“The ears,” my mother kept reminding me, “are the last thing to go.”

So as my grandmother was leaving us, as she slipped into another world, I held her hand, leaned in, and thanked her for being the gift that the holiday men left behind.

Emmanuel Olunkwa: A Multifaceted Designer Gets a New Platform With Pin-Up Magazine
18.09.2021

Some Rich People Are Counting Their Antibodies ‘Like Calories’
18.09.2021