The Flooding of Venice: What Tourists Need to Know 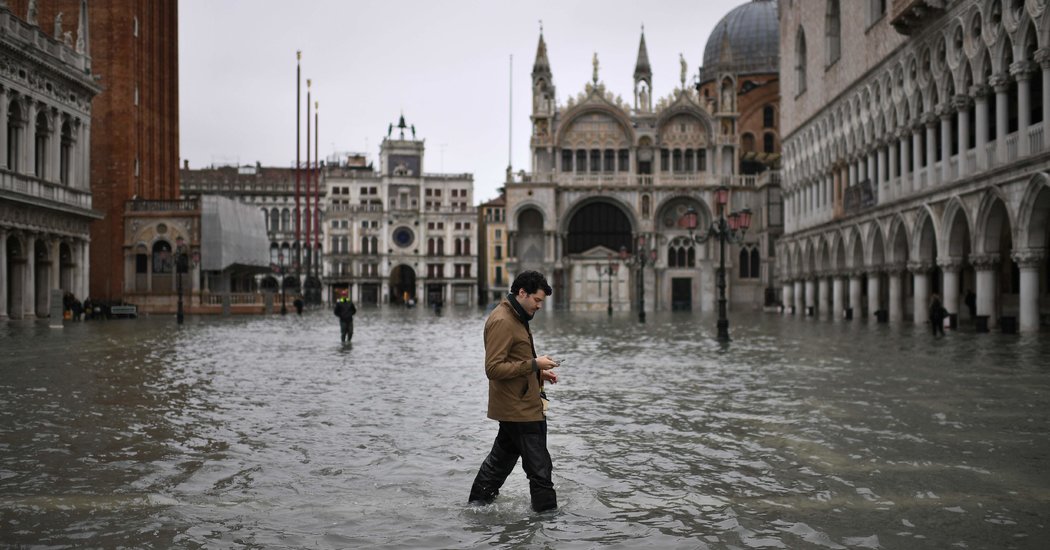 The high water that devastated Venice this month — flooding its streets, its squares, its landmark churches — has prompted a political storm in Italy, fresh concerns about climate change and debates about how to protect one of the world’s most treasured cities.

But for many, many tourists who themselves often inundate the city, the high water has provoked a more immediate question: Can we still go to Venice?

The short answer is yes, even though some travelers appear to be worried: Venice hotels reported a 35 percent cancellation rate for the upcoming month, according to a local association, putting a dent into what is a €3 billion (about $3.3 billion) a year industry.

As the rains continue to fall on northern Italy, and the high tides swell in the Venice Lagoon, here is some basic information that any traveler to Venice should know about in high water season.

Where is the water coming from?

The city was built on a group of islands and islets in a lagoon separated from the Adriatic Sea by a thin stretch of land. Two rivers empty out in this lagoon, or laguna.

Three canals run through that stretch of land, allowing in ships — and Adriatic Sea water. When the tide rises, the seawater enters the laguna; when the tide falls, it exits. That happens twice a day, every day, resulting in a mix of seawater and fresh water.

Besides being brackish, Venice’s water is also highly polluted, since sewage water continues to be dumped in the canals. Sometimes strong winds and bad weather contribute to unusually high tides, which typically last between two and four hours.

They are known as “acqua alta.”

What is acqua alta?

When Venetians talk about acqua alta, they mean a tide of 80 or more centimeters (about 2 feet) above the mean sea level. It’s a recurring phenomenon, especially in November and the winter months. Every Venetian local has a pair of galoshes. All the stores have glass barricades on their doorsteps.

Venetian authorities consider any tide above 140 centimeters (4.5 feet) to be “exceptionally high,” and sirens sound around the city to let locals know it’s coming. In recent years exceptionally high tides have become more common, including four this month alone.

St. Mark’s Square, the most famous and vulnerable part of Venice, is also one of its lowest points, so an acqua alta of 140 centimeters above sea level would result in 60 centimeters of waters flooding the square, according to the city’s official tourism website. But half of the city would remain dry.

That’s not what happened this time.

What was so bad this time?

A combination of rising tides and winds of more than 75 miles per hour from two different directions caused massive waves to crash into Venice.

St. Mark’s crypt and mosaic floor have been damaged, the baroque church of St. Moses and the city university, in a 15th-century Gothic palace, have been flooded. A man died from electrocution when the water caused a short circuit. The city’s mayor called it “a disaster,” and the local governor likened it to “a scene of devastation from the Apocalypse.”

“Those are the effects of climate change,” Mayor Luigi Brugnaro tweeted.

The climatic conditions certainly did not help. But neither did the steady digging of the canals to allow bigger vessels — particularly cruise ships — into the canals, allowing more water into the lagoon.

Andreina Zitelli, an expert on environmental assessment at the University of Venice, said that since the lagoon was modified for larger ships in the 1960s, the “more you dig, the more water you get.”

What to expect now

Those who wish to avoid the risk of acqua alta should avoid Venice in November and December.

“Until a few decades ago, the tourism season ended in November and reopened with the Carnival,” said Matteo Secchi, a hotel worker and community activist in Venice.

But a growing number of travelers have been coming on this traditional off-season. “Mass tourism changed everything,” Mr. Secchi said.

If you do decide to visit during these months, it’s advisable to pack galoshes, or hip waders. (And perhaps reconsider bringing a roller bag.) If you arrive unprepared and the water comes up, newsstands offer plastic bags that cover your leg up to the thigh, but they tend not to last long before the water finds a way in.

And understand that some of the popular sites may be inaccessible. The Florian and Gran Caffè Quadri, two of the most famous cafès in St. Mark’s Square, remain closed. La Fenice Theater only recently reopened, and you may want to skip Piazza San Marco and visit the Jewish Ghetto instead, which is less vulnerable.

But if you happen to get stuck in St. Mark’s in the midst of an acqua alta, sit down in a cafe and remember it will go away in a few hours.

“We hate it when tourists do that,” said Mr. Secchi.