The Delay Game Was On 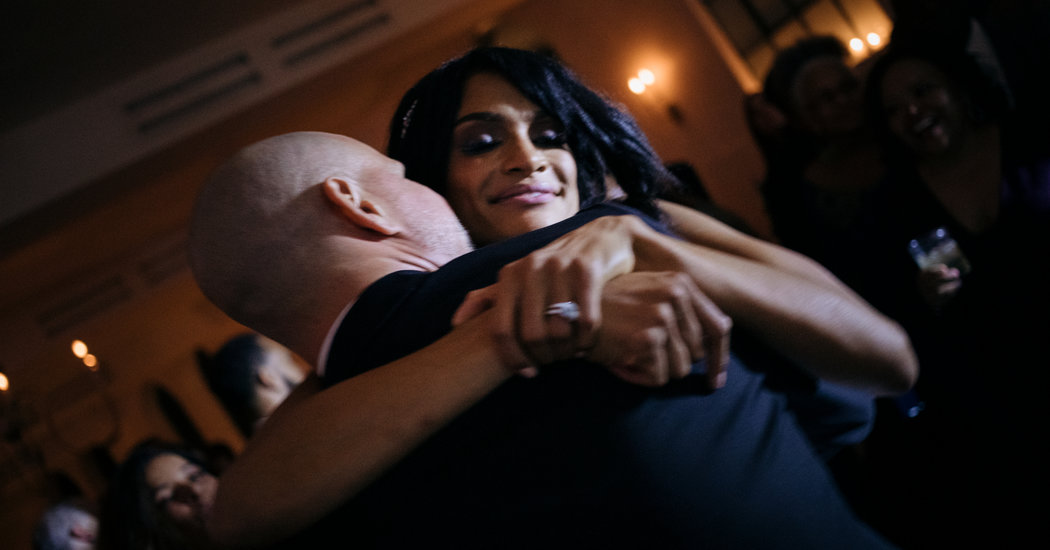 When Taryn Brown and Nicholas Blatchford first met in 2005, he was giving her a tour of the Bronx high school he was using as a makeshift base for New Heights, a basketball-focused youth development program he had started a few years earlier.

A mutual friend thought Ms. Brown, then working as a political fund-raiser, might be able to help him with donations for the organization.

But both quickly realized they had more than a professional interest in each other.

“As soon as the elevator doors opened, she lights up the room and I was like, ‘Wow,’” said Mr. Blatchford, 47. “I just picked up on that energy.”

He asked her out that same day.

They bonded in part over their mutual love of basketball. Ms. Brown was a star athlete in high school in Memphis before playing center at the University of Texas. Mr. Blatchford played receiver on the Duke University football team and then coached basketball while teaching in public schools in Washington Heights before founding New Heights, which aims to use basketball skills to draw children into academic programming and then match them with scholarships to top-notch schools.

Despite feelings for each other, they broke up after eight months. Ms. Brown decided to pursue a law degree at Tulane University in New Orleans, the city of her birth and her mother’s hometown but a place she’d never really lived before.

Hurricane Katrina had devastated New Orleans just a year before and Ms. Brown, whose law school class was the first to start after the storm, wanted to reconnect with family there and play a role, however small, in the recovery.

Although the distance was the immediate reason for the split, Ms. Brown, then still in her 20s, also wasn’t sure she was ready for something as committed and serious. “I just felt like I was too young to be married,” she said.

The pair lost touch as Ms. Brown immersed herself in law school and life in New Orleans while Mr. Blatchford poured much of his life into building New Heights into a thriving nonprofit organization and then starting a career in sports marketing.

“We were together less than a year and it was awesome, it was intense, but the timing just wasn’t right,” Mr. Blatchford said. “Taryn left to go to law school and moved on with her life and I moved on with mine.”

Both of their mothers, though, couldn’t quite shake a feeling they might end up together. Ms. Brown made an instant impression on Winifred Blatchford, Mr. Blatchford’s mother, on a visit to her home in Washington, D.C., bonding over a shared love of Jane Austen’s novels. “I loved her right away,” Mrs. Blatchford said.

Mr. Blatchford’s mother remembered being “heartbroken” when the pair broke up. She kept a flower vase Ms. Brown gave her when she first visited, holding onto it through several moves. “I said, ‘Damn it, I’m going to save that vase because they’ve got to get back together,’” Mrs. Blatchford said.

Laurie Guimont Guillaume, Ms. Brown’s mother, was equally sold when she met Mr. Blatchford on a visit to New York. She was particularly charmed by his drive and dedication, which she thought perfectly matched her own daughter’s intense work ethic and ambition.

“I was so impressed by him,” she said. “He was always the guy who, as a mom, I thought would be the perfect partner for my daughter.”

Although Ms. Brown dated plenty of other people in the intervening years, her mother said she’d keep asking her about the charming guy she had dated before law school. She recalled once bumping into Mr. Blatchford while at a restaurant in New York with her daughter.

“I thought, ‘Oh my goodness, this is such a great match, made in heaven. I just don’t think she gets it yet,’” Ms. Guillaume recalled. “You know what they say, timing is everything — and eventually, timing meant everything.”

Still, an entire decade went by without either getting back in touch. Although Ms. Brown moved back to New York after graduating from Tulane to take a job in corporate law, they didn’t reconnect until years later.

Then, in 2016, they found themselves back in sporadic contact. Neither can recall exactly who reached out first but, just like the first time, their jobs and mutual interest in basketball played a big role.

So too did a dream Mr. Blatchford had about her one night in Baltimore, where he’d moved to be the director of sports marketing, focused on basketball, at Under Armour, the Maryland-based athletic apparel company. (Mr. Blatchford left the company in mid-October and, he said, will be pursuing his own sports-related venture.) When he woke from the dream, Mr. Blatchford sent her a text checking in on her.

Ms. Brown had left the law firm for a job as corporate counsel at Legends, a hospitality and sports management company co-owned by the New York Yankees and Jerry Jones, the owner of the Dallas Cowboys.

Both Ms. Brown and Mr. Blatchford, it turned out, were working on projects with the University of Texas. Ms. Brown had stayed in touch with some of the people she met while playing college basketball there. Mr. Blatchford had become friends with coaches there over his years of involvement in the sport, so the two began sharing occasional notes or insights.

The exchanges blossomed into a tentative friendship. When Mr. Blatchford moved back to New York in summer 2016, he asked Ms. Brown to scout an apartment for him.

Back in the same city, they occasionally ran into each other or met up to watch games. Although their friends now say they long thought the two might hit it off again, neither Ms. Brown nor Mr. Blatchford initially saw another go-round in their future.

“We weren’t dating at all,” Ms. Brown said. “We would see each other out. We definitely were dating other people, both of us.”

Mr. Blatchford asked if she’d come along to an early evening college tournament game between Minnesota and Alabama on the Saturday after Thanksgiving in 2017. She readily agreed, “not thinking anything of it.”

Ms. Brown talked on the phone with her mother as she waited for the train to the Barclays Center in Brooklyn. Ms. Guillaume said she tried to come off as measured and cool, worried that overreacting would put her daughter off, but was thrilled to hear the two were meeting.

Her daughter recalls things quite differently, with her mother gushing about Mr. Blatchford’s charming eyes and smile. “And I was like, ‘Oh my God, Mom, we’re friends, quit being weird!’”

But those thoughts soon evaporated when she sat next to Mr. Blatchford in the arena and they fell into easy conversation. By halftime, Ms. Brown was texting her mother about how wonderful and easy to talk to he was.

“I was just thinking, ‘He’s everything I’ve been looking for and more,’” Ms. Brown said. “We both had grown a lot in our own different ways.”

Mr. Blatchford had come into the evening wondering if there might still be something between them. He’d been thinking about settling down with the right person and had come away from conversations with Ms. Brown earlier that summer thinking she could be a great partner.

“It was very clear to me, everything I loved about Taryn the first time around was still there,” he said of that night.

The game eased into dinner at a SoHo restaurant where Mr. Blatchford has a regular table. He then asked if she wanted to date again. She immediately said yes, touching off a whirlwind romance more than a decade after breaking up.

Within a month, Ms. Brown was on the phone with her father, telling him she thought she had found the one. For years he had told her that she’d simply get a feeling when she’d met the right person. “Then I got that phone call,” her father, Drew Brown III, said. “She said, ‘Dad, you’re right, I feel love.’”

She took Mr. Blatchford to visit her father in Atlanta in January 2018. Although Ms. Brown had dated many people and introduced them to her mother and brother, she’d never taken anyone to meet her father. “I’m very hard on people because I need to know their spirit,” said Mr. Brown, a former Navy pilot and part-time motivational speaker who has spent the last several decades flying for FedEx. “When I met him, I felt it right away.”

That August, Mr. Blatchford proposed during a trip to New Orleans for Ms. Brown’s 41st birthday. He surprised her by quietly inviting loved ones from across the country to join Ms. Brown’s friends and sprawling New Orleans family at an uptown bar.

They planned to wed the following spring in New Orleans, but a surprise pregnancy delayed those plans. Their daughter, Elliette Ann Blatchford, was born just before midnight on May 10, the couple’s original wedding date.

The couple married Oct. 25 at Felicity Church in New Orleans. Moments after their friend, Shavar Jeffries, who became a Universal Life minister for this event, pronounced them husband and wife, a brass band playing “When the Saints Go Marching In” shook the church and escorted the couple down the aisle.

It was drizzling outside on the cobblestone streets but the band marched on, leading a procession, called the second line, that included a pair of costumed Mardi Gras Indians through the rain to the reception at Il Mercato, an events space several blocks away.

Little Elliette, nestled in the arms of her grandmother and wearing a pair of pink earmuffs to muffle the noise, danced along as a family friend held an umbrella to keep her dry.

“I was not going to deny Elliette the second line,” Ms. Guillaume said. “It just hit me as one of those moments I will never forget for the rest of my life.”

Blessing in Hebrew and English Ms. Brown’s parents, who divorced many years ago, together gave the traditional Jewish Seven Blessings. Her father, who grew up Jewish in New York, chanted in Hebrew while her mother, a Creole Catholic from New Orleans, read the blessings in English. Both parents said the moment evoked Ms. Brown’s complex identity — she was raised with both faiths — and the further blending of cultures with Mr. Blatchford’s family. “You see the black and the white and the tall and the short and the Jew and the Christian,” Mr. Brown said at the reception, decked out in jewelry and taking a break from the dance floor. Said Ms. Guillaume: “Being a black girl, a black young woman, not everyone understands that she’s got a Jewish father who happens to be black and a Creole mother. That’s not very digestible to a lot of people.”

A reflection on Love Mr. Jeffries, the couple’s friend who officiated the wedding, reflected on Louisiana’s history of legal prohibitions against romances between races. “What’s interesting to me about these laws isn’t the bigotry of these laws but how strong love is,” Mr. Jeffries said. “People loved one another anyways. Love wins, love conquers all.”

Sports History Sports are woven into the family histories of both the bride and groom. Drew (Bundini) Brown, a grandfather of the bride, was a longtime assistant trainer and cornerman for Muhammad Ali. Mr. Brown is credited with coining one of boxing’s most famed phrases, used by Mr. Ali: “Float like a butterfly, sting like a bee.” Mr. Blatchford’s father, Joseph H. Blatchford, was a tennis player at U.C.L.A. and played at Wimbledon in 1956 before founding the volunteer aid organization ACCION. He was also tapped to lead the director of the Peace Corps under President Richard Nixon.