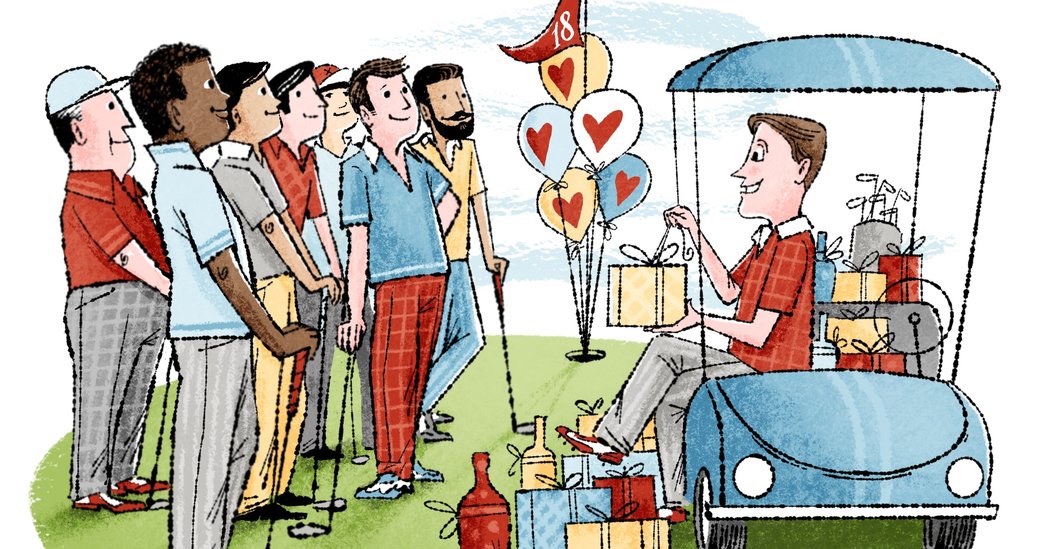 Man-showers or bro-dal showers, events that celebrate a man’s first step into marriage, are increasing in popularity. If the future bride can have a shower, why not the groom, too?

But do not mistake these for bachelor parties.

“The bachelor party is very different. It usually involves more money, a smaller, closer group of men, and it has a less sophisticated, wilder vibe,” said Alex Dulac, 40, the founder of the Plunge, a website for grooms. “Showers are more formalized. They’re laid back, generally happen during the day with a fun activity, and a broader group of people, like extended family, in-laws, co-workers, even your boss, who might be invited because there’s less bad behavior.”

Mr. Dulac, who is based in New York, said men have become more self-aware. “They’re looking to live more fulfilling lives,” he said. “They want stronger relationships that are deeper and purposeful. They want to celebrate this next stage in their life, and the people who have been on the journey to this awesome point.”

That means they won’t be keg chugging or other forms of debauchery.

Lauren Grech, the chief executive of LLG Events, a destination wedding planning company, based in New York, which she owns with her husband, Paul Grech, sees these parties as modernized versions of the farewell dinner. Ms. Grech said those dinners were popular in the mid-1900s.

“These were previously held in the groom’s honor, hosted by the father with friends and family making toasts on his behalf and to show support of the upcoming marriage,” she said. “Groom showers are a resurgence of this.”

Two years ago, Douglas Baumann, 30, and 11 other men celebrated their friend’s engagement by playing golf and then lunching at the Atlantic City Country Club. “It was his fiancée’s idea, which was smart because it gave him something special to do at the same time that she was having her shower,” he said.

Mr. Baumann, who is the general manager of culinary at the Diplomat Beach Resort in Hollywood, Fla., noted that it was the first and only bro-dal shower he has attended. A bachelor party followed months later for the same groom. “We did a drunken beach bar weekend,” he said. “But this was more structured and not crazy. It kept him busy and made him feel included.”

The bride and mother of the bride planning team has lost some of its grip in wedding culture, and often decision-making is being replaced by the couple.

“A shower, whether for a woman or a man, a straight or gay person, acknowledges a milestone,” Ms. Grech said. “For men, it’s acknowledging the fact that they’re taking more prominent roles in the wedding processes and it’s a way of giving him more attention beyond the bachelor party.”

It was that thinking that led John Berno and Christian Zavala, who met on the gay dating app Scruff in May 2017 and were engaged a year later, to plan two separate showers to celebrate their upcoming nuptials.

“I’ve always envisioned celebrating my wedding in a traditional way, but I never envisioned having a shower because it wasn’t a thing for men to have,” said Mr. Berno, 36, who had his shower Sept. 21 at his friend’s home in New Jersey. Mr. Berno, a licensed psychotherapist, lives with his fiancé Christian Zavala, 30, in New York. “Now it is, whether you’re straight or gay. It feels very fair because girls have so many events.”

Formal invitations were sent to 60 people, including family members, 30 male friends, and his grandmother, who attended the luncheon. During the party, speeches were made and gifts, that were pulled from his registry, were opened while everyone played newlywed bingo, among other games. “It felt very special and was a necessary wedding experience,” Mr. Berno said. “If I didn’t have the shower, I would have felt I was missing out on something important, that my wedding experience was incomplete.”

Mr. Zavala, who owns Zavala Interiors, an interior design company in New York, had his shower, a brunch, on Nov. 17, with 15-plus guests at his best friend’s home in Murray Hill.

“My bachelor party, which is happening in St. Lucia in March, will be a longer event and won’t be as tame,” he said. “This is a different experience. It’s a prequel. Some of my friends haven’t met each other, so it will be a nice way for everyone who is coming to the bachelor party to meet each other so they won’t be strangers.”

The pair, who are to wed May 16, 2020 at the Jane Hotel in New York, both decided not to invite each other to their showers.

“John did it traditionally,” Mr. Zavala said. “So I did, too. This is how they’re done. Even though this is new territory, there’s a structure that’s already there. So we’re following that while still making things our own.”

Aside from wanting the same experiences women have customarily received, Dr. Lara Friedrich, a licensed psychologist in New York who specializes in couples therapy, said some wedding planners and therapists attribute the bro-parties to embracing a man’s readiness to be vulnerable and the thought — What about me? I’m getting married, too!

“The definition of what’s masculine and what it means to be a man is changing,” said Dr. Friedrich. “The idea of the solitary man who doesn’t need connection no longer exists. Men are becoming socially able to value their friendships more and make that public. They’re O.K. with showing vulnerability.”

Brides, she said, have been at the center of the celebration, and that has left out men. “These parties are about how do we honor men, and this very big change that they’re entering into. And that was missing before.”

Dr. Friedrich predicts that male showers will eventually become mainstream. “As society continues to change, and as weddings continue to become more couple-centric, these events will become more popular,” she said. “More men want to celebrate these major moments. And people will continue to embrace and empower that desire. We are no longer solely focused on one gender.”

Mr. Berno agreed: “After attending mine, a lot of men said they wanted to have one, too. We all stood around wondering why this hasn’t been done before.”