Thanksgiving, When You’ve Got Nowhere Else to Go 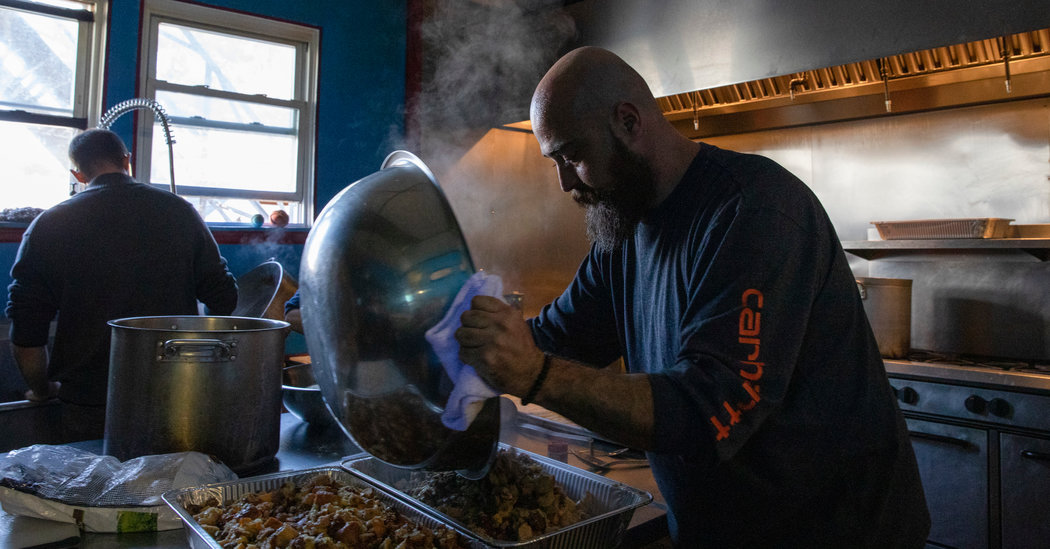 KINGSTON, N.Y. — Almost a week before Thanksgiving, residents at Chiz’s Heart Street group home begin their preparations. With six turkeys to defrost and brine, more than 50 pounds of sweet potatoes to cube and giant trays of stuffing to mix, this is not a one-day job.

The meal will be served family-style, but many of the 60 residents do not feel welcome or comfortable being around their own kin.

Often, they’ve come to live in one of the five houses in the complex from local shelters, psychiatric hospitals or jail. Almost everyone at Chiz’s has struggled with mental illness, substance dependence or both. Many have nowhere else to go.

A home-cooked meal is far from an anomaly at Chiz’s, a nonprofit organization that receives about 2,000 pounds of donated food every week. Rice and dried beans, stacked high in the warrens of the basement, are available to those in need through the Heart Street Pantry. Fresh produce, along with toiletries and warm socks, are also available.

“I try to put together stuff they would get in restaurants, stuff they remember from when they were kids,” said the head chef, Luis Warner, 37, as he chopped sweet potatoes.

Mr. Warner, whom Ms. Chisholm calls Fuzzball because of his bushy beard, used to cook in hotels and for conventions. But, he said, he lost his job because of his drinking. Before coming to Chiz’s, he lived in a local shelter, where the packaged food disgusted and disheartened him.

“My mind is half beaten up and I am served a cold chicken drumstick?” he said, shaking his head.

When he arrived at Chiz’s 15 months ago, after a short time in a shelter and on the streets, he vowed to use his experience in the kitchen to show his love and gratitude. Each day, he makes 90 to 120 individually-plated, fresh meals.

“We have a full sit-down dinner every day,” he said. “Families don’t even always do that, but this one does.”

About 100 people will come for the Thanksgiving meal, and he wants everyone to leave full — and with leftovers for the next day.

On Tuesday, he moved confidently through the bright blue kitchen, never consulting a recipe. He had turkeys to brine with butter, herbs, flour and “common sense.” He had apples to slice for stuffing, served with three different types of bread, pork belly and cranberries. He had sweet potatoes to roast with maple syrup and then purée with marshmallows, “like my mama used to make.”

“If I start talking to you about what you like to eat, where you came from, your history, your family, that’s a catalyst for communication,” Mr. Warner said. “It’s easy to talk when you’re eating something warm and comforting.”

For those trying to stay sober, the holiday can be difficult. As Ms. Chisholm walked by Willie Smith, a longtime resident, after lunch, she leaned in to sniff his jacket. “I’m just trying to figure out if you’ve been drinking or not,” Ms. Chisholm said.

Mr. Smith, 64, twisted sheepishly before confessing: “Yeah, I had a beer. Just one beer.”

She wasn’t kidding, but she flicked the strings on his sweatshirt, making him laugh.

“I love you, Willie, but no more drinking,” she said, with an expletive and a hug.

For many, especially those who grew up in the foster care system or suffered abuse, the holidays are painful. Christmas movies and Thanksgiving commercials on television are reminders of what they never had.

“These are people nobody cares about, except Chiz,” said Adalberto Félix, 53, an artist and resident who has struggled with anger issues and hallucinations. “It’s like, they gave up on them, their own families, everybody.”

Mr. Félix sees his 6-year-old son once every two months, but is estranged from his adult son, who is in jail. Mr. Felix said he does not speak to his siblings anymore and spends most of the day in his room, painting.

Mr. Coffey, 22, moved to Chiz’s from a psychiatric hospital a few months ago, and is struggling with a decade-long dependence on cold medicine.

“I worry about staying sober every day,” said Mr. Coffey, who has the 1-800 number for the suicide hotline tattooed in large numerals on his left forearm, where he can easily see it.

This Thanksgiving, he is planning to go to his mother’s house nearby.

“This is a step toward independence, a step in the right direction,” he said. “She is going to be proud of me for showing up sober.”

Most credit Ms. Chisholm with changing — or saving — their lives. A veteran of the Air Force’s 63rd Civil Engineering Squadron, she worked in California before moving east in her late 40s. She opened the shelter in 2004 and moved it to its current location in 2014. If they can, residents pay rent, usually up to $600 a month. If they can’t, they don’t, but they can stay.

Last year, Marshall Walden, 36, was homeless. Nicknamed Glow Baby for his changing hue of neon hair dyes, he spent that Thanksgiving at a nearby church, grateful to be sheltered from the cold.

“More than anything else,” Mr. Walden said, “it was lonely.”

He has been sober since last March and recently moved in to Heart Street, using his experience in hotel and restaurant kitchens to act as sous chef.

“I’m giving thanks for what I have,” he said. “I’m helping them out, but I’m helping myself, too.”