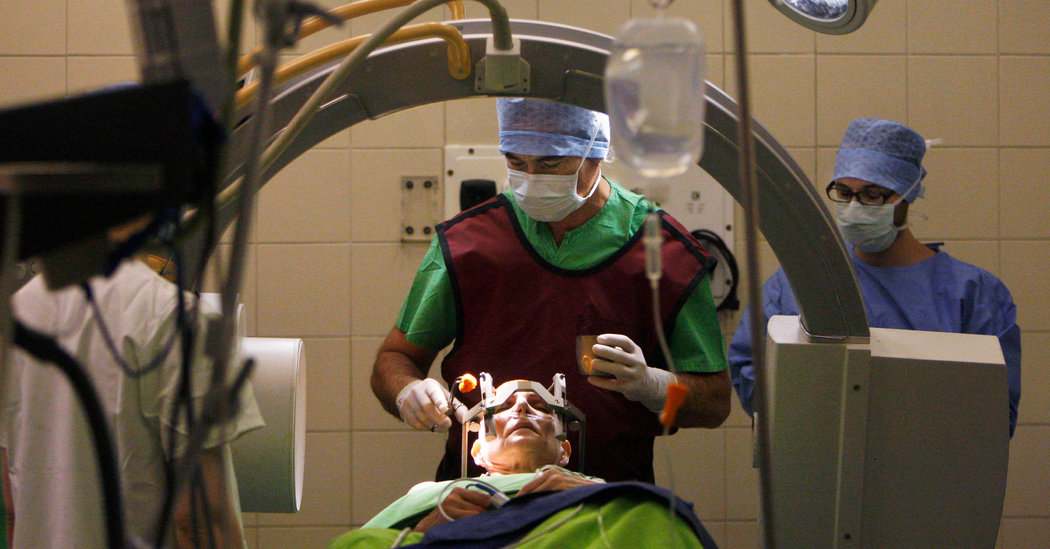 A lifelong swimmer leapt into deep water near his lakeside home, and was horrified to find himself completely unable to swim. Had his wife not rescued him, he might have drowned.

He had recently received an electronic brain implant to control tremors and other symptoms of Parkinson’s disease, and somehow the signals from the device had knocked out his ability to coordinate his arms and legs for swimming.

He was one of nine patients, all good swimmers despite having Parkinson’s, who had the same strange, dangerous side effect from deep brain stimulators.

Three of them tried turning off the stimulators, and immediately could swim again, according to an article in the journal Neurology by a medical team from the University of Zurich.

At first, doctors thought the case of the man in the lake was an isolated event, Dr. Christian R. Baumann, an author of the paper, said in an interview.

But when the same thing happened to another patient, one who had been a competitive swimmer, Dr. Baumann and his colleagues began to ask other patients about swimming. They found seven more cases among about 250 patients.

About 150,000 people worldwide have brain implants made by Medtronic, the leading manufacturer, the company said. Most had the implants for relief of Parkinson’s symptoms.

The swimming problem is not that common Dr. Baumann said, adding: “I think it’s a minority of patients. We find many who are still wonderfully able to swim and we don’t know why. We have no clue. They are treated in the same region of the brain. But this is life-threatening, and we need to pay more attention in the future.”

Despite the effect on swimming, he said all nine patients preferred to keep their stimulators on, because they provided so much relief from symptoms.

The Australian doctors said that three other patients with stimulators for Parkinson’s had drowned, and that they did not know if the deaths were related to the device.

Dr. Michael S. Okun, the medical director of the Parkinson’s Foundation, said the new report from Switzerland raised questions that needed more rigorous study. In any case, he said, all Parkinson’s patients, whether they have stimulators or not, should be warned not to swim alone, because the disease itself can make them suddenly unable to move and put them at risk for drowning.

Deep brain stimulators, first introduced more than 20 years ago, emit electrical signals that interfere with the abnormal electrical impulses in the brain that cause Parkinson’s symptoms. Sometimes described as pacemakers for the brain, the devices can provide great relief from tremors, stiffness and difficulty moving.

How the devices could interfere with swimming is not known. Dr. Baumann and his colleagues suggested that in some patients the signals may somehow affect a brain region that is crucial for coordinating limb movement. He said other complicated, learned skills might also be affected: Some patients said they could no longer ski after receiving stimulators, and one said he could not play golf anymore.

The earlier Australian report prompted Medtronic to post an “urgent field safety notice” in 2016, warning that a side effect of brain stimulators could be a loss of coordination that might leave a patient unable to swim.

The company said it had also notified the Food and Drug Administration, changed the labeling for the stimulators and sent the notice to 2,400 doctors who treated patients with the devices.

An F.D.A. spokesman confirmed by email that the agency knew about the safety notice and labeling change.

Abbott Laboratories and Boston Scientific also began selling deep brain stimulators within the last few years. A spokeswoman for Boston Scientific said in an email, “While there have been no reports of this type in our commercial surveillance activities, we will remain mindful of any potential, unwanted side effects.” Abbott did not respond to inquiries in time for publication.

Four Parkinson’s experts in the United States who were interviewed for this article said they had never seen the Medtronic notice or heard of the swimming difficulties.

“It’s a striking report,” said Dr. Joohi Jimenez-Shahed, the medical director of the movement disorders neuromodulation program at the Mount Sinai Medical Center in New York. “To see nine is a little surprising. It does add a little more weight to the observation.”

She said the report should be taken seriously, and patients should be cautioned not to swim alone. But she and other experts said they would like more information about exactly where the electrodes were implanted and what the pattern of stimulation was. Fractions of a millimeter can make a significant difference in the effects, she said.

Dr. David B. Weintraub, director of functional neurosurgery at Northwell Health in New York, called the report a “surprise paper” and said the effect seemed likely to be very rare. “O.K.,” he added, “maybe people need to be warned about swimming.”

He said that it was not fully understood how or why the brain stimulators helped people with Parkinson’s, and that the devices occasionally caused inexplicable side effects like changes in mood, double vision, tingling sensations or inability to speak loudly.

“There’s weird stuff that happens all the time,” Dr. Weintraub said, adding that most of the time, the device can be programmed to eliminate the problems.

“These studies in small numbers need to be reported to the wider community,” she said. “It’s how we learn about rarer side effects. We don’t want to alarm the community, but we want them to be aware.” It is too soon to tell how broadly applicable the findings might be, she said.

Dr. Baumann said that the patient who jumped into Lake Lucerne never swam again, but that several others did not want to give up swimming and were taking lessons to learn all over again.

Most pediatric spinal fractures related to not wearing seatbelts
14.05.2021
Latest
Go to Top