Suiting Up for the Impeachment Battle 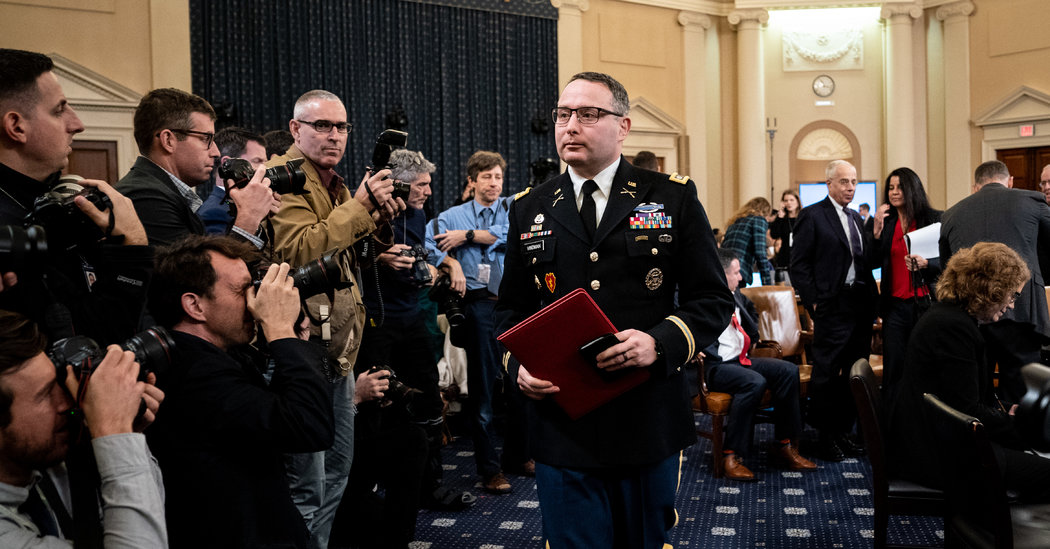 The fourth presidential impeachment hearings in the history of the United States, whose public phase came to an end on Thursday afternoon in the columned environs of the House Ways and Means Committee hearing room, may have hewed to decorum, but they were a battlefield nonetheless.

And it was clear in the optics of many of the witnesses, who dressed as if girding themselves for the thinly disguised war that their testimony would likely spur.

They may not have been wearing actual armor, but the references were impossible to miss.

It has escaped no one that while the purpose of public hearings is transparency, the side effect is theater. (Devin Nunes, the ranking Republican on the House Intelligence Committee, did keep calling them “a show trial,” after all.) And the audience was not simply the reality-television star whose administration is in the dock, or the body politic of the moment, but the body politic of the future. The images, and the words they frame, will also become part of history.

The actors in this drama are playing their parts and costuming themselves not just for the social media age, but also for posterity. How we present when we say something — our decoration, our camouflage — helps shape the way it is received.

There is a reason that both the bow tie of George P. Kent, the State Department official and witness, and the jacket of Representative Jim Jordan, ended up with their own Twitter accounts. (The bow tie actually has two.)

There is a reason that everyone became fixated on the seeming twinkle in Ambassador Gordon D. Sondland’s eye, the smile that seemed to play around his lips. They undermined the card-carrying-member-of-the-establishment messaging of his dark suit and subtly patterned Republican red tie, just as his testimony undermined the no-quid-pro-quo White House story line.

And of all the images, after the hours of questions and answers, grandstanding, interpreting and debating, it is not the many dark suits with red or blue ties and the little Congressional lapel pins that are the de facto Hill uniform that remain seared into memory. (Though they were consistently, consciously, modeled by Adam Schiff, the Intelligence Committee chairman, and Mr. Nunes, as well as by David Holmes, the political counselor in the American embassy in Kyiv, and David Hale, the under secretary of state for political affairs.)

It was, rather, an actual uniform: one that was formal in its rigor, unmistakable in its messaging, and representative of a different kind of national institution.

In many ways, Lt. Col. Alexander S. Vindman’s decision to appear in his Army dress uniform, medals arrayed on his breast, buttons agleam, was simply the most obvious statement of an implicit position, one shared by most witnesses, albeit expressed in various individual ways.

It was one that stood aside from partisan politics, that prized country above self, that understood testifying as a duty — but also understood the rules of combat.

Colonel Vindman said as much to Representative Chris Stewart, Republican of Utah, who first put the uniform on the table as a topic of conversation (followed quickly by President Trump, who told reporters, “I understand now he wears his uniform when he goes in.”).

In response to a not-so-subtle attempt by Mr. Stewart to portray the choice as a ploy, Colonel Vindman said, “I’m in uniform wearing my military rank” because “the attacks that I’ve had in the press and Twitter have marginalized me as a military officer.”

It was a symbol, just as Mr. Jordan’s decision to shrug off his suit jacket was a symbol of his willingness to be the Republican Party’s attack dog.

After all, as he said in the “House Freedom Caucus” podcast in March, apropos of his tendency to tote his jacket over an arm instead of wearing it: “You get in these hearings, and if I think the witness isn’t being square with me and it’s going to get kind of heated, I mean maybe it’s just me, I just don’t feel right with the jacket on.”

The imagery taps into the cinematography of stripping down before you get in the ring; of every boxing or schoolyard tussle movie ever made. Even when he wasn’t ceded the floor, Mr. Jordan was telegraphing readiness to rumble.

Not that Colonel Vindman and Mr. Jordan were the only participants dressing for a fight. They were simply the most obvious.

While Mr. Kent’s bow tie got most of the viewing attention during his appearance, his three-piece suit was equally notable. All five buttons of the vest were tightly buttoned, even though men’s wear rules tend to dictate that the bottom button be left undone, as it is in a suit jacket.

The vest formed a kind of extra protective layer for the witness, just as the silk scarf guarding the neck of Marie L. Yovanovitch, the former ambassador to Ukraine, demanded a closer look. Reportedly a traditional design from Hermès known as the Grand Uniforme, created in 1955, it featured a pattern of gold helmets and what looked surprisingly like swords.

Elaborate, almost Napoleonic hilts, with tassels and ropes and other elements of martial pageantry. As if there were any doubt that a woman who started her testimony paying homage to her fellow diplomats in “hardship” positions, a woman of calm, carefully considered answers, did not anticipate what weapons may be deployed.

There was more: Jennifer Williams chose to appear in a hunter green coatdress with a black belt cinching the waist, almost military in line, and Fiona Hill, the former top Russia expert on the National Security Council, wore a gold chain around her neck, with a matching gold chain around one wrist. It was visible as she raised her left hand to gesture while she crisply handled questions about who knew what in the chain of command.

But given the attention paid to the moment, now and forevermore, given how much care and preparation each witness put into his or her testimony, given the way the whole case may turn on the telling detail, it seems unlikely these details, no matter how minor they seem, would be overlooked. They tell their own part of the story.