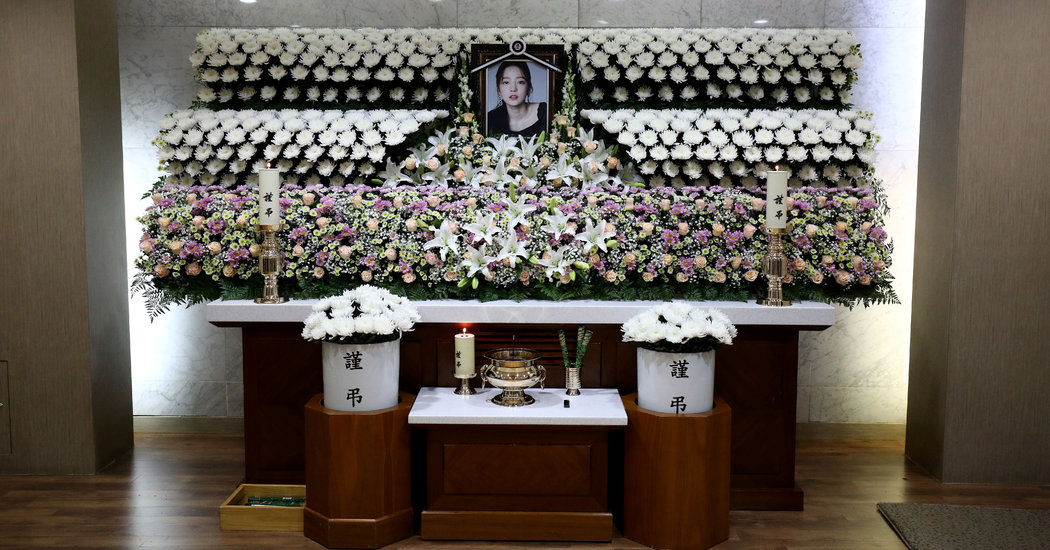 SEOUL, South Korea — When the K-pop star Sulli ended her own life last month, her fellow K-pop singer Goo Hara was heartbroken, bidding a farewell to her best friend in a live-streaming video. With tears running down her cheeks, Ms. Goo expressed hope that Sulli would live “as she pleases” in heaven.

“I will live twice more diligently now that you are gone,” she said. “Dear fans, I will be fine. Don’t worry about me.”

But on Sunday, six weeks after Sulli’s death, Ms. Goo herself was found dead in her Seoul home in what the police were calling a suicide. The suicides by two of K-pop’s most beloved stars have left fans in South Korea soul-searching over what has gone wrong in K-pop, their country’s most successful cultural export.

Lee Yong-pyo, the chief of the Seoul Metropolitan Police Agency, told reporters that Ms. Goo’s body was found by a maid on Sunday evening. Investigators also found a handwritten memo in which Ms. Goo expressed her despair, Mr. Lee said.

As grief-stricken fans flocked to the Seoul hospital where her body lay, her family was planning to hold the funeral in private.

Once popular mainly just in Asian countries, K-pop girl groups and boy bands, like BTS, now command huge global followings. The genre has captured the imagination of fans around the world with its fusion of synthesized songs, video art, fashionable outfits and synchronized dance routines that mix teasing sexuality with doe-eyed innocence.

But entertainment industry experts have long warned about the dark side of the scandal-ridden K-pop industry, which has remained largely hidden behind its glamour.

Legions of young South Koreans train for years, often starting in their early teens, honing their singing skills and dance moves in hopes of impressing “star management” agencies who deem them good enough to debut their first song. Even after they make the cut to become K-pop idols, their star status rarely lasts long, as younger stars with cuter looks and fancier dance moves replace them. K-pop stars in their late 20s are already considered old, and these fading idols often try to carve out new roles in acting or as solo singers or talk-show regulars — a difficult transition that is often not successful.

The K-pop phenomenon gets disseminated largely through YouTube, Instagram, Twitter and other social media channels, where its stars are exposed to both a flood of fan letters and hateful comments and cyberbullying on everything from their looks to their singing skills to their private lives.

“From an early age, they live a mechanical life, going through a spartan training regimen,” said Lee Hark-joon, a South Korean journalist who has produced a TV documentary on the making of a K-pop girl group and co-wrote the book “K-pop Idols: Popular Culture and the Emergence of the Korean Music Industry.” “They seldom have a chance to develop a normal school life or normal social relationships as their peers do.”

“Their fall can be as sudden and as dramatic as their rise to the height of fame,” and all at a young age, Mr. Lee added. “Theirs is a profession especially vulnerable to psychological distress — they are scrutinized on social media around the clock, and fake news about their private lives is spread instantly.”

In 2017, Sulli, a former member of the South Korean girl group f(x), attended a memorial for another K-pop star, Kim Jong-hyun, 27, who had killed himself after leaving a note that said he was consumed by depression.

Sulli, 25, took her own life last month after she bitterly complained about misogynistic internet trolls, especially after she joined a feminist campaign that advocated not wearing bras.

Ms. Goo, 28, a former member of the wildly popular K-pop girl group Kara, had also struggled with online attacks. Trolls spread rumors that she owed her looks largely to plastic surgery. She admitted that she had gone under the knife for droopy eyes.

Things turned worse for her after she broke up with her hair-designer boyfriend, Choi Jong-beom. And rumors spread that there was video footage of the couple engaging in sex.

At times, she sounded desperate, pleading for her critics to relent.

“Is there no one out there with a beautiful mind who can embrace people who suffer?” she pleaded.

“Public entertainers like myself don’t have it easy — we have our private lives more scrutinized than anyone else and we suffer the kind of pain we cannot even discuss with our family and friends,” she said. “Can you please ask yourself what kind of person you are before you post a vicious comment online?”

The situation with her ex-boyfriend, Mr. Choi, became particularly contentious. She sued him last year, accusing him of threatening to spread the footage of them having sex. In August, he was sentenced to a year and a half in prison on charges of blackmailing, coercion and inflicting bodily harm against Ms. Goo. But his jail term was suspended by the court, keeping him free.

Ms. Goo’s suicide has already resulted in soul-searching in South Korea. The number of people who supported an online petition to the office of President Moon Jae-in asking for harsher punishment for sexual harassment has more than doubled to 217,000 since her suicide was reported.

In her last Instagram message, Ms. Goo uploaded a photo of her lying on her bed. She wrote “Jalja,” or “sleep tight.”