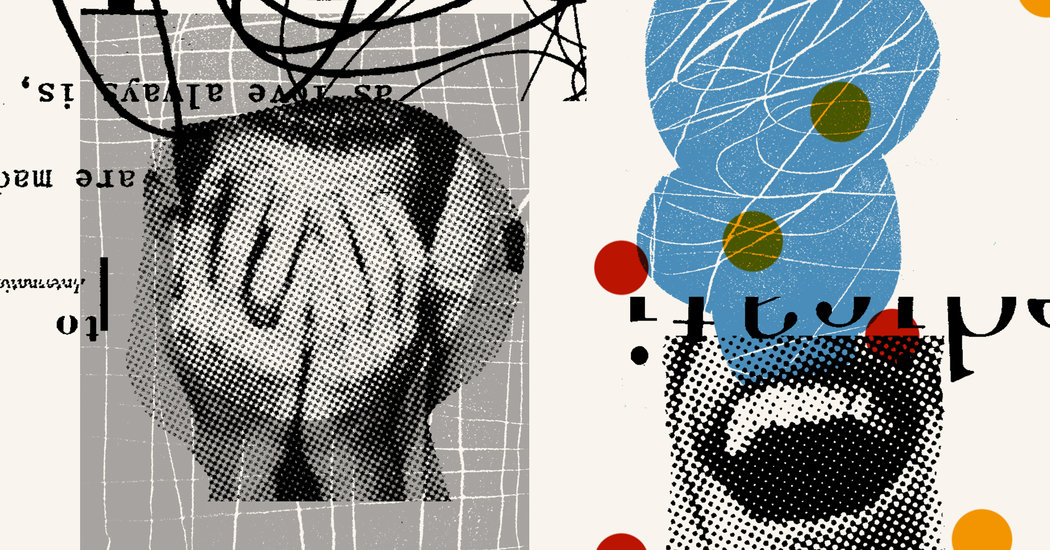 He’d been assaulted, he wrote, by “old-world mentality Agent Smiths who are threatening our ability to bring natural plant-based Medicine and intelligent health care to the world.” In caps, he told his followers to ALERT THE PRESS AND BRING SIGNS OF PROTEST.

The yogis sent positive vibes; the rebels cried fight the man; the good Samaritans offered to jump in their cars and rescue him.

Except that Roland hadn’t exactly been assaulted. He’d been placed under an involuntary psychiatric hold and forcibly subdued in an emergency room at the same institution where he was training to become a psychiatrist.

And, with that, four years ago, Facebook snitched our big family secret: Roland, the literary prodigy, the tenderhearted musician, the Ivy League grad, was bipolar.

Roland — who read and approved this essay — is the effortlessly brilliant middle child who takes up a disproportionate amount of space in a room, with a booming voice and the charisma of a megachurch pastor. After college, he moved to Hollywood and landed, with zero experience or connections, a coveted job with an A-list director. Then, he decided to become a doctor, enrolling in a top-tier M.D./M.B.A. program.

Everything about my brother is superlative, including his demons: crippling insomnia, legendary alcoholism and a chemical imbalance that has repeatedly imploded his life.

I, the firstborn, am diplomatic and obedient, less concerned with standing out than blending in. Just 17 months apart, Roland and I constantly butted heads trying to assert our individuality growing up. In seventh grade, I wrote “An Older Sister’s Guide to Having Younger Brothers,” which began: “A smart idea, which would prevent use of this guide, would be to just not have younger brothers.” Yet, when we weren’t vying for sibling dominance, we were always looking out for each other.

Roland’s bipolar disorder came of age during the same era as social media. His episodes were unpredictable in every way except for how predictably they manifested on Facebook: Between 11 p.m. and 5 a.m., he’d push out dozens of posts per hour, mostly psychedelic graphics and YouTube conspiracy videos. In his selfies, he wore cowboy boots, neon shorts and turquoise jewelry, the spirit animal version of himself. His Facebook timeline became his manic stream of consciousness, and my personal barometer for Roland’s illness.

Sometimes his posts were nonsensical and rambling. Other times, they were lucid but just as worrisome: “Planning my maiden voyage!” he captioned a photo of a sailboat he’d spontaneously purchased with what was supposed to be tuition money. Increasingly they were vicious. Once, from his UV-lit apartment, Roland went on Facebook Live, strumming Springsteen on his guitar, broadcasting untruthful claims that he’d been abused.

Back in the early days of his illness, before there was a diagnosis, I panicked with the appearance of every post. Would his friends desert him? Would everyone think our family was crazy?

Inevitably, people did ask questions. Desperate to protect Roland, my family agreed to keep answers vague: “stress,” “taking time off,” “family emergency.” We avoided labels, squirmed through euphemisms, focused on the fixable and walked on eggshells in his presence. I wanted to help Roland, but I also wanted everything to go back to normal. I didn’t know that this would become our new normal for over a decade.

Most people who suffer from bipolar disorder might have episodes that last days, or weeks. Roland, an overachiever even in mania, had episodes that lasted six months. There were hundreds of miles between us, but, during these bouts, I felt like we were in the back seat of our 1989 Honda Accord, throwing elbows at each other again. I’d reprimand him for going off his medications; he’d label me weak-minded. He’d call me 10 times in a row at work to demand money; I’d refuse. He’d threaten to cut off contact with our family; I’d use Facebook location services to track him and tattle to my parents. We’d hang up on each other, then five minutes later we’d do it all over again.

One day, Roland called me in a frenzy: “Facebook changed the algorithm! I used to get dozens of comments and likes on my posts. Now I get nothing!”

In fact, Facebook had started allowing users to control the content they see, and many people wanted to see less of Roland. Facebook is a mirror of society, after all: We showcase birthdays and babies, not unruly displays of mental illness.

But I never muted Roland. I came to need those posts, to dread the silence that followed them far more than I dreaded the mania. When he was posting, I knew he was still alive.

During his depressions, Roland would fall silent for weeks at a time, unable to get out of bed, caught in a dizzying suicide spiral. I’d hop on a flight to help my heroic parents and brother Ryan clean up the manic wreckage: vintage clothes piled high, business ventures gone wrong, strangers inhabiting Roland’s home. Every time my phone rang, I’d prepare to receive the news that Roland had killed himself.

The night my brother wrote that post from the hospital, I received a message from a friend who had been watching Roland’s Facebook activity. He was worried.

For years I’d been following a tidy routine: offer a vague non-explanation, provide light assurance that the situation was under control, congratulate the friend on his new puppy.

But that night I realized how transparent these weak cover-ups were. My family’s messy reality was out in the open, on a global platform. I couldn’t protect Roland from the public eye any more than I could protect him from his own mind.

I decided, this time, to tell the truth, in all of its complex simplicity: Roland is bipolar.

Millions of Americans have bipolar disorder, but until Roland was diagnosed, I thought I didn’t know any. Social media cracked open an important dialogue: As I shared Roland’s secrets with others, it felt as if I were sharing their secrets. Almost everyone, it seemed, had firsthand experience with mental illness: a schizophrenic cousin, a bipolar roommate, their own struggle with depression. Usually, when they revealed these things, their voices quieted to whispers. I recognized those whispers. They made me realize my family wasn’t alone.

Social media users today have become increasingly worried about breaches of their privacy, sometimes vowing to abandon the platforms. Yet I find myself strangely grateful to Facebook. It forced me out of hiding into a more honest place.

Today Roland is in recovery, having completed his M.D./M.B.A. against inconceivable odds. Sometimes it feels as if his manic episodes are in the past; other times, it feels as if they’re around the corner. He now lives just a few miles away, and we meet weekly at a cafe in Los Angeles to work on a book together about bipolar disorder. We spend those afternoons talking openly about the past decade. No one notices my voice in the clamor, but his bellowing baritone captivates curious onlookers.

I used to find his voice too big, too overwhelming. Now I want everyone to hear it.

Liz Eavey and her brother Roland Eavey are writing a memoir on bipolar disorder together.