She Sang. So Did His Heart. 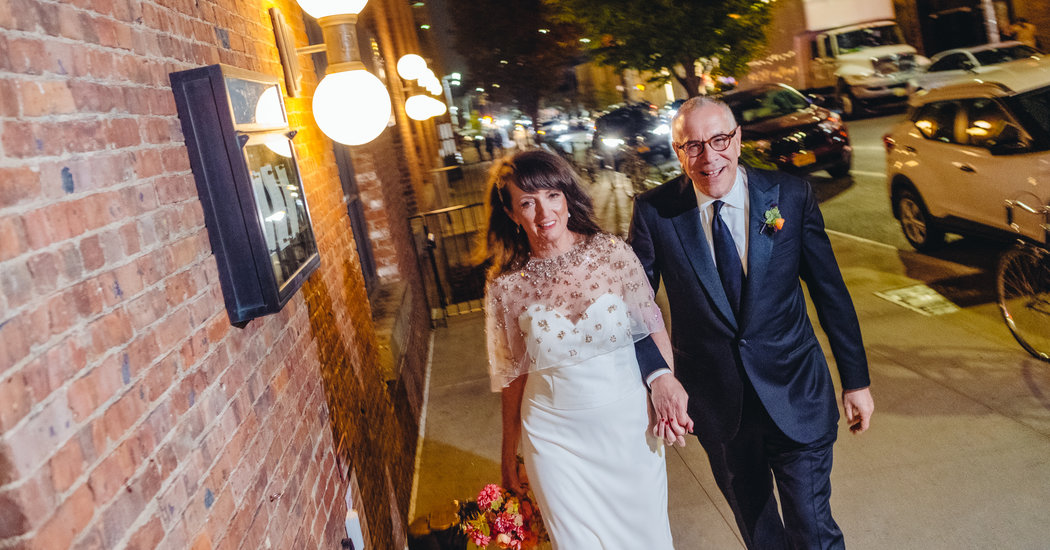 The first time Virginia McEnerney met John Schreiber she was unaware of what she calls his “big man on campus” reputation in arts circles. In fact, she admitted to him something she now finds embarrassing: She thought NJPAC — short for the New Jersey Performing Arts Center in Newark, where Mr. Schreiber is president and chief executive — was a political action committee.

What Ms. McEnerney considered a gaffe, though, meant nothing to Mr. Schreiber the night of their introduction in March 2014 at the 60th birthday party in Manhattan of a mutual friend, Robert Sherman. He was too enchanted by Ms. McEnerney to care.

Fortunately for him, she liked the first impression he made, too. Call it dapper: Mr. Schreiber, 64, wears his hair in a crew cut and is rarely seen without a coat and tie. His taste in music might be considered unlikely for a modern-day arts impresario.

“John totally skipped over the music of our generation,” said Ms. McEnerney, 62, of Park Slope, Brooklyn.

Instead of rock and pop, he favors jazz and cabaret; he won an Emmy and Tony Award for producing “Elaine Stritch at Liberty” in the early 2000s.

For Ms. McEnerney, a consultant for the Alliance for Young Artists and Writers, a New York nonprofit organization, Mr. Schreiber’s throwback style felt less stuffy than sophisticated. As the end of Mr. Sherman’s birthday party neared, Mr. Schreiber asked if he could take her to the theater some time. Ms. McEnerney, a divorced mother of two, said yes. He left with her card and high hopes that, at first, were dashed.

“I’m a very transactional person,” said Mr. Schreiber, a divorced father of three who was then living in Montclair, N.J. “When I got back to my office on Monday, I went through my calendar and found five dates I could go to the theater and emailed them off to her.”

He waited to hear back. “It was crickets. Nothing.” Mr. Schreiber settled on a course of self-preservation. “I thought to myself, O.K., your loss. I didn’t want to be rejected, so I didn’t follow up. I thought, she’s not interested, and I let it lie.”

Ms. McEnerney, who never received the email, wondered what had happened. “I just assumed I had been ghosted, even though he didn’t seem like that kind of person,” she said. A month after Mr. Schreiber sent the wayward email, Mr. Sherman connected them a second time.

Ms. McEnerney had called him, hoping he could put her in touch with Mr. Schreiber for advice. She wanted help navigating the Dodge Poetry Festival, held every other year in Newark, including sometimes at NJPAC, where she was planning a performance by the National Student Poets, a program she co-founded. With Mr. Sherman’s help, she reached Mr. Schreiber on his cellphone in April 2014. He was shopping at a bodega in Chinatown.

Over the din at the bodega, he said, “the first thing I said to her was, why didn’t you respond to my email?” When she told him she hadn’t gotten an email, his spirits lifted. He dug up a few new dates he was available, and they settled on an April 12 dinner at Market Table in Manhattan, followed by a drink at the piano bar at the Knickerbocker.

On the walk back to Mr. Schreiber’s car after the date, he took a risk. “I kissed her,” he said.

“I’ve been kissing her ever since,” he said.

Mr. Sherman, Mr. Schreiber’s best friend from Haverford College, which he attended, thought this might happen. “I’m not really the matchmaking type, but I knew the night of my party they should meet each other,” he said. “They’ve both organized their work lives around the arts, and they both have a sort of uniqueness in their approach to life.” Mr. Sherman knew Ms. McEnerney, who graduated from San Francisco State University and has a master’s degree in communications from N.Y.U., through their children.

By the time Mr. Schreiber started kissing Ms. McEnerney with some regularity, he had cause to sense he had met his soul mate. On a car trip weeks after their first date, a lull in the conversation brought out Ms. McEnerney’s playful side. “I said, ‘Shall I sing you a song?’” she asked. The song she burst into was “One Life to Live,” by Ira Gershwin and Kurt Weill.

“It’s a totally obscure song that I first heard when I was 13, sung by a cabaret singer named Portia Nelson,” Mr. Schreiber said. “Virginia knew every word. For me, that was a touchstone.”

Ms. McEnerney had latched onto the Great American songbook as a teenager and never let go. “I just thought that music was cool,” she said.

For Mr. Schreiber, equating classics with coolness was a heady aphrodisiac: “When I was 22, I would sit at the bar at the Carlyle watching Bobby Short. This is what I loved to do, and I found somebody who loved to do the same.”

Despite their shared passions, Mr. Schreiber and Ms. McEnerney entered their decision to become a couple from opposite ends of the enthusiasm spectrum.

“I signed up immediately,” Mr. Schreiber said. “I was like, more of this.”

“I was more in the moment,” Ms. McEnerney said. “I still feel that way.”

Her reluctance to move beyond the moment didn’t prevent Ms. McEnerney from saying yes to his proposal on Thanksgiving Day in 2018, with all five of their children gathered at the Newark penthouse Mr. Schreiber and Ms. McEnerney have been living in part time. He had called Ms. McEnerney’s daughters, Penelope Gehr, 26, and Violet Gehr, 22, beforehand to let them know he would be surprising their mother. He also told his sons, twins Sam and Gabe, 19, and Ben, 22.

“At dinner, I said, tell a thing you’re grateful for,” he said. He went last. “I said, ‘I’m grateful for Virginia.’ Then I got down on one knee.” With a ruby and diamond ring he bought at Frederic Goodman Jewelers in Montclair, he asked Ms. McEnerney to marry him.

A plan to propose had been in the works since 2017. “I want to spend the rest of my life adjacent to Virginia,” he said. “The best way to make that happen is marriage, I guess.”

On Oct. 25, at the Wythe Hotel in Brooklyn, Mr. Schreiber, in a dark Corneliani suit, walked down a narrow aisle preceded by his sons. About 120 guests, including the nonagenarian jazz impresario George Wein, the MacArthur Genius violinist Regina Carter and Newark Mayor Ras Baraka watched. All are friends from his long career in the arts. Ms. Carter was both guest and performer; she played her violin near an altar decorated with pink flowers.

When they were pronounced married, they had a surprise in store for their guests. Ms. McEnerney, borrowing the microphone from her sister, sang “One Life to Live.” Mr. Schreiber followed that up with a rendition of Ella Fitzgerald’s “What Is There to Say?” Both knew every word.

Where The Wythe Hotel, Brooklyn

Sealed With a Kiss Mr. Schreiber and Ms. McEnerney wrote vows for their ceremony. Ms. McEnerney’s took the form of a poem. Mr. Schreiber’s were more prosaic. When he met Ms. McEnerney, he said, “my goose was cooked. I kept waiting for you to find somebody hipper or less grouchy.”

Swinging At a cocktail hour and buffet dinner after the reception, also at the Wythe, Ms. Carter led a jazz band that included her husband, the drummer Alvester Garnett, and the saxophonist Mark Gross. The couple’s first dance was to Frank Sinatra’s “Love Is Here to Stay.”

Royal Blessings Other notable wedding guests included Murray Horwitz, the host of the radio show “The Big Broadcast,” which airs on WAMU, an NPR news station in Washington, and Dorthaan Kirk, who is known as Newark’s first lady of jazz. “I’ve never seen John look so happy,” she said.