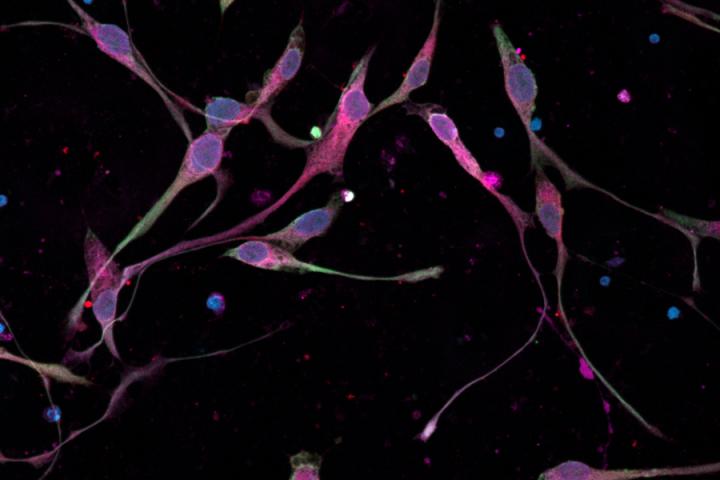 Researchers have devised a new plan of attack against a group of deadly childhood brain cancers collectively called diffuse midline gliomas (DMG), including diffuse intrinsic pontine glioma (DIPG), thalamic glioma and spinal cord glioma. Scientists at the National Institutes of Health, Stanford University, California, and Dana-Farber Cancer Institute, Boston, identified a drug pair that worked together to both kill cancer cells and counter the effects of a genetic mutation that causes the diseases.

The researchers showed that combining the two drugs – panobinostat and marizomib – was more effective than either drug by itself in killing DMG patient cells grown in the laboratory and in animal models. Their studies also uncovered a previously unrecognized vulnerability in the cancer cells that scientists may be able to exploit to develop new strategies against the cancer and related diseases. The results were published November 20 in Science Translational Medicine.

DMGs are aggressive, hard-to-treat tumors that represent the leading cause of brain cancer-related death among U.S. children. DMGs typically affect a few hundred children a year between ages 4 to 12; most children die within a year of diagnosis. Most cases of DMG are caused by a specific mutation in histone genes. Histones are protein complexes in the cell nucleus. DNA wraps around histones to form chromatin, which packages DNA in the nucleus. How DNA winds and unwinds around histones is influenced by enzymes, including histone deacetylases. These enzymes add or remove chemical tags, which indirectly controls if genes are turned on or off.

In an earlier study, Stanford neuro-oncologist Michelle Monje. M.D., Ph.D., and her colleagues showed that panobinostat, which blocks key histone deacetylase enzymes, could restore the DIPG histone function to a more normal state. While panobinostat is already in early clinical testing in DIPG patients, its usefulness may be limited because cancer cells can learn to evade its effects. So Monje’s team wanted to identify other possible drugs – and combinations of them – that could affect the cancer.

“Very few cancers can be treated by a single drug,” said Monje, a senior author of the study who treats children with DIPG and other diffuse midline gliomas. “We’ve known for a long time that we would need more than one treatment option for DIPG. The challenge is prioritizing the right ones when there are thousands of potential options. We’re hopeful that this combination will help these children.”

Monje and the National Cancer Institute’s Katherine Warren, M.D., now at Dana-Farber Cancer Institute and Boston Children’s Hospital, collaborated with Craig Thomas, Ph.D., and his colleagues at the NIH’s National Center for Advancing Translational Sciences (NCATS). Thomas and his team used NCATS’ drug screening expertise and matrix screening technology to examine drugs and drug combinations to see which ones were toxic to DIPG patient cells.

NCATS’ robotics-enabled, high-throughput screening technologies enable scientists to rapidly test thousands of different drugs and drug combinations in a variety of ways. Scientists can examine the most promising single drugs and combinations, determine the most effective doses of each drug and learn more about the possible mechanisms by which these drugs act.

The NCATS researchers first studied the effects of single approved drugs and investigative compounds on DIPG cell models grown in the laboratory from patient cells. They focused on agents that could both kill DIPG cells and cross the brain’s protective blood-brain barrier, a necessity for a drug to be effective against DIPG in patients. The team then tested the most effective single agents in various combinations.

While there were multiple, promising outcomes from these screens, the team focused on the combination of histone deacetylase inhibitors (like panobinostat) with drugs called proteasome inhibitors (such as marizomib). Proteasome inhibitors block cells’ normal protein recycling processes. The panobinostat-marizomib combination was highly toxic to DIPG cells in several models, including DIPG tumor cell cultures that represented the main genetic subtypes of the disease and mice with cells transplanted from patient tumors. The combination also reduced tumor size in mice and increased their survival. A similar response was found in spinal cord and thalamic DMG models developed from cells grown in culture from patient cells.

The screening studies also provided important clues to the ways the drugs were working. Building on these data, the collaborative team subsequently conducted a series of experiments that showed the DIPG cells responded to these drugs by turning off a biochemical process in the cell’s mitochondria that is partly responsible for creating ATP, which provides energy to cells. The drug combination essentially shuts down tumor cell ATP production.

“The panobinostat-marizomib drug combination exposed an unknown metabolic vulnerability in DIPG cells,” said first author Grant Lin, Ph.D., at Stanford University School of Medicine. “We didn’t expect to find this, and it represents an exciting new avenue to explore in the development of future treatment strategies for diffuse midline gliomas.”

Plans are underway for clinical trials of the drug combination and of marizomib alone.

“Many drugs that we test have multiple effects on DIPG cells,” said Warren, a senior study author. “Panobinostat, for example, inhibits a specific enzyme, but it has other mechanisms working in tumor cells that may contribute to its effectiveness. We’re still trying to understand the various Achilles heels in these cancer cells. This work is an important step in translating our preclinical data into patients.”

Monje stressed the panobinostat-marizomib combination might be an important component of a multitherapy strategy, including approaches that harness the immune system and those that disrupt factors in the tumor microenvironment that the glioma cells depend on to grow. Like Warren, Monje emphasized the need to better understand how drugs target and impact the DIPG cells’ vulnerabilities.

“Our work with NCATS showed the need to gather more preclinical data in a systematic, high-throughput way to understand and prioritize the strategies and agents to combine,” Monje said. “Otherwise we’re testing things one or two drugs at a time and designing clinical trials without preclinical data based on hypothesized mechanisms of action. We want to move past this guesswork and provide preclinical evidence to guide clinical decisions and research directions.”

Lin added, “The idea is to get as many effective tools as possible to work with that can have an impact on patients.”

About the National Center for Advancing Translational Sciences (NCATS): NCATS conducts and supports research on the science and operation of translation — the process by which interventions to improve health are developed and implemented — to allow more treatments to get to more patients more quickly. For more information about how NCATS is improving health through smarter science, visit https://ncats.nih.gov.

About the National Institutes of Health (NIH): NIH, the nation’s medical research agency, includes 27 Institutes and Centers and is a component of the U.S. Department of Health and Human Services. NIH is the primary federal agency conducting and supporting basic, clinical, and translational medical research, and is investigating the causes, treatments, and cures for both common and rare diseases. For more information about NIH and its programs, visit //www.nih.gov.
NIH…Turning Discovery Into Health®