Scientists Created Fake Rhino Horn. But Should We Use It? 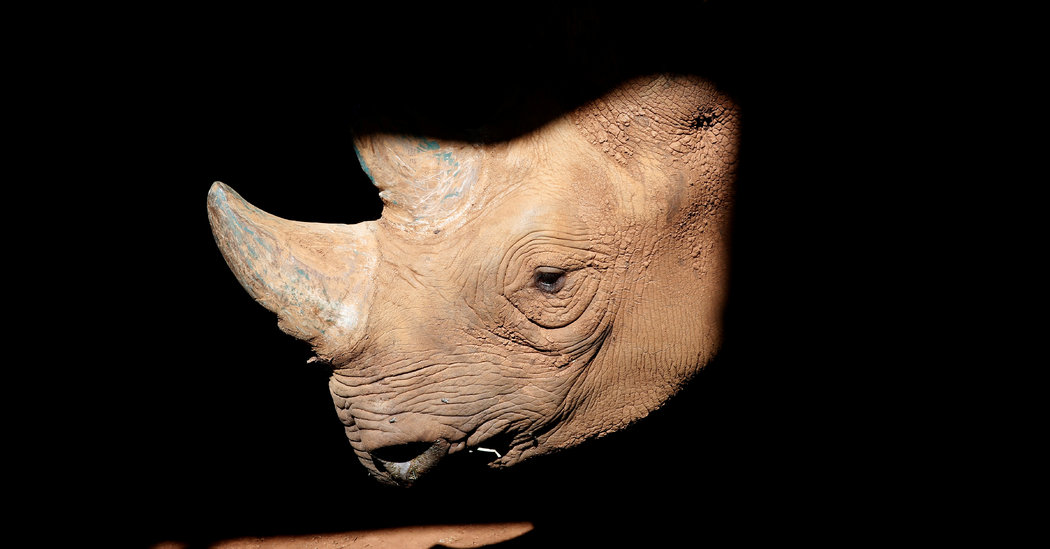 In Africa, 892 rhinos were poached for their horns in 2018, down from a high of 1,349 killed in 2015. The decline in deaths is encouraging, but conservationists agree that poaching still poses a dire threat to Africa’s rhino population, which hovers around 24,500 animals.

Now, in the hopes of driving down the value of rhino horn and reducing poaching even more, scientists have created a convincing artificial rhino horn made from horsehair.

“We’re not trying to supplant boots-on-the-ground, vigilant customs officials and protection of rhino habitat,” said Fritz Vollrath, a biologist at the University of Oxford and senior author of the study, published in Scientific Reports. “But these measures alone so far have not been sufficient to save the rhino, so what we’re doing here is bringing out a really good fake.”

The product that Dr. Vollrath and colleagues at Fudan University in China have produced looks identical to rhino horn under a microscope. It has a similar chemical signature and behaves like rhino horn when cut or shaved. It even smells the same when burned.

With such properties, Dr. Vollrath believes his artificial horn could be used to covertly flood the market with a cheap, convincing replacement, reducing the demand that leads to rhinos being slaughtered. He also hopes it might provide an educational tool for “demystifying that rhino horn’s something very special,” he said.

A number of experts pushed back, however, saying such a product is unnecessary and even dangerous.

Some wealthy elites in China and Vietnam continue to give rhino horn as gifts and, in Vietnam, bring it to parties as a hangover preventive. In China, it’s also carved into jewelry and ornate cups, and collected for speculation purposes.

“What we’ve seen is that most rhino horn is now being used for status symbols,” said Olivia Swaak-Goldman, executive director of the Wildlife Justice Commission, a nonprofit organization that investigates wildlife trafficking networks.

Status depends on rhino horn’s exclusivity, high price and rarity — things that Dr. Vollrath believes his artificial horn could undermine. “We are giving back street entrepreneurs the recipe for how to make fake rhino horns, so hopefully people will get it into the market,” he said.

Rhino horn, as Dr. Vollrath puts it, is “nothing but a tuft of nose hair stuck together with glue that comes out of the animal’s nose glands.” He and his colleagues chose horsehair as a basis for their fake rhino horn because horses are a close relative of rhinos. They cleaned and tightly bundled the hair, then bound it together with a mixture of liquefied silk, which stood in for the collagen found in rhino horn, as well as cellulose, which represented the plant material that gets rubbed in as rhinos sharpen their horns.

Pembient, a Seattle-based bioengineering company launched in 2015, is already exploring the development of 3D-printed rhino horn. Matthew Markus, Pembient’s chief executive officer, said he would be open to testing the new horsehair formula. “Their organic matrix is a neat innovation and definitely brings horsehair horn closer to being a good substitute for rhino horn,” he said.

But his company has also faced pushback from conservationists.

Critics say that fake rhino horn risks stimulating demand for real horn, and that it would complicate policing. “There’s already scarce resources for wildlife crime and we don’t want to make it even more difficult for law enforcement,” said Ms. Swaak-Goldman, who works with governments and law enforcement agencies.

Peter Knights, chief executive officer of WildAid, a nonprofit organization dedicated to ending illegal wildlife trade, added that the market in Vietnam is already flooded with convincing fakes, like water buffalo horn, which accounts for up to 90 percent of what’s sold as rhino horn. “It’s widely known that there is a lot of fake product out there, so this experiment is already running,” Mr. Knights said.

Frederick Chen, an economist at Wake Forest University, said that there is more than one way to flood a market, however. “Conservation groups tend to clump different strategies under one roof and have a knee-jerk reaction that they have to reject them all,” he said. “But the dangers they point out don’t apply to all strategies.”

Dr. Chen agreed that introducing a product marketed as an artificial alternative would risk driving up demand for real rhino horn. But covertly introducing a product that passes as real rhino horn but later reveals itself to have some undesirable defect — horns that deteriorate after purchase, for example, or horns that, when consumed, trigger a stomach ache — could ultimately undermine demand. “If you introduce quality uncertainty into the market, you are trying to create confusion and essentially destroy the rhino horn market,” he said.

For now, these ideas remain in the realm of theory — and much of that theory goes against real-world evidence suggesting what might happen if the market was flooded with fake horn, said Solomon Hsiang, an economist at the University of California, Berkeley. Dr. Hsiang cautioned, for example, that experiments trying to undermine black markets in elephant ivory by selling legal ivory backfired and ultimately lead to increased poaching.

Engineering fake rhino horn “seems like an elaborate technological approach that is not without potentially serious risk,” Dr. Hsiang said, when a much simpler strategy would be to focus on targeted demand reduction.

According to Lynn Johnson, founder of Nature Needs More, a nonprofit organization that aims to reduce wildlife demand and supply, demand reduction campaigns should focus on top rhino horn users, who are usually wealthy, elite men.

Dr. Johnson interviewed 20 such individuals in Vietnam and found that they do not fall for fakes: They take measures to ensure their purchase is genuine, including working with a trusted supply chain and requesting the rhino’s tail as proof of provenance.

They also told her that they view rhino horn as a luxury product that confers prestige. A 2018 study involving 30 Vietnamese rhino horn buyers found that most no longer believed it could cure cancer — a newfangled use that became popular around a decade ago — but they still sought it out as a symbolic final gesture to comfort terminally ill relatives.

Belief in rhino horn’s traditional medical properties also seems to be on the decline. A survey of 400 people in Vietnam carried out by WildAid in 2016 revealed that 23 percent thought rhino horn had medicinal value — down from 69 percent in 2014.

But so long as influential people continue to hold rhino horn in high regard, Dr. Johnson says that younger and less successful people will also continue to see it as something desirable. “As soon as people can afford the real thing, they’ll buy it,” she said.

Changing the minds of top users — something Dr. Johnson and her colleagues are trying to do — is therefore key to quashing demand, she said.

“I’m a scientist, but you have to know when science won’t help,” she said. “Calls for fake rhino horn just shows that there’s a lack of understanding about the true commercial nature and consumer desire of current demand.”