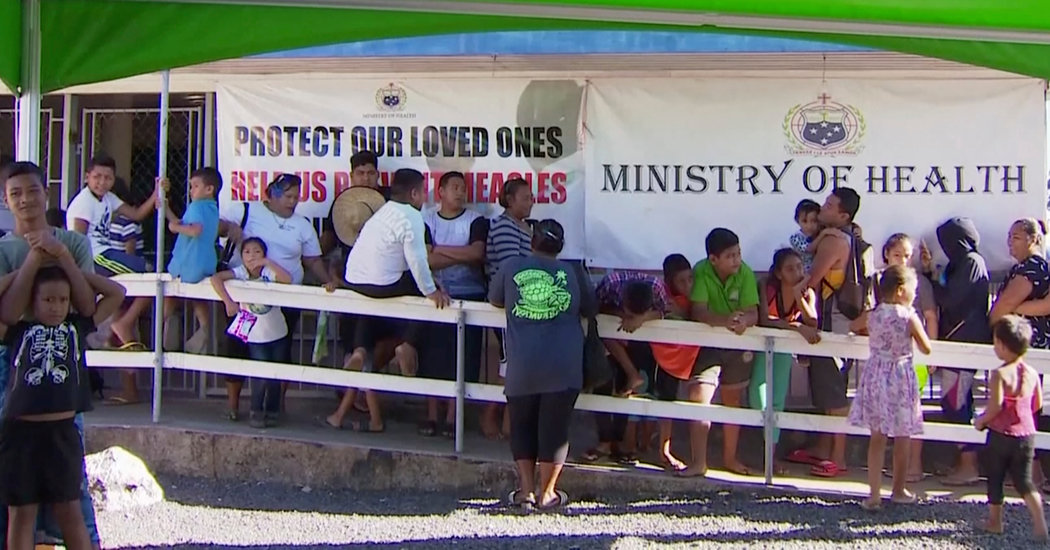 Schools in the Pacific island nation of Samoa were closed indefinitely on Monday and children have been barred from public gatherings amid a measles epidemic that has killed at least six people, most of them younger than age 2.

As Samoa, a country of about 200,000 people that is part of the same island chain as American Samoa, declared an emergency last week, health officials said they were “anticipating the worst to come.”

At least 716 potential cases of measles have been recorded, and almost 100 people have been hospitalized. Among those killed were three siblings from one family, according to the New Zealand broadcast channel 1News.

But the number of cases and deaths is most likely higher, experts said, calling the Samoan government’s response to the epidemic delayed.

“It’s as bad as you’re seeing and probably worse,” said Dr. Helen Petousis-Harris, a vaccinologist at the University of Auckland in New Zealand. “This is very much out of control.”

Government officials did not respond immediately to requests for comment.

The epidemic has come as the immunization rate against measles has plummeted in Samoa in the years since a medical mistake led to the deaths of two infants and spurred widespread mistrust of vaccinations. In those cases, nurses mistakenly administered a vaccine mixed with an anaesthetic.

The immunization rate dropped to as low as 30 percent last year from about 60 percent in 2016, according to figures from the World Health Organization. By contrast, in Fiji, Tonga and American Samoa, where outbreaks have also been reported, about 90 percent of children have been immunized.

On Friday, the Samoan government declared that measles vaccinations would be mandatory, and that children under 17 barred from public gatherings and medical facilities unless sick. The National University of Samoa said that it had closed its campuses and would delay scheduled exams until further notice.

There has been a global resurgence of measles in the last several years, and in August the World Health Organization said that the number of cases had almost tripled in a year. Officials have attributed the increase in part to poverty that has left many countries unable to vaccinate with sufficient regularity.

A number of the measles cases in Samoa have been linked to New Zealand, the country’s former colonial power, which has been struggling with its own outbreak, Dr. Petousis-Harris said. Winston Peters, the New Zealand foreign affairs minister, said on Monday that his country would send 18 more vaccination nurses, for a total of 30, along with 3,000 units of the vaccine, to help contain the epidemic in the coming month.

Australia has also sent medical aid at the request of Samoan officials, according to the country’s health department. The Australians have sent 26 medical practitioners with urgent supplies and a portable intensive care unit.

Other Pacific governments have also acted. American Samoa declared a health emergency last week and said that travelers to American Samoa from Samoa must now provide proof of measles vaccination.