Rethinking Tiny Tim: Should a Disabled Actor Play the Role? 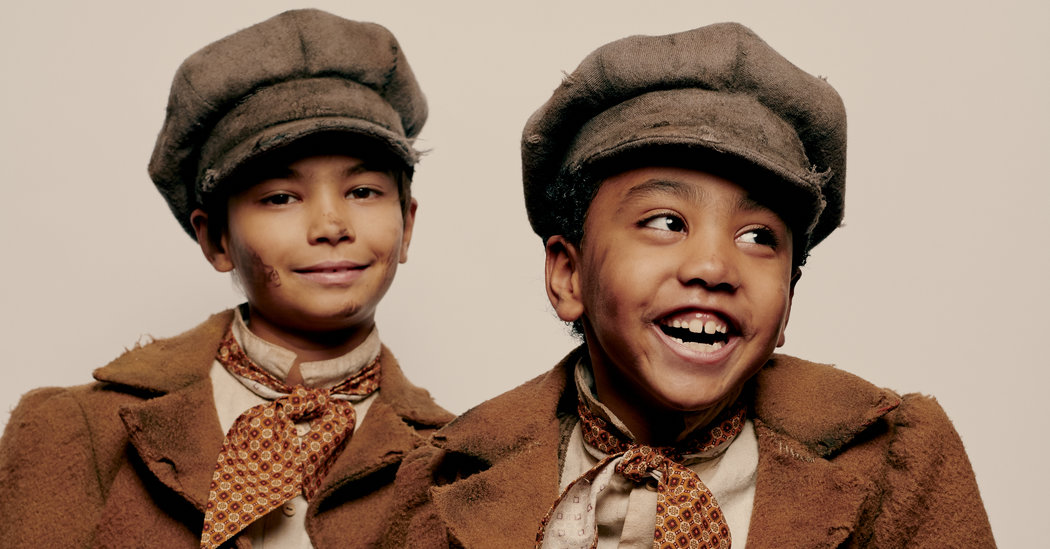 Sebastian Ortiz, 7, a first grader now making his Broadway debut in “A Christmas Carol,” scrunched up his face as he paused to think about what it means to be playing Tiny Tim onstage. “Always be brave,” he said.

“Always look on the bright side,” suggested Jai Ram Srinivasan, 8, a third grader sharing the role.

The two boys share a combination of bashfulness and optimism as they embark on an adventure unlike anything either has attempted before.

They share a dressing room, with coloring books and board games and a superhero corner tricked out with a Marvel Comics-themed mat and pillows.

And they share a diagnosis: both of them have cerebral palsy.

Charles Dickens introduced young Tim Cratchit to the world 176 years ago, and ever since the character has been a symbol of “A Christmas Carol” — the sickly but sanguine child whose plight helps transform Ebenezer Scrooge.

But now, in an era in which authenticity and representation have become entertainment industry watchwords, the presenters of some of the many theatrical adaptations that are staged every winter are rethinking who gets to play this iconic role, and often concluding that it should be a child with a disability.

In Illinois, Paris Strickland, an 11-year-old girl whose spine was compressed by cancer during childhood, will play Tiny Tim for the third year in a row at Chicago’s Goodman Theater. (Yes, at many theaters girls play the role.)

“Paris knows that life can be fragile, she knows what a difference strength of character and hope and relying on loved ones can make in a person’s life,” said the Goodman production’s director, Henry Wishcamper. “I think that comes out clearly onstage.”

“It brought a dimension of honesty and truth to the show,” said the director, Mike Mazur.

And now, Broadway. A new adaptation of “A Christmas Carol,” starring Campbell Scott and opening Nov. 20, cast Sebastian and Jai to alternate in the role.

“One of my bugbears with ‘Christmas Carol’ is when Tiny Tim is not played by a disabled person, because he’s supposed to be a disabled character,” said Jack Thorne, the Tony Award-winning playwright (“Harry Potter and the Cursed Child”) who wrote the new adaptation for the Old Vic Theater in London, where it has been running each holiday season since 2017.

Thorne, who for years struggled with the debilitating effects of chronic cholinergic urticaria, a skin ailment, has worked with a theater company championing the disabled, and insisted on casting disabled children in the role of Tiny Tim. “When there’s a shortage of parts for people with disabilities,” he said, “it’s really important we have disabled people play disabled parts.”

So in London, the casting call for the role made it clear: “Applicants without a disability will not be considered.” In New York, the language was subtler: “Performers with disabilities are encouraged to audition.”

The show’s New York casting director, Jillian Cimini, said she and her team had found Sebastian, Jai, and other candidates by reaching out to a variety of agents and programs who work with the disabled.

Sebastian, who lives in Manhattan, was referred by Dancing Dreams, a New York nonprofit that offers dance classes for children with medical or physical challenges. Jai, who lives in Virginia, learned about the opportunity by word of mouth; he has modeled clothing for people with disabilities from Tommy Hilfiger and Kohl’s.

Their casting comes at a time of increasing visibility for disabled performers onstage. This year, Ali Stroker became the first performer who uses a wheelchair to win a Tony Award, for her work as Ado Annie in a revival of “Oklahoma!” Last year, “Cost of Living,” a play by Martyna Majok about people with disabilities, won the Pulitzer Prize in drama.

Over the three seasons in London, Tiny Tim has been played by boys and girls with dwarfism, cardiomyopathy, cerebral palsy, and ataxia, as well as other issues affecting their limbs (twisted tibias, a missing arm) and eyesight.

“With some of our Tims it’s very visible, and with others it’s not, but I think audiences can smell authenticity, and they can feel it,” Thorne said.

At the 116-year-old Lyceum Theater, where the Broadway production is now in previews, Sebastian and Jai share the dressing room closest to the stage, and ramps have been installed into both wings and the performance area.

Both of them say they do not see their conditions as limitations.

“I just fight through it, and try to be the best I can,” said Jai, whose left-side weakness means he walks with a limp and who wears an arm brace to stabilize his wrist.

“It doesn’t affect me at all,” said Sebastian, who wears orthotics on both legs and uses a posterior walker to get around.

For the children who have already played the role in other productions, the significance is obvious.

“It was really cool, because he has a disease like me, and it was kind of relatable,” said Jonathan, who played the role in Texas.

And Paris, whose family was told she had neuroblastoma when she was just nine days old, said she too feels a kinship with Tiny Tim, whom she plays in Chicago. “We both have difficulties walking, but we’re still happy all the time.”

For their parents, the opportunities stir a mix of emotions. In one of Scrooge’s visions, he sees a future in which Tiny Tim has died. Jonathan’s mother, Tiffany Rizzo, noting that her child’s prognosis is uncertain, said that scene “was really hard to watch — it does hit close to home.” But, she said, “For Tiny Tim there’s hope,” she said, “and we have hope for Jonathan.”

Matthew Warchus, a Tony winner (for “God of Carnage”) who directed the London and New York productions of Thorne’s “A Christmas Carol,” said he is mindful of how the young performers are seen. “The admiration mustn’t be condescending,” he said.

But he said the message to the audience is important: “It opens our eyes and our imaginations to all the different versions of human beings that surround us, and that’s a good thing.” (Warchus is also protective of the child actors: he refused to let them be photographed playing the role, which they do in alternate performances, saying in a statement: “It would be unrepresentative and unfair if an image of just one of them were to be published.”)

Tiny Tim has long been a character of concern for disability advocates, in part because of his high visibility. Dickens describes the child’s condition with pity: “Alas for Tiny Tim, he bore a little crutch, and had his limbs supported by an iron frame!” He is best known for his benediction, “God bless us, every one!” which continues to prompt tears.

“Other characters fall by the wayside and contemporary ideas take over, but this story is so persistent,” said Julia Miele Rodas, a disability studies scholar and Victorianist at Bronx Community College. She said many advocates dislike the symbolism of disability represented by a helpless child. But she said Tim can also be seen “as kind of subversive, because he’s the one who empowers the change in Scrooge.”

Scrooge, of course, starts the story as a miserly grouch, and ends it charitably. In some stage adaptations, Tiny Tim is healed by Scrooge’s generosity — he no longer limps or uses a crutch — a resolution that advocates for the disabled say is unrealistic and problematic.

The Louisville theater has not yet cast a child with a disability as Tiny Tim, but, arguing that disabled characters should be able to play any role, has this year invited Patrick Taylor, a 30-year-old actor with Tourette’s syndrome, to play a young Scrooge.

And the Louisville theater, like others concerned about how disability is treated in the show, has modified the ending — in their production, McRae said, Tim’s surroundings will improve thanks to Scrooge’s generosity, but Tim “will keep his crutch and his limp.”

At the close of the Chicago production, Tim no longer needs a crutch, but continues to limp, and is able to join in some but not all of the activities with other children.

“Part of the story we’re able to tell is that Tim is in a much better place, but he’s not miraculously healed,” Wishcamper said. “It’s not a movie-of-the-week ending for him.”

In the Broadway production, the child’s disability does not change; the focus is on Scrooge’s transformation and Tim’s empowerment. “Scrooge is forgiven by a child,” Warchus said. “That’s the arc.”