‘Public Option’ Draws Voters Unsure About ‘Medicare for All’ 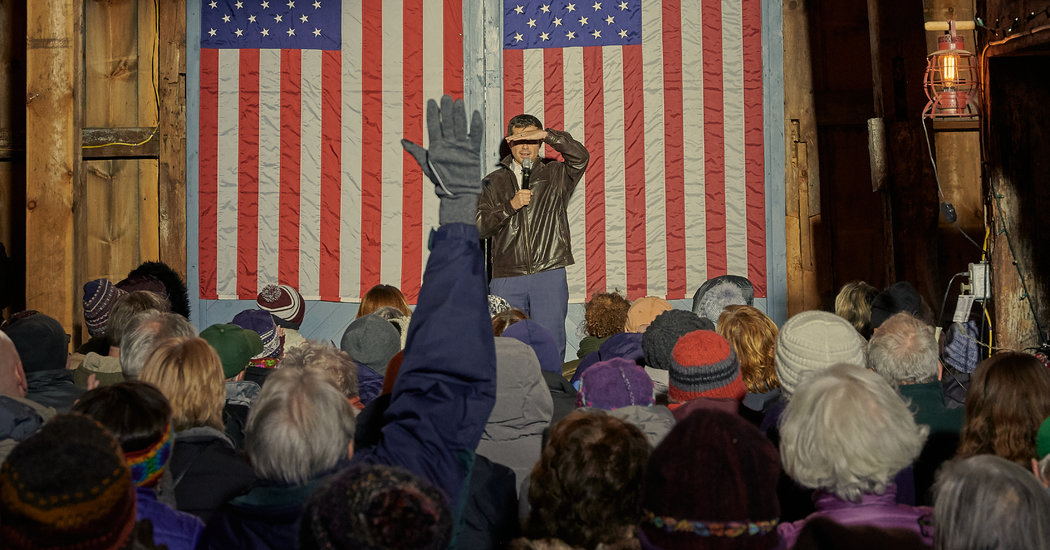 CONCORD, N.H. — One after another, voters at a recent campaign event here for former Vice President Joseph R. Biden Jr. expressed utter comfort with the centerpiece of his health care platform: an idea once so controversial that Democrats had to drop it from the Affordable Care Act to get the landmark law passed.

The proposal would allow people of all incomes who aren’t old enough for Medicare to choose health coverage through a new government-run plan that would compete with private insurance, known by the less-than-catchy shorthand “public option.”

A decade ago, the issue created such deep internal divisions among Senate Democrats that they ultimately dropped the idea from their bill, even though the public option was strongly favored by many liberals and a majority of House Democrats, including Speaker Nancy Pelosi.

But now, with two of the leading Democratic presidential candidates, Senators Elizabeth Warren and Bernie Sanders, calling for a government-controlled single-payer “Medicare for all” system as they compete for support of the party’s liberal wing, a public option is looking like a safe moderate position and even a realistic policy goal.

Not only are most of the other Democratic presidential candidates proposing some version of it, but Ms. Warren, facing trepidation over her $20 trillion single-payer plan, now says she would start her presidency by pushing for a public option and would wait until her third year in office to seek “Medicare for all.”

During the Democratic candidates’ debate on Wednesday, as Mr. Biden and Mayor Pete Buttigieg of South Bend, Ind., warned again that “Medicare for all” would mean taking away the choice of private insurance, Ms. Warren said her intent was to create a public option first to “get as much help to the American people as we can as fast as we can.”

About two-thirds of voters like the idea of a public option or Medicare buy-in, according to several recent national polls. This month, the Kaiser Family Foundation tracking poll, which has asked voters about the plan four times since July, found that 65 percent of the public favors the idea, compared with 53 percent who support “Medicare for all.” Large majorities of Democrats and independents favored a public option in Kaiser’s November poll, as did 41 percent of Republicans — roughly the same level as earlier Kaiser polls found but down from an unusual spike of 58 percent in October.

“I think our goal should be to try to get everybody in America to have health insurance, and I think the easiest and fastest way is what Vice President Biden is proposing — to have the public option.” said Dr. Alexandra Argasinski, 56, an internist who buttonholed Mr. Biden about his plan here in Concord after he served chili with firefighters.

Polls suggest that some voters have become unnerved by the price tags of the Warren and Sanders’ “Medicare for all” plans and the fact that they would abolish private health insurance. Support for such an approach has narrowed in recent months, as people have begun to understand what it would involve. A new Kaiser Family Foundation poll of voters in four battleground states — Michigan, Minnesota, Pennsylvania and Wisconsin — found that 62 percent of those who are undecided or are still persuadable believe that “a national Medicare-for-all plan that would eliminate private health insurance” is a bad idea.

Nancy Downing, 42, a receptionist from Concord, said she admired Ms. Warren and Mr. Sanders for wanting to achieve free government health care for all. But she said Mr. Biden and Senator Amy Klobuchar of Minnesota, who has also proposed a public option, are more appealing to her because they are more realistic about long-term spending.

“They’re great ideals,” Ms. Downing said of the Warren and Sanders’ “Medicare for all” plans, “but I’m just not sure we can pay for it.”

The public option plans offered by Mr. Biden and Mr. Buttigieg would require much less federal spending than Ms. Warren’s $20.5 trillion proposal to provide generous health benefits, at no cost, to all Americans. Mr. Biden has estimated his plan would cost $750 billion over 10 years; Mr. Buttigieg has said his version, which he likes to call “Medicare for all who want it,” would cost $1.5 trillion.

Mr. Biden and Mr. Buttigieg’s plans would automatically enroll uninsured Americans in the new government health plan and allow anyone else to opt in if they wished. Both candidates would offer more generous premium subsidies than the Affordable Care Act provides and cap people’s premium costs at 8.5 percent of their income. People with premium subsidies would have deductibles of roughly $1,000 or less. Mr. Buttigieg’s plan would go a step further, retroactively enrolling anyone who had remained uninsured but ended up sick.

Although most of the other Democrats who qualified for Wednesday’s debate support the idea of a public option, few have released detailed proposals. Some candidates, like Senator Cory Booker of New Jersey and Andrew Yang, an entrepreneur, say they hope a public option would lead to “Medicare for all;” others, like Ms. Klobuchar and Tom Steyer, a former hedge fund investor and a billionaire, consider it an end in itself.

The public option that Ms. Warren has proposed as a bridge to her “Medicare for all” plan would go further. It would be free for all children and for households with incomes at or below 200 percent of the federal poverty level, which is currently about $51,000 for a family of four. For people who earn more, premiums would be capped at 5 percent of income; there would be no deductibles and “modest” out-of-pocket costs. Ms. Warren has not said how much this public option plan would cost the government, but it would be considerably less than “Medicare for all;” during Wednesday’s debate she said it would cover 135 million people — about 40 percent of the population — for free.

If Ms. Warren was hoping for a second look from Democrats alarmed by her single-payer plan, she found one in Betsy Loughran, 79, of Tamworth, N.H. Ms. Loughran, who used to run a nonprofit social services agency, said she found Ms. Warren’s proposal for an interim public option “much more palatable, frankly” — so much so that she would now consider donating to her campaign.

“It would be no slam dunk even to get a public option through Congress,” said Ms. Loughran, adding that Ms. Warren’s full-throated support of “Medicare for all” had made her more interested in centrist candidates like Mr. Buttigieg and Ms. Klobuchar. “But if Elizabeth backs off and has a transition plan that would allow people to keep their private health insurance, that makes much more sense.”

The difference between Mr. Biden and Mr. Buttigieg on health care is largely one of tone: Mr. Biden focuses on preserving and improving the Affordable Care Act; Mr. Buttigieg emphasizes that a public option would provide “a glide path” to single-payer by gradually siphoning — though never forcing — customers away from private insurance companies through lower costs.

“I fundamentally believe there’s no going back,” Mr. Buttigieg said on his campaign bus last week.

Mr. Biden, during a town hall in New London, did look back. He reminisced about the birth of the Affordable Care Act, saying, “I was there when we passed that, broke my neck getting it passed.”

Now, he added, it was time to “make it Bidencare by passing a public option.”

Beyond the questions about how the public option would work are bigger political questions about getting such a measure through Congress, even if it does have broad bipartisan support from voters.

As voter support for a public option has strengthened, industry opposition remains fierce. A group of doctors, nurses, community hospitals and insurers called the Partnership for America’s Health Care Future warns that a public option could bankrupt rural hospitals, whose financial health is already poor, and could raise premiums for some.

Recent state-level efforts to adopt a public option also suggest the industry resistance could be formidable. In Washington State, where Gov. Jay Inslee signed into law the nation’s first public option in May, he and other supporters had to make big compromises to get it passed, abandoning the idea of the plan paying Medicare rates — considerably less than what private insurance pays — and letting private insurers run the new plan instead of the government.

Similarly, an ambitious public option bill in Connecticut died in June after the state’s insurance industry revolted. The state official leading the charge for the public option told The Hartford Courant that the chief executive of Cigna had warned that the company would leave the state if it was enacted.

On his campaign bus in Concord, N.H., the other day, Mr. Buttigieg said he believed public pressure would force such a measure through Congress.

He added, “I think it’s going to be really hard for members of Congress to stare down their constituents and say no.”

“I would like for everybody to be able to make that choice,” Mr. Dadekian said. “The union workers have worked really hard to get something better than the federal government is realistically able to offer; they should be able to keep the insurance they have.”

At a barn party for Mr. Buttigieg, Dave and Mary Ingalls, a retired couple from Methuen, Mass., said they wanted more people to have access to health care, but not at the expense of the type of private insurance they enjoyed over the span of their careers.

“That’s one of the reasons I’m standing in this barn seeing my breath,” said Mr. Ingalls, 71. “I think that’s un-American. America is about choice — not, oh, suddenly we have a gigantic new bureaucracy that may or may not work.”