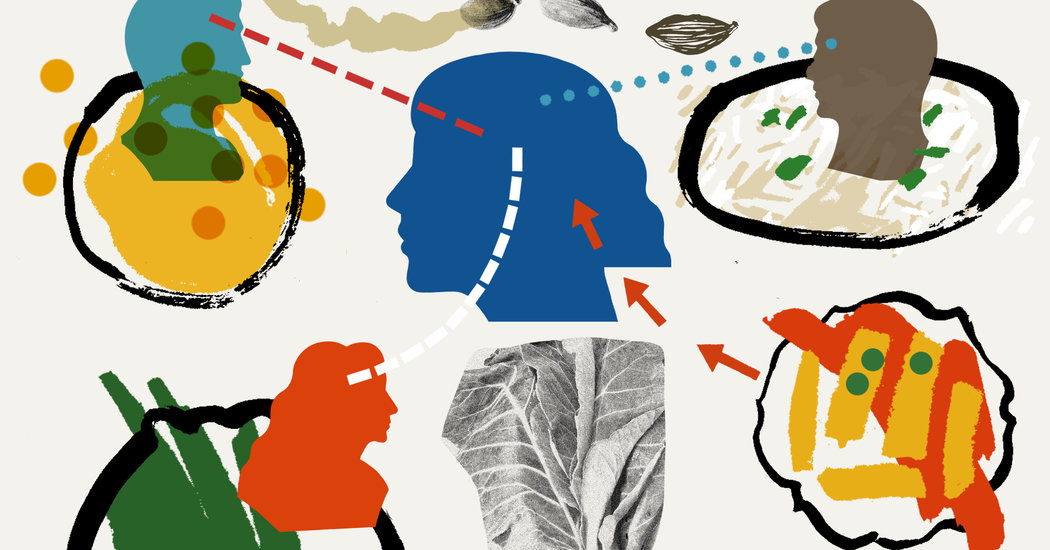 I grew up an immigrant child, spending my formative years in three countries, England, Pakistan and Saudi Arabia. In a time before keeping in touch was an internet call away, I’d have to say goodbye forever to bedrooms, to classrooms, to friends. I learned to rely for continuity on two constant companions: books and food.

On nights when I’d cry for the homes we’d left behind, my mother consoled me by preparing meals I’d eaten with friends — chicken tikkas dyed so red they rivaled the fiery lipsticks of girls playing with makeup, drumsticks coated with grains of pepper so large they shone like stick-on black diamonds on homemade tiaras — and so while those friends weren’t there, they were there.

When I moved from Pakistan to America for college and got married straight after graduation, I carried my mother’s recipes with me. Except they were more than recipes, they were memories forever bursting on my tongue. Now friends from back home graced my table though cardamom-infused chais and cheese-toast, each morsel an ode to remembrance.

When my grandfather died and I was unable to fly to Pakistan for his funeral, I conjured him up by eating my keema-chawal the way he’d eat his, by dousing the red minced meat spiced with hot peppers and white rice in warm whole milk. When I missed my father, I made a masoor ki dal and, as he did, I finger-shredded chapatis into the yellow lentils garnished with deep fried onions. As for my mother, she is always the Kashmiri staple of batha-haak, in her case mustard greens glistening atop a hill of steaming white rice. When I moved to a suburb of Atlanta, the mustard greens were replaced by collard greens, which is how my mother’s Kashmiri cooking became Southern or a Southern staple became Kashmiri.

“Food is the connective tissue between space, time, cultures and death,” my mother said.

She would know. As a child, her parents fled India for Pakistan in the 1947 Partition, and, once she got married, she’d move again from Pakistan to England and from there to Saudi Arabia. She was an immigrant hungry for connections who gradually settled upon cooking as her way out of homesickness. Even though my mother is an anesthesiologist and I’ve seen her plenty of times in her scrubs, for me she is also the person in our kitchen preparing relationships from scratch over and over again.

When my husband, our young children and I moved to the Atlanta suburbs in 2005, we didn’t know anyone. In between feeding our children their beloved store-bought dinosaur-shaped chicken nuggets, we feasted on my memories of tables full of laughter. While I did not cook back home in Pakistan, my American kitchens taught me to cook and I wanted to nourish my kids with the cuisine I’d grown up on, as well as the new foods they were eating at school and demanding at home.

“Do not be scared to experiment,” my mother urged. “Sprinkle the macaroni and cheese with sautéed onions. Serve the tater tots with date-tamarind chutney. Prepare the batter for the popcorn shrimp with spicy chickpea flour so it becomes a popcorn shrimp pakora.”

As most immigrants can attest, distance plus a yearning for home cooking grows a newfound umbilical cord between parent and the adult child. Daily I called my mother for precise ingredients and meticulous instructions.

“What do you mean salt to taste?”

“Are you sure green coriander and ground coriander are not the same thing?”

“Can you repeat the steps all over again?”

Gradually I learned that like my mother, I too am a whatever-is-in-the-fridge-throw-in-the-pot-kind-of-cook and I too would eventually learn to cook for a multitude of guests at even a moment’s notice. I too rely on a sixth sense for spices to know which ingredients will go together and a certain aroma to know when a dish is done. I am my mother’s daughter: Some turn to yoga and music to relax; I chop onions, julienne carrots and cube bell peppers. A kitchen to me is the comfort and care of a mother’s arms.

Two years after moving to Georgia, I had a miscarriage at 16 weeks. I could not even stand to be in the kitchen. Knives reminded me of breakage, tomatoes of blood and smells of all the meals my baby would not eat. Food stopped being about the abundance of past memories and turned into a reminder of future memories that would never be.

My mother counseled me to prepare rich foods cooked in ghee to mend my body and drink doodh pati chai, in which tea leaves are simmered in whole milk, cardamom, cloves and sugar to heal my heart, but grief had left me incapable of entering the kitchen. Instead, we lived on delivery pizzas.

A few weeks after the miscarriage, my doorbell rang one afternoon. It was the mother of my 5-year-old daughter’s best friend. She hugged me and told me my daughter had told her daughter and she was so sorry. Through a blur of tears, I took the aluminum dish she handed me. She instructed me to bake it for 40 minutes at 350 degrees.

I had not yet acquired a taste for Mexican food and I was not a fan of chicken, but I thanked her. After she left, I told myself that all I had to do in the kitchen was turn on the oven to 350 degrees. I put the dish on a rack. I switched on the timer. When the timer pinged, I placed the dish on the table and held my hands over it. The fragrant steam warmed my cold fingers. I inhaled the smell of a food I’d never eaten in my life. I lifted a forkful to my mouth. I chewed and chewed and finally I managed to swallow. I did not like it and yet I chewed and swallowed and chewed and swallowed because the fact is it was not enchiladas I was eating.

I did not finish the enchiladas. In fact, I made sure to leave a little in the container and I let it take up as much space as it needed in the fridge for as long as possible. It would take me years to develop a taste for Mexican food and a few more years before I’d try a recipe at home. I made enchiladas with chicken in red sauce and with each bite I thought of the woman whose kitchen-kindness rescued me from aloneness and brought me back, forkful by forkful, into the world of the living where people cooked and ate and drank and made memory.

These days when I make a memory meal, there is my grandfather in fiery milk and keema, my father in yellow lentils, my mother in glistening collard greens and among them are enchiladas in red sauce; the child I lost and the person who found him.

Soniah Kamal is the author, most recently, of “Unmarriageable: Pride & Prejudice in Pakistan.”