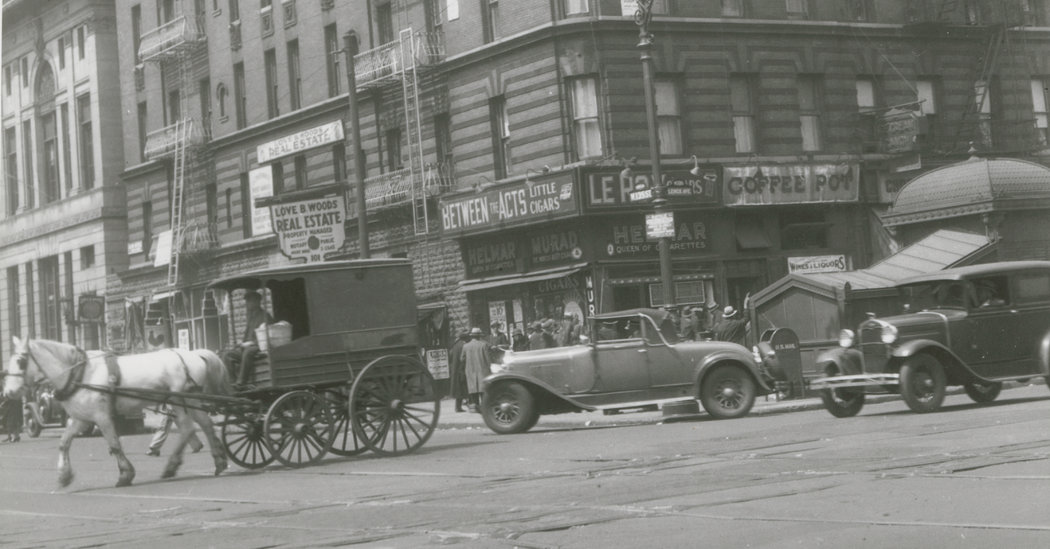 This article is part of Overlooked, a series of obituaries about remarkable people whose deaths, beginning in 1851, went unreported in The Times.

It’s fall, maybe October, in the early 1900s. On a bustling Manhattan street corner, Lillian Harris Dean stands in a starched gingham dress, her fingers resting on the handlebar of a baby carriage.

“Pig’s feet!” she cries to passing neighbors, as she does in a play about her life written by Daniel Carlton. “A taste of down home for your weary bones.”

From the baby carriage — an early version of a food truck perhaps — Harris Dean sold traditional Southern meals: fried chicken, corn and, of course, pig’s feet. Her cooking soothed the palates of African-American transplants who, like her, had come to the unfamiliar metropolis in the purgatorial period between Reconstruction and the Great Migration.

She eventually built a name and a fortune as a culinary entrepreneur and as a landlord, squarely planting herself in the history of Harlem. Before long her neighbors christened her “Pig Foot Mary,” the Madonna of the sidewalk.

“People talk about seizing an opportunity and finding a market — she did all of that,” Jessica B. Harris, a food historian and cookbook writer,  said in a phone interview. She wrote about Harris Dean in “High on the Hog: A Culinary Journey from Africa to America” (2011).

Harris Dean used her cooking as a path toward financial independence, taking hold of an informal culinary economy that has historically provided opportunities to women of color, from African-American caterers in the 1700s to churro sellers in today’s subways.

She marketed her food by tapping into the nostalgia of her customers, offering them a tether to the culture they missed as they tried to forget the legacy of slavery and servitude they had left behind.

Lillian Harris was born in the Mississippi Delta between 1870 and 1873, according to a 1929 obituary published in The New York Age, a local African-American newspaper. Her parents were also born in Mississippi, census records show.

After the end of slavery, Harris “drifted into New York penniless” in 1901, the prominent black journalist Roi Ottley wrote in “Springtime in Harlem,” an article he published in his 1943 book “New World A-Coming: Inside Black America.”

She saved her first $5 while working as a maid in New York, polishing floors and shaking out sheets. With her savings she bought a secondhand baby carriage, a 59-cent tin boiler and a charcoal stove. She set up shop each day on a corner near Columbus Circle, alternating between the only two cotton dresses she owned.

“From the beginning, Miss Harris exercised care and cleanliness,” The Age said of her in a profile in 1923. “Everything about it was spotlessly clean, including her own poor garments.”

Soon, she traded in the baby carriage for a portable steam table that she had designed herself. After two years, she moved her business to Amsterdam Avenue between 61st and 62nd streets, where she stayed for 11 years. Business blossomed. She went from selling a dozen pigs’ feet a day to more than 100 a day and 325 on Saturdays. Though her cooking methods are lost to time, she most likely first boiled the pigs’ feet, which are similar in consistency to sausage, and then served them fried.

“As many as 25 customers have stood in line at her stand waiting to be served,” The Age wrote, adding that “she had people eating pigs’ feet who never ate pigs’ feet before.”

People came from as far away as New Jersey and Long Island just to try her cooking, the newspaper wrote.

In 1908, Lillian Harris married John Dean, an educated man from Lynchburg, Va., who had been a postal worker and owned a newsstand.

As Harlem became a hub for the thinkers, musicians and artists of the emerging Harlem Renaissance, she moved her business there in 1917 and worked on the corner of 135th and what is now Malcolm X Boulevard for 16 years. Like the famous street vendor in “The Invisible Man,” Ralph Ellison’s 1952 novel and ode to Harlem, the smell of her cooking gave them a sense of belonging.

“She was saying to people, ‘This is your place,’” said Psyche Williams-Forson, the chairwoman of American Studies at the University of Maryland. “This street corner, this city, this part of the world. This is your place.” Williams-Forson wrote about Harris Dean in “Building Houses out of Chicken Legs: Black Women, Food, & Power” (2006).

Carlton’s play “Pigfoot Mary Says Goodbye to the Harlem Renaissance” was presented in 2011 by the Negro Ensemble Company and produced by the Metropolitan Playhouse. Benja Kay Thomas played the title character. Written entirely in verse, the play takes place on Harris Dean’s last day on the corner as she says goodbye to friends.

In researching her life, Carlton said in an interview, he found that Harris Dean “was somebody who talked to both the domestic workers and the people who were creating the culture.”

Around the corner from her stand, he said, A’Lelia Walker, the daughter of the beauty entrepreneur Madame C.J. Walker, hosted elaborate dinner parties as part of her Dark Tower salon.

“People like Langston Hughes and Zora Neale Hurston would come out of these fancy dinners and probably want some pig feet, some chitlins, some hog maws,” Carlton said.

Pig Foot Mary was also a minor character in “Hoodlum,” a 1997 film about Harlem in the 1920s starring Laurence Fishburne and Vanessa Williams. Harris Dean was played by Loretta Devine.

Using the money from her successful stand, Harris Dean switched her focus to real estate, buying buildings and renting apartments during what became known as Harlem’s gold rush.

“She couldn’t read or write, but she could sure count her money,” Regina Abraham, who wrote “Pig Foot Mary: The Saga of Lillian Harris,” a children’s book published in 2011, said in an interview.

Harris Dean owned several other buildings around Harlem, renting and selling them as the neighborhood grew. One property she owned became a residence for the Young Woman’s Christian Association.

Today her buildings have become Harlem Hospital, a Salvation Army complex and St. Mark the Evangelist Church. And on the Harlem corner where she once sold pigs’ feet stands the Schomburg Center for Research in Black Culture, an outpost of the New York Public Library.

Harris Dean became a philanthropist later in life. In 1927 she gained attention for cooking “an old fashion pig foot dinner” for the Working Women’s League. An article in The Age about the event described her as “one of the wealthiest women in Harlem.”

She left New York in 1923 and traveled for six months, stopping in places like Yellowstone National Park and Los Angeles, The Age wrote.

Her body was brought back to New York, and hundreds came to the funeral. The Rev. Adam Clayton Powell Sr., the pastor of the Abyssinian Baptist Church and the father of the future congressman, gave her eulogy, praising her for “her business ability, her thrift and her desire to help her race.”