New York’s Best Outdoor Food Fair? We May Have Found It 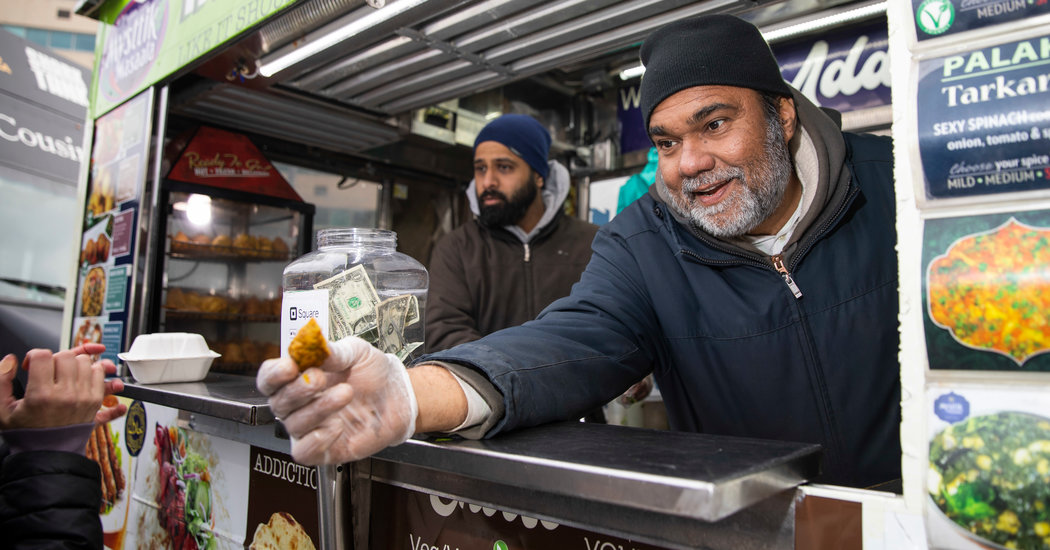 Yailyn Nuñez and Christian de Jesus love the Bronx. But one thing is missing, they said: accessibility to different kinds of food.

“Jesus doesn’t eat meat, so there aren’t a lot of options,” Ms. Nuñez said. “You see a lot of Dominican food, fried fish,” she continued. “You have choices, but certain cuisines you don’t get.”

The Bronx is known for its multiculturalism and international foods. It’s just that certain appetizing neighborhoods and go-to restaurants have always been spread out.

But now the borough has a culinary anchor, if you will: the Bronx Night Market.

Last weekend the couple walked from their home on East 196th Street to Fordham Plaza, in the Fordham neighborhood, where a harvest festival presented by the Night Market was in full swing.

The plaza was decorated with hay bundles, pumpkins, and neon signs. A jazz trio was playing. Along the perimeter were dozens of vendors selling everything from whole lobsters to catfish balls with mango sauce.

“This is elevated stuff,” Mr. de Jesus said. “It’s not what you usually see in the Bronx.”

Brooklyn has Smorgasburg. Queens has its night market. And now the Bronx has a booming food event to call its own.

In just its second year, the Bronx Night Market has grown from happening sporadically throughout the summer to producing events throughout the four seasons. This year it took place almost weekly from May through October. Following last weekend’s harvest festival, there will be a holiday market Dec. 20-22. A beer celebration is also in the works for next spring.

The goal for the fall and winter events is to make them “like Bryant Park or Union Square,” said Marco Shalma, 44, one of the founders. “It will be something that stays open for the full season and really caters to the local community.”

Over the summer almost 7,000 people visited the Night Market every Saturday night it was held, according to the founders. At least four food vendors have gone on to open brick-and-mortar shops. But questions remain about the event’s year-round vitality, whether it should invite vendors from outside of the Bronx (currently, it does), and how important it is to keep the food affordable.

The harvest festival, the first cold-weather event, attracted half the amount of guests as the draw of a typical summer night. Already the market has had to branch out from solely including Bronx-based businesses. And many vendors have strayed from selling goods for $7 or below, price points established by the founders in order to have a few inexpensive snacks as options.

But the chefs in the stalls have a bottom line to meet. “A lot of Bronx guys can’t make it,” said Randy Carpenter, a vendor from Port Morris and owner of the Fried Kitchen, along with his son, Christopher Carpenter. “They think they can make a million dollars in one day, but it’s hard to make it.”

It should be noted that Mr. Carpenter, who offers a chicken and waffle sandwich where the waffle is made from mashed potatoes, bacon, Cheddar cheese, and chives, seems to be making it. He is on track to open a Bronx-based restaurant within the year.

“I’m looking at a building that has been closed for nine years,” he said of a space in Morris Park, in the Bronx, which he’s exploring for the restaurant. “It’s in an area like the Brooklyn Navy Yard that was empty, and now they are building co-ops.”

Amanda Celestino, 29, the editor of Edible Bronx, was behind the idea for the Night Market. Tired of going to food festivals in other boroughs, she wanted one in the neighborhood where she went to college and had explored as a child with her family. “I knew there was a passion for food in the Bronx and a hunger for fun things to do,” she said.

Three years ago she met Mr. Shalma, who is the owner of a media company and has experience throwing large events. Together they tapped Fordham Plaza as their location. Metro-North trains, three subway lines, and 15 bus routes stop at Fordham Road, a station close to the plaza. According to the Fordham Business Development District 180,000 people pass through the station every 12 hours on average.

The duo has benefited from having the support of Wilma Alonso, the executive director of the Fordham Road Business Improvement District. Full of chain stores, the neighborhood has always seemed like more of a place for running errands than spending a Saturday night.

Ms. Alonso had already been trying to change that perception with quirky activities from zip-lining on Fordham Road to installing large water slides in the plaza. “These guys brought life to a public space that was being underutilized,” she said. “For the first time people are willing to spend time in the neighborhood.”

“We were making something out of nothing, so we really didn’t predict the first festival to be as successful as it was,” Mr. Shalma said. “But from the start, it hit a note with people, and we realized we have something good.”

Some vendors have opened restaurants following successful stints with the Night Market.

After Blenlly Mena, the founder and co-owner of the Dominican plant-based meal-prep company Next Stop Vegan started selling goods at the market, she was flooded with hundreds of customer requests for her food.

Earlier this year, she started to convert her catering kitchen into a restaurant on the weekends. “I think we could have managed as a company without the Bronx Night Market, but we wouldn’t have had this rush to open a restaurant so soon,” she said. “It made everything happen much faster.”

The market has also inspired some residents to make the jump from home cooks to entrepreneurs. The Bah brothers, El Hadji, 34, Alpha Omar, 27, and Algassimou, 25, live close to Fordham Plaza and stumbled upon the market during the summer of 2018. Walking around, it occurred to them that this might be the perfect place to sell their burgers.

This summer, they opened the Bx Burger Co. at the market. Last Sunday, it was the only vendor to have a line. Maybe it was their “baconator burger,” made with brisket and topped up with smoked bacon, Cheddar cheese, and a special sauce, that drew the crowds.

But there is a tension between local vendors and outsiders. Many locals feel only Bronx businesses should be at Fordham Plaza. After all, the competition is stiff. For the 2019 season, Ms. Celestino received 500 applications for just 45 slots.

But Ms. Celestino insists it’s more important to have high-quality vendors that are accessible than those exclusively from the area. “It can’t just be anybody off the street,” she said. “It has to be people we believe in,” she continued, in order to create “an interesting theater event.”

“I think it should stay local,” said Mr. Carpenter, of the Fried Kitchen. “It helps small businesses grow and stay in the community.” As a customer, Mr. Jeng, the Manhattanite, agreed. “I wanted to check out chefs that were in the Bronx that I couldn’t get elsewhere in the city,” he said.

For the time being, the market is open to businesses from other boroughs, and other states, too. Some of these vendors say it’s helped expand their businesses into the borough.

Jessica McDonald, the owner of Jess Pudd’in, which makes banana pudding and individual carrot cakes in Sunset Park, Brooklyn, said that before joining the Night Market, she didn’t know how to sell in the Bronx. But that’s no longer an issue for her.

“Now I am going to be in local stores by spring of next year,” she said. “It’s my goal to be in all five boroughs.”

Charlie Hunter, a sales executive for Nahmias et Fils, a distillery in Yonkers, got three new account leads in the Bronx from the Night Market. “Two were from liquor-store owners, and one was a lady who is a regular at another store,” he said. “They just walked up to the booth.”

Mr. Hunter said the Bronx Night Market is the only event in the borough that brings him face to face with customers. “This is where real people live, and this is who we are trying to reach,” he said. “And we’re just based up the road. We are all New Yorkers.”