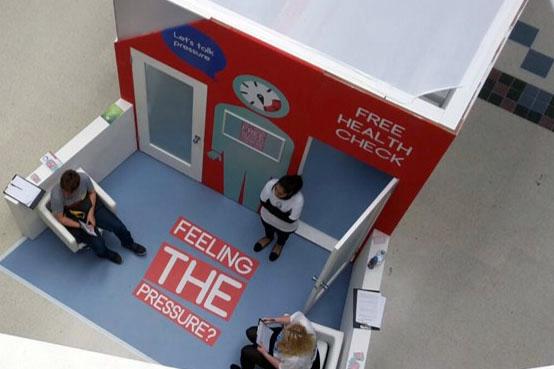 New study suggests that less than a fifth of shoppers were aware of the need for tests of the pressure inside their eyes (intraocular pressure), when measured at a Pop-Up health check station set up across eight shopping centres in England.

High intraocular pressure is a major risk factor for ‘primary open angle glaucoma’ (POAG), the most common form of glaucoma1, as well as other forms.

In half of cases, volunteers were also invited to have their blood pressure tested to see whether this widely known, general health check might increase pick-up of the test of intraocular pressure, and thus raise awareness of having it checked and the importance of visiting an optometrist regularly. Combined testing was held on a different day to the test of intraocular pressure alone.

The study found that only 19% of shoppers knew anything about their intraocular pressure, including the tonometer test for it; as opposed to 71% who had some knowledge about their blood pressure.

Glaucoma is an umbrella term for a group of degenerative diseases of the optic nerve at the back of the eye, which can cause irreversible loss of a person’s field of vision, and is estimated to represent 11% of cases of serious sight impairment in the UK, second only to macular degeneration2.

In England, 90% of referrals for cases of suspected glaucoma into secondary specialist care are the result of opportunistic case findings by optometrists3-5, but it is estimated that one third of primary open angle glaucoma cases remain undiagnosed in the UK6.

The Pop-Up Health Check stations were set up in shopping centres in Bristol, Cambridge, Coventry, Northampton, Nottingham, Preston and Stoke-on-Trent.

Dr Laura Edwards is a Postdoctoral Research Fellow at Moorfield’s Eye Hospital and led on the study testing while at the Crabb Lab at City, University of London. She said:

“Awareness of eye pressure among the public is abysmally low. Whilst a definitive diagnosis of glaucoma requires many tests, we wanted to see whether advertising and administering one of the tests directly to the public in a targeted community setting was feasible and could raise awareness of the importance of this aspect of eye health.

“More people engaged with our Pop-Up stations on days when our eye health check was offered alongside testing blood pressure, which suggests that an unfamiliar health message can be promoted by aligning it with one that the public is more familiar with.

“We hope our findings can inform strategies for public health schemes that engage the public with their eye health and promote education about the importance of regular eye examinations.”

The research is published, open access, in the journal, BMJ Open.

Alternatively, contact the City, University of London Press Office at pressoffice@city.ac.uk or on 020 7040 8788.

About City, University of London

City, University of London is a global higher education institution committed to academic excellence, with a focus on business and the professions and an enviable central London location.

City has around 20,000 students (46% at postgraduate level) from more than 160 countries and staff from over 75 countries.

In the last REF, City doubled the proportion of its total academic staff producing world-leading or internationally excellent research.

More than 140,000 former students from over 180 countries are members of the City Alumni Network.

The University’s history dates from 1894, with the foundation of the Northampton Institute on what is now the main part of City’s campus. In 1966, City was granted University status by Royal Charter and the Lord Mayor of London became its Chancellor. In September 2016, City joined the University of London and HRH the Princess Royal became City’s Chancellor.

Led by President, Professor Sir Paul Curran since 2010, City has made signi?cant investments in its academic staff, its estate and its infrastructure and continues to work towards realising its vision of being a leading global university: it has recently agreed a new Vision & Strategy 2026.

Artificial intelligence identifies the tiger mosquito from photos in the Mosquito Alert
14.05.2021