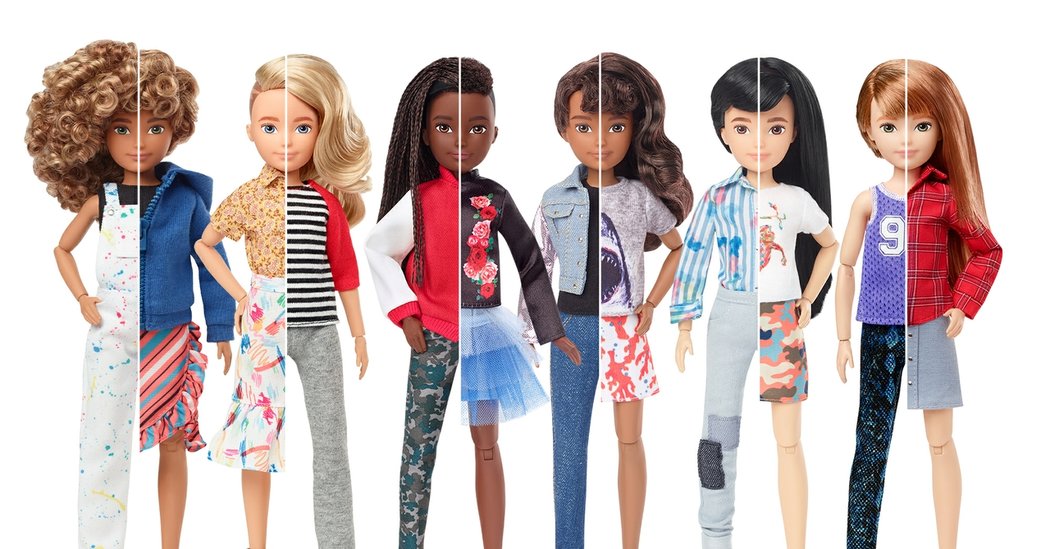 Mattel, the company that conquered the doll world by dividing it into idealized Barbies and Kens, is introducing a new line of gender-neutral dolls for boys, girls and children in between.

The new line, introduced on Wednesday and called Creatable World, is intended to reflect our culture “as the world continues to celebrate the positive impact of inclusivity,” said Kim Culmone, the Mattel executive who led the team that designed the new dolls.

Available in different skin tones, each doll comes with two wigs of different lengths — hair types include curly, straight and braided — and several wardrobe options that allow children to style the doll with “short or long hair, or in a skirt, pants or both,” Culmone said. Each kit, as they’re called, costs about $30.

Beliefs and opinions around gender are rapidly changing, and in the process creating new marketing opportunities, including in fashion, publishing and toys. But one thing the dolls definitely are not, Mattel says, are gender-neutral Barbies.

They are intended to be “relatable,” not “aspirational” like Barbie, said Michelle Chidoni, a Mattel spokeswoman. And they are not supposed to be adults, like Barbie and Ken, but rather they were “designed specifically to have a youthful gender-neutral appearance,” said Culmone.

To develop the dolls and their accessories — all components are original, and research and design took 18 months — Mattel worked with physicians and experts knowledgeable about gender identity as well as 250 families across the country, including children of all gender identities. “We talked to them about what they had in dolls currently and what they were looking for,” Culmone said.

As for the parents, researchers found a growing concern around gendered toys for their children — though a generational divide on the subject was certainly evident, Chidoni said. “While this was something that was really innate to the kids, it was something that, in some cases, was a little bit harder for their parents to understand,” she said.

Culmone acknowledged that “this product line isn’t necessarily for everyone.”

“Some parents may be uncomfortable feeling like the toy is creating a situation where gender will need to be discussed with their child,” she said, “but that’s a really personal family decision.”

And while Mattel doesn’t want to wade into political waters on the subject — “we see this as something that’s all about play and not about politics,” Chidoni said — gender identity has become highly politicized in recent years.

The Trump administration has reversed transgender-friendly policies of the Obama administration regarding schools, prisons and military service. And in recent years, many school districts have faced contentious legal challenges over which bathrooms transgender students should be allowed to use.

Despite this increasingly fraught climate, the toy industry has maintained a relatively proactive approach on the issue, moving away from gendering toys and children’s items.

In 2015, Target announced that it would no longer use signs to label toys for girls and boys in their stores. That year, the Disney Store banished girl and boy designations from its children’s Halloween costumes, lunchboxes, backpacks and other accessories, labeling all items “for kids.” And Amazon no longer uses gender-based categories for children’s toys.

And while Creatable World dolls are the first to address gender identity from a major manufacturer, others have been available. In 2017, Tonner Doll Company announced the Jazz Jennings doll, based on the girl of the same name who became famous when, at age 6, she appeared in an episode of ABC’s “20/20” that focused on transgender children and their families. That same year, a Canadian nonprofit that helps transgender children and their families introduced the nesting doll Sam, an educational toy representing a stage of gender exploration with each layer.