Manny Jacinto of ‘The Good Place’ Plummets to Earth 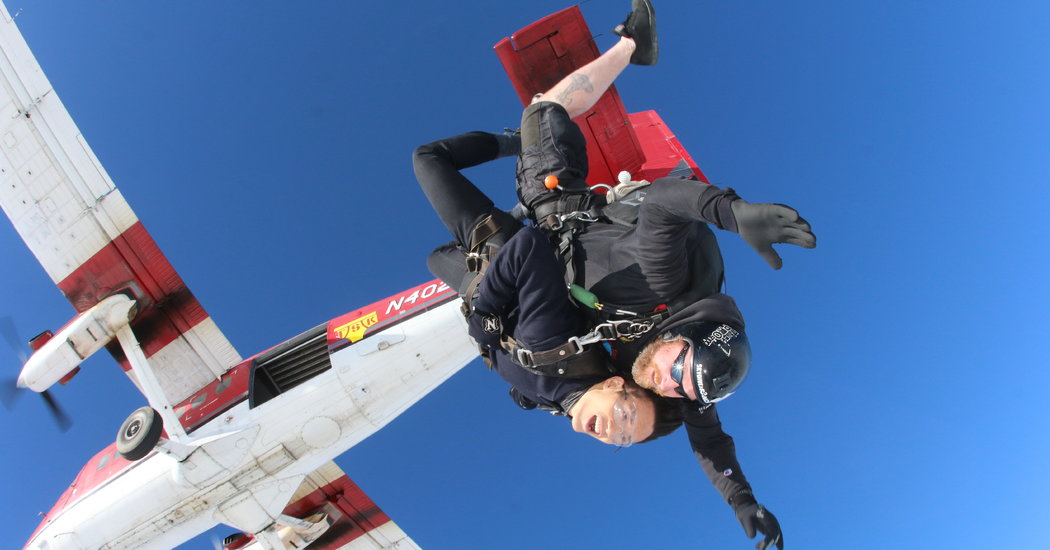 Manny Jacinto, a star of the metaphysical sitcom “The Good Place,” would like to be the kind of actor who does his own stunts. He isn’t. “After you get hit four or five times, you say, ‘No, O.K., let’s get the stunt double,’” he said.

But on a bleak Sunday in November, Mr. Jacinto, 32, arrived at Skydive the Ranch in Gardiner, N.Y., about two hours north of New York City to jump out of an airplane at 13,000 feet. No stunt double had been hired.

“It’s a bucket-list item of mine for sure,” he said.

And maybe a chance to catch up to Tom Cruise, with whom he will appear in the upcoming “Top Gun: Maverick.” (Details of the movie are scarce, but Mr. Jacinto confirmed that he plays a pilot.) “He’s been telling us stories about ‘Mission: Impossible’ and how he had to jump out of that plane, I forget how many times, just to get that one shot,” he said.

After checking in, Joe Richards, an owner of the facility, showed Mr. Jacinto into a small unheated room and set him up with a 10-minute safety video that warned of the many dangers of skydiving.

He stared at the screen, his hair pleasingly mussed, his cheekbones — the inspiration of many a thirst tweet — sharper than most kitchen implements. He seemed relaxed for a man about to fall through a mile or so of troposphere.

While the video played, he worked through a lengthy waiver. “Signing this waiver demonstrates your willingness to accept the risk of serious injury or death in exchange for the thrill of making your tandem parachute jump,” the man on the video said.

“Cool,” Mr. Jacinto said. He had been assured that there had been only one death on the premises in 35 years and that last year had been the safest year on record. He signed and initialed, initialed and signed.

Under emergency contact, he entered his fiancée, Dianne Doan, an actress and dancer, then showed pictures of their recent engagement. They met eight years ago, “through the magic of dance,” Mr. Jacinto said, referring to a hip-hop dance crew he joined while studying at the University of British Columbia in Vancouver.

Fans of “The Good Place” celebrate the romance between Mr. Jacinto’s character, Jason Mendoza, a “pre-successful” D.J., and Janet, the all-powerful digital assistant played by D’Arcy Carden. On a recent episode, Janet describes the dopey, big-hearted Jason as a “colorful rainbow blob stuffed inside a hot life-size action figure.”

“It’s a special relationship, but I like to think this one is just as special,” he said of Ms. Doan. They recently bought a house in Burbank, Calif., and they have been busy “renovating and doing adult stuff, very non-Jason Mendoza things.”

Skydiving, he added, “is a Jason Mendoza activity for sure. He would probably get a Molotov cocktail, throw it up, burn through his parachute. Be a good way to go.”

With a degree in civil engineering, Mr. Jacinto is clearly a lot brighter than Jason (and really, who isn’t?). But he also exhibits some of the same carefree exuberance and happy-go-lucky bravado that has enamored him to “Good Place” fans.

With the waiver signed, he walked outside, still calm. “I get more nervous, like, for an audition,” he said. He thinks of himself as a thrill seeker, with acting as one more thrill. “It’s a reminder for me to wake up a little bit and not just coast through life,” he said.

Born in the Philippines and raised in Richmond, British Columbia, Mr. Jacinto planned to be an engineer, like his father and his paternal uncles, but hip-hop dancing led him to acting. After a few years booking spots on American TV shows that were filmed in British Columbia (“Supernatural,” “Wayward Pines”) and an arc on the Canadian spy drama “The Romeo Section,” he landed “The Good Place,” which is now in its fourth and final season.

He hadn’t known he was funny, but as Jason, he delivers punch line after punch line. “Jason gets to make everybody in the room laugh most of the time,” he said, with some bittersweetness. “I don’t know if I’ll ever be able to get that again.”

At the clubhouse, he met John Kieran, a bearded 40-ish tandem skydiving instructor. “Hey, man, I’m going to be jumping with you,” Mr. Kieran said. “And, hey, before I get too goofy, I’m a huge fan.”

He checked that Mr. Jacinto, who wore a puffy vest under a zip-up blazer was warm enough, then strapped him into his harness, leaving the straps loose. Mr. Kieran talked about how they would approach the airplane door, how they would keep their knees bent, how they would lean back, bellies out (Mr. Jacinto has no discernible belly) and then allow themselves to fall.

“I want to be like a bullet flying through the air,” Mr. Kieran said. After a minute of free fall, they would open the parachute together.

“Any questions?” Mr. Kieran said. “Concerns? How are you feeling?”

They made their way over to the plane, a 1968 Twin Otter first used by the British Geological Survey on the Antarctic ice cap. Mr. Kieran tightened his straps, advising Mr. Jacinto to “reach down and make sure you get your junk up out of the way,” he said.

Ducking their heads, they filed in behind a group of men wearing colorful wing suits. With a buzz and a judder and the sharp smell of engine oil, the plane took off.

Mr. Jacinto sat, unsmiling, as Mr. Kieran whispered in his ear, reminding him of the mechanics of the jump. About 10 minutes later, the plane reached 13,000 feet and the door was hefted open, revealing wispy clouds and frost-bleached fields below.

The first divers fell out. Mr. Jacinto and Mr. Kieran approached in small, careful steps. “Ready,” Mr. Kieran said. “Set.” The wind snatched his “Go” away. They leaned back and fell out.

Five minutes later, Mr. Jacinto was back on the ground, dazed and happy.

Soon Mr. Kieran handed him a certificate, some stickers and a plastic cup of champagne.

“It was all really fast,” Mr. Jacinto said. “There was no time for me to think. It was like, ‘O.K., this is happening. O.K., let’s just do this.’ I was just kind of focused on keeping the snot in my nose.”

Was it heaven? Paradise? “It was pretty damn amazing,” he said.