Made in Madrid, by Hand 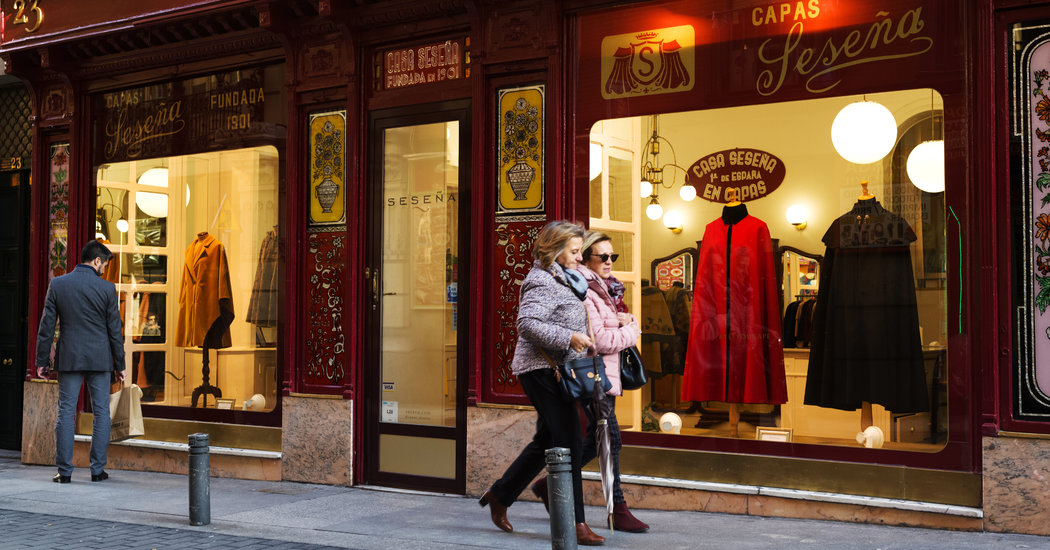 MADRID — Living in Europe, I’m frequently reminded of an oft-repeated dictum from my high school French teacher, Madame Morris, who insisted that Europeans — at least the late 20th-century ones she knew — would rather invest in a few quality garments than a closet full of cheaply made clothes.

While Zara, H&M and other fast-fashion brands now offer ample opportunity to stray from the cashmere path, in Spain, at least, shoppers can still expect to find locally produced garments and articles of extraordinary quality that are relatively affordable compared to international brands. And when they cannot find what they like, they get it made.

Perhaps more than many European metropolises, Madrid remains steeped in traditional handicraft. People still make things in the city — from custom jewelry and hand-hammered silver to myriad types of baskets and brooms. Beyond the more mundane shirts, suits and shoes, shoppers can find artisanal umbrellas, hats, guitars, fans, leather goods, ceramics, glassware, carpets, furniture, combs and brushes — virtually all of which can be customized or commissioned from scratch.

For visitors with an itch for shopping, the experience can be thrilling. As interior designer — and global shopper — Michael Smith discovered: “Once you dive into handmade or bespoke Madrid there’s almost too much to consider,” he said in a telephone interview from Los Angeles. “How do you want to break it down — by neighborhood? By street? By category?”

Mr. Smith, whose partner James Costos was the United States ambassador to Spain from 2013 to 2017, owns “many, many pairs” of custom Glent shoes and shirts from Camiseria Burgos. “It feels so old-guard but they’ll make you anything,” even guayaberas, linen shirts with four pockets and two vertical pleats. And he has become a collector of Lopez silver, having purchased new works but also snapping up vintage pieces at auctions.

I had my own awakening to the ubiquity and excellence of Spanish design and craftsmanship about a dozen years ago in Barrio de Las Letras, a tangle of narrow streets better known back then for boisterous taverns than luxury goods. Having fallen in love with a wallet in the window of a shop called Valentin del Barrio, I went inside only to discover that “my” wallet came in a hundred different color combinations. Though I eventually bought dozens of wallets over the years — commissioning special ones as gifts and stockpiling a few in my sock drawer — I still use the very first one I bought, which cost a whopping 25 euros and only gets better with age. Sadly, the shop is gone but the wallets are still sold at several boutiques starting at about €35 (just under $39).

Recently, one of the city’s most esteemed heritage businesses, Seseña which first opened its Belle Époque door to sell custom-tailored capes in 1901, has managed to honor tradition while setting new trends.

Since 2014, Marcos Seseña, representing the fourth generation to run the family business, has been rejuvenating the brand, doing capsule collections with widely known designers and sending capes down the runway at Madrid Fashion Week, suddenly making the garment relevant to younger generations of stylish madrileños. “Our essence hasn’t changed,” he said. “But we’ve introduced new designs, new fabrics and more contemporary details. Frankly, it was about time.”

Men’s styles now include “Port,” (€710) which evokes a peacoat with epaulets and a bit of naval swagger, as well as “Club,” a design based on the classic bomber or baseball jacket. For women, where tradition once dictated a discreet black or charcoal wool cape with velvet lining, there is now a bright yellow waterproof cape (€470) that riffs on the classic raincoat for children. Capes can be made to measure with clients choosing all manner of design, details and finishing.

Instead of taking the stuffiness out of traditional formal wear, Fernando Garcia de la Calera of the Concrete is adding tailored elegance to elevate the humble fabrics and comfortable cut of traditional work clothes. His specialty is bespoke jeans (about €250), which typically require one session for measuring followed by a trial fitting a few days later. Fabric choices include raw Japanese denim, among other jean materials, as well as raw linen and merino wool. Madrileños may have to wait 10 to 14 days for their custom fitted garments but for out-of-town clients, the atelier tries to expedite the process so clients can wear their new custom jeans on their flights home.

Across the street from the Concrete is Madrid’s go-to spot for stylish encaustic cement tiles — the ones invented in the late 19th century to replicate the look of elaborate carpets on easy-to-clean tile floors and now popular in more simplified abstract designs for trendy hotels, restaurants and shops as well as homes. Founded by Ivan Alvarado in 2002, Mosaista offers customers hundreds of existing tile designs and color combinations from which to choose as well as collections by contemporary designers like Teresa Sapey. But clients can also walk in with a drawing and create their own unique patterns. Prices range from €65 to €90 per square meter and the product usually ships in about five weeks.

Barrio de Las Letras is now a hotbed of artisinal activity, where you’ll find supple custom leather gloves for about €60 at Santacana and incredibly inventive hand-painted scarves, robes and kimonos at Lola Fonseca. Lola’s son Claudio Mendez translates customers’ inspiration — anything from a Greek statue to an underwater video of sharks — into flowing gossamer masterpieces (from about €500). There are even artisanal pastries at Motteau for a post-shopping treat.

The arts of the table are another area in which Spaniards expect quality and no one is blending the concepts of “art” and “table” like Iloema, which hopes to revive age-old traditions of Spanish embroidery. By pairing contemporary artists and designers like Antonio Ballester Moreno and Elena Rohner with groups of local embroiderers in various regions of Spain, Iloema fosters a “creative encounter or dialogue between artist and artisan,” said Silvia Delgado de Torres, one of its founders. “They are equals in the process and the product is better for it.”

Finally, Spain still offers the traditional approach to traditional craft at the royal tapestry and glass workshops, among the few European royal workshops to survive into the 21st century. While the tapestry workshop can still produce hand-loomed carpets sized for a palace throne room or a full cycle of Goya’s hunting scene tapestries, they also do collaborations with contemporary artists scaled for more modest homes.

And though it was established in the mid-18th century, the royal glass workshop produces a set of sleek and richly colored highball glasses inspired by 1940s Hollywood film noir that it bills as the perfect vessel for anything served “on the rocks.”