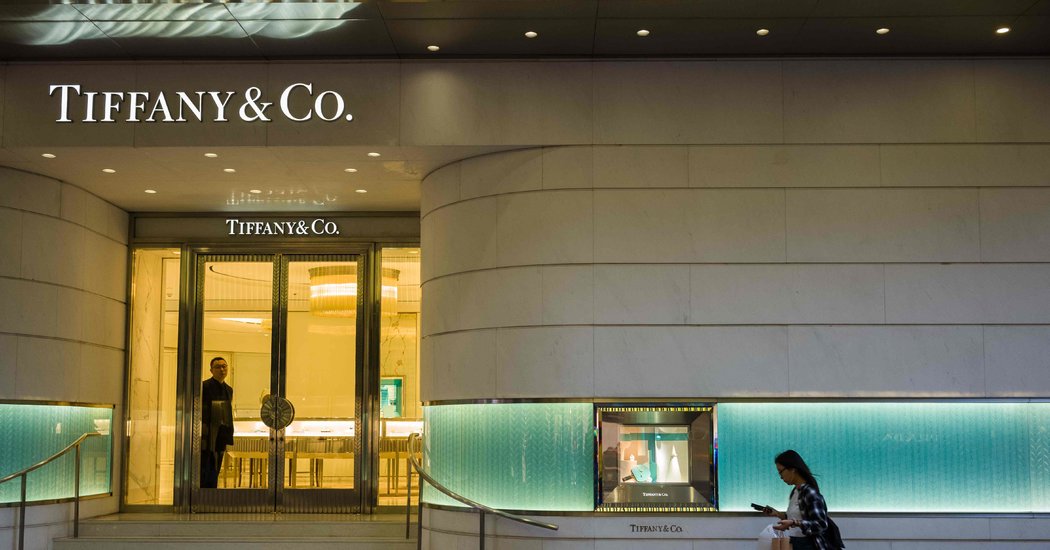 LVMH Moët Hennessy Louis Vuitton, the world’s largest luxury goods company, said on Monday that it had reached an agreement to buy the jeweler Tiffany & Company in a $16.2 billion deal, the largest ever in the luxury sector.

Th acquisition will give LVMH a bigger foothold in the United States, as well as help Tiffany in Europe and China. It will also cement the status of Bernard Arnault, the LVMH chairman and chief executive, as the most acquisitive deal maker in the luxury business.

“Tiffany is an American icon and was on the list of brands for a long time we thought was a good potential match,” Mr. Arnault said in a telephone interview from Paris.

The acquisition would add another prominent American name to the LVMH stable of brands, which includes Dior, Givenchy, Fendi and Dom Pérignon. The deal would help propel the French luxury company into a leadership position not only in traditional soft luxury goods like clothing and handbags, but also what is known as the hard luxury sector, which includes watches and jewelry.

Some analysts expect the announcement to trigger other deals as brands fight to compete in a world of behemoths like LVMH and Richemont.

“We expect this to be the starting gun for a further round of industry consolidation in the luxury sector over the next 12 to 18 months, with the significant polarization we continue to see between the stronger and weaker brands,” said Swetha Ramachandran, an investment manager at GAM Global Luxury Brands Fund.

The agreement with Tiffany, known for its signature blue boxes and a prominent role in the Audrey Hepburn film “Breakfast at Tiffany’s,” is the second major investment in an American brand for LVMH this year since it created a new luxury house, Fenty, with Rihanna, the musician-actor-style setter.

Tiffany has worked to attract younger shoppers, whose shopping preferences (and marital habits) might weigh on the company’s results. But in a conference call on Monday, Jean-Jacques Guiony, LVMH’s chief financial officer, expressed no such concerns.

“Love will prevail,” he said. “And we expect the diamond ring in a blue box to prevail as well.”

Mr. Arnault, who has in recent years swept brands like Belmond, the luxury travel group that owns hotels such as the Cipriani in Venice, and Rimowa luggage into the fold at LVMH, said he first went to Tiffany’s Fifth Avenue store when he was living in New York in the 1980s. And he has kept an even closer eye on the brand over the last 18 months as he has mulled other acquisition opportunities.

The deal will leverage LVMH’s presence and expertise in China to help Tiffany expand in the region, where the companies will look to bring more of their goods to mainland consumers in an effort to tap into their spending power. Chinese tourist spending has been hit hard by the depreciation of the renminbi, the trade war between the United States and China and protests in Hong Kong. Mr. Arnault said he also believed the brand had real potential to expand its reach in Europe.

Tiffany is “strong in the U.S. and Japan, but weak in Europe and not up to growth in China,” Mr. Arnault said. “There we can help a lot, find the best locations.”

Mr. Arnault said he hoped to follow the same model at Tiffany that helped bolster sales and profitability at Bulgari, which LVMH acquired in 2011.

“We will focus on building long-term desirability,” he said. “When you are an independent brand listed on the American stock exchange, your goal has to be the next quarter profit. We can free them to have a different state of mind in the company.”

LVMH’s share price opened 1.8 percent higher after the agreement was announced. The company has performed well in 2019; its stock has climbed 58 percent since the beginning of the year, and its sales jumped 11 percent in the third quarter, despite worries about a slowing global economy and protests in Hong Kong.

Shares for Tiffany have struggled to gain traction this year, but jumped in October on news of the deal talks. For the 12 months that ended Jan. 31, the jeweler reported $586.4 million in net income, a 9 percent increase from the year before.

The deal, which still requires the approval of Tiffany’s shareholders, is expected to close in the middle of next year.

Besides Tiffany’s business and growth prospects, and the fact that, like Louis Vuitton, it is sold only through its own network of stores, Mr. Arnault said he was attracted to one unusual aspect of the Tiffany profile. “It’s the only brand I know that owns a color,” he said.