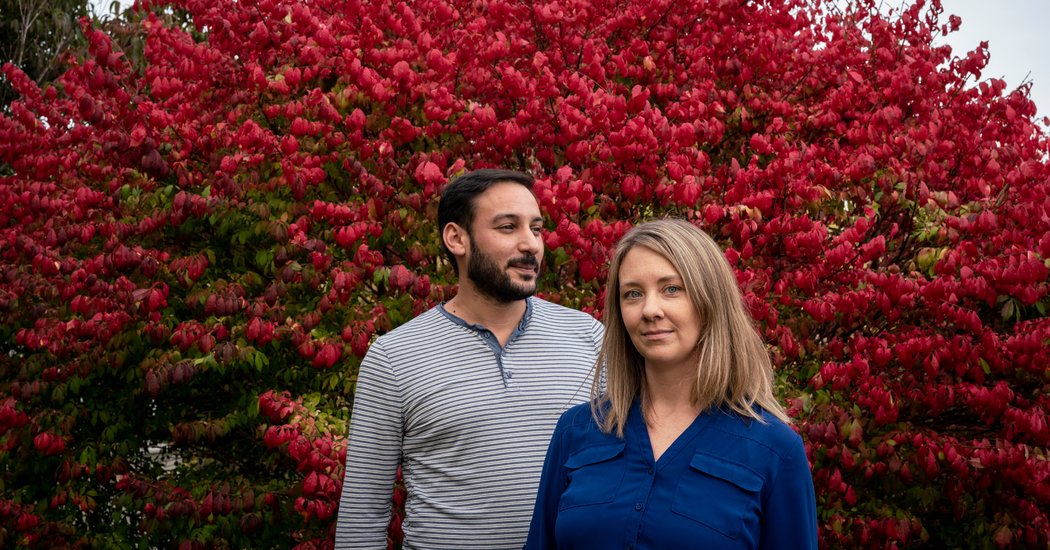 Most of the time, I have no idea what Mohammed is saying when I hear him on the phone with his family in Morocco.

But I feel a sense of comfort in his elevated tone and unfamiliar words often laced with laughter and strung together to form an Arabic conversation that my daughter and I try hard to imitate but our one-dimensional American palettes can’t seem to duplicate.

A part of me, of course, feels isolated from being lost in translation, but mostly, the closeness Mohammed has with his family reminds me a lot of our own connection.

From the first time I met Mohammed Ben Bouchta, who we call Mo, it was our chemistry that trumped all wondering of what we were and what we would be. Those darn relationship labels. We each had a failed “I do.” And since our decade-old divorces, we both had a handful of halfhearted attempts at love. I was also a single parent and quite content with the life my then-7-year-old daughter and I had built.

Our vows are unspoken but written in the undertones of our daily exchange. If your coffee isn’t strong enough today, I’ll pack the kids’ lunches. If your mind is heavier than your heart, get yourself to yoga. We don’t speak these words, but I suppose we’ve developed our own love language, a spiritual connection that tells the other, “I see you.”

And then there are days when we talk about the next phase of our life. When our children, a 2-year-old son we had together and my 10-year-old daughter from my previous marriage, are grown. We playfully argue about where we will retire. Sometimes I think the Spain tourism board is paying Mo to advertise. He feels the same when I talk about Hawaii. We verbalize our shared dream of running Airbnbs in places we cherish as our joint silver career. We’ll always come back to Maine in the nooks and crannies of our favorite times of year: Early summer, for example, is when our relationship found its hum.

If you’ve never ever read Shonda Rhimes’s “Year of Yes,” she talks about this “hum” that presents itself when she sits down to write “Grey’s Anatomy” or “Scandal” or whatever magic she’s creating. It’s like Michael Jordan in the final minutes of a nail-biter. Ms. Rhimes, like Mr. Jordan, gets in this zone and there’s no disturbing her creative force. I wish my writing days went like that. But I do believe it is the hum she speaks of that steadies our partnership, even if our day-to-day shuffle of work and parenting snags the last ounce of romance we were trying to save for those weary moments together after tucking in the children.

This is the part that I should tell you, Mo is not by-the-book romantic. Up until meeting him, I was all tied up in what romance should look like, given my longstanding fling with the Hallmark Channel. But in time, my swooning was not because of love notes, surprise appearances or charming one-liners. It was Mo’s encouragement of my hot-and-cold freelance life. His shared excitement for my solo travel plans. Our parenting and household responsibilities are balanced, not because we have to hash it out, but we just know when it’s our turn to be front and center. We sense the burnout before it happens. I can count on him. He can count on me. Support is the new romance.

This is the part where I should tell you Mo and I are not married and have no plans to marry. Spiritually, emotionally and in all ways but legally, we are there. In moments where I’m lacking confidence, I ask myself if this is enough. On those rare days, I know that the insecurity is coming from within. After all, I remember being married once and still, asked if it was enough.

Weddings have a place of beauty in my soul. They make me joyfully cry, but I don’t recall being that little girl who imagined her big day. My dreams evolved from owning a bakery (elementary school), playing in the WNBA (middle school), being the next Stuart Scott of sports journalism (high school). That’s not to say I wasn’t boy crazy along the way. I certainly wanted a forever, I just didn’t think about the dress I’d wear once or the shape of a diamond that would pop against my fair, Irish skin. No one was surprised when I married my now ex-husband at a Reno, Nev., chapel.

While on vacation a couple years ago, I met other travelers who were sharing how they met their spouse. One couple talked about their head-over-heels infatuation that led quickly to marriage. Another woman said she and her second husband didn’t marry until much later in life. And I broke my news of being a divorced woman in a forever relationship with no desire for a wedding. One man said, “Well marriage does come with tax breaks and you save money on health insurance.”

Of course, no one outright asks about our financial “agreement” if something were to happen to either of us. But I do know that a sense of security needs to come from a deeper place, one not rooted in dollar signs. In terms of big-picture concerns, it’s not our separate assets that knots my stomach, but the thought of being unable to communicate with Mo’s family if I don’t learn Arabic.

I should tell you, we have the same issues arise as any couple. I leave cupboard doors open; he leaves one teaspoon of ice cream in the container and returns it to the freezer. He gets obsessive about a single idea, while I have so many brainstorms that my focus trails. We are both self-employed (Mo started a powerwashing business earlier this year) and sometimes, after being under the same roof for long periods of time, day after day, we lack the personal space every person needs for growth.

Mo and I met each other at a time in our lives when we really liked ourselves and valued independence. The fear we had in the beginning was that those comforts would be taken away by the sheer logistics of sharing a life and raising a family. And some days it was very much lost. But we leaned on each other to make sure it wasn’t forgotten.

Recently, a substitute school nurse left me voicemail with a diabetes question. (My daughter has Type 1 diabetes.) In her message, she said “I also called your husband.” I laugh when people make the reference, only because there’s an assumption that committed people (especially with children) are spouses.

Labels have always been my pet peeve. Far too many divisions happen when we are grouped by a word. The word boyfriend (or girlfriend) makes me cringe. Partner is not much better. Mo told me one day not too long ago, “I found something to call you, since you don’t like girlfriend, boo, baby mama or partner.” He paused. “My future wife.” We laughed at the thought of telling people this for the next 50 years.

You should probably learn how to say that in Hawaiian then, I told him.

That has a nice ring to it.

Erinne Magee is a freelance journalist based in Portland, Maine. To read more of her work visit www.erinnemagee.com or follow on Twitter (www.twitter.com/erinnemagee).