Looking Beyond the Fashion Binary

BOSTON — The fashion department of the Museum of Fine Arts in Boston occupies a high-ceiling space filled with wooden bookshelves that resembles a classroom at a venerable college, and on a recent winter day the lesson was to expect the unexpected when it comes to clothes.

The museum’s curator of fashion arts, Michelle Finamore, opened the door to a storage area where some of the items were being kept for her coming show, “Gender Bending Fashion,” on view from March 21 to Aug. 25.

One mannequin was dressed in a 2012 Comme des Garçons blazer, printed with huge pink roses and combined with a black kilt beneath. It seemed to tell the tale of the show: Was the outfit for a man? A woman? Were those questions even relevant in 2019?

The concepts of gender-neutral, gender-fluid and unisex clothing have been some of fashion’s hottest trends over the past decade, attracting news attention, galvanizing activists and leading Hollywood stars of both sexes to experiment with gender-blurring outfits on red carpets.

From a museum perspective, the topic is so new that the very basics of a fashion show had to be rethought.

“We had to order all new mannequins,” Ms. Finamore said. “They’re more gender-neutral, and they’re all in a shade of gray.”

The exhibition comes at a time when gender issues are being discussed more.

“Thank goodness that in 2019, this show is happening,” said the Los Angeles-based designer Rad Hourani, who is credited with creating the first unisex and gender-neutral ready-to-wear collection, in 2007. “When I first started talking about this topic, I knew we didn’t need these categories.”

Mr. Hourani has more than a dozen items in the show, including chunky boots and elegant unisex couture trousers and jackets — all in sober black.

The more than 130 exhibition items feature all manner of garments, including sweaters and top hats, as well as drawings, photographs and other documentation of how we wear our gender, and how that’s changing. Designers represented include Rei Kawakubo, Jean Paul Gaultier and Alessandro Michele for Gucci. 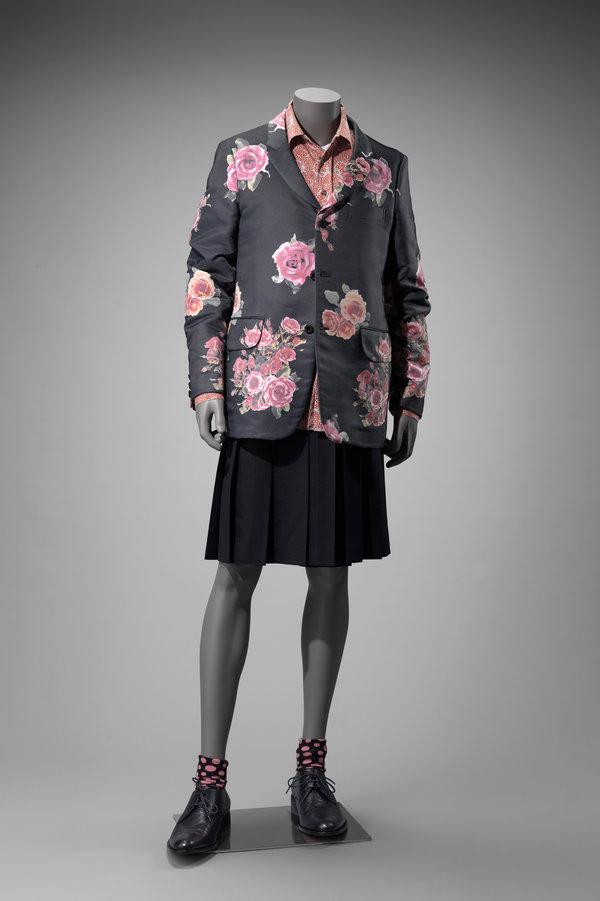 The show looks at recent developments in the field — of which there are many — and also at the earlier 20th-century roots of gender-fluid design, including Marlene Dietrich’s tuxedo and the so-called peacock revolution of the 1960s, when men’s fashion evolved from the traditionally muted grays and browns of an earlier time to bolder colors and striking designs.

“It’s such a timely topic,” said Ms. Finamore, who has been researching the subject for several years and was particularly inspired by developments in men’s wear. “There is a rethinking of what these gender binaries mean.”

She added, “What I love about it is that it allows me to kind of present the contemporary, but then look back in history and think about what preceded it.”

Though it pushes into new territory, “Gender Bending Fashion” is part of a widespread trend of art museums putting on fashion exhibitions, one that has grown quickly in the last decade.

The Costume Institute at the Metropolitan Museum of Art has led the way with wildly popular exhibitions like last year’s “Heavenly Bodies: Fashion and the Catholic Imagination” — which was the museum’s most popular show of all time, with 1.65 million visitors — but the trend is everywhere. The Philadelphia Museum of Art recently closed “Fabulous Fashion: From Dior’s New Look to Now,” and “Thierry Mugler: Couturissime” is on view until Sept. 8 at the Montreal Museum of Fine Arts.

Art museums put on these shows at least in part because they think visitors will flock to them and perhaps, while they’re on the premises, encounter the painting and sculpture that are the meat and potatoes at most such institutions.

But “Gender Bending Fashion” takes the idea of attracting new visitors and engaging them a step further, to such a degree that it actually changed the shape of the exhibition.

“We’re doing a lot of thinking about who our audiences are,” Matthew Teitelbaum, director of the M.F.A., said. “We want people to imagine that they belong here.”

To that end, Ms. Finamore reached out beyond the museum walls more than is the norm and held discussions with people who may have a stake in the show, including transgender groups and the queer fashion community. They posted a “call to action” on Instagram that got very inquisitive replies.

“People wanted to know more right away, especially about whether trans people were represented and what that means,” Ms. Finamore said. To make sure the museum was sensitive to the community’s concerns, she also hired a gender consultant to help vet the show’s language and concepts.

The exhibition has a sidebar of sorts called the Fashion and Gender Lab, which includes a library and a place for visitors to respond to the show. It will feature a digital album composed of photos and stories of 10 Boston-area locals who are gender-fluid in their dress; it may also appear on the museum’s website.

Younger voices were particularly sought. “We had such a great discussion with our Teen Arts Council,” Ms. Finamore said. “We listened to what resonated, and interestingly for them it was the history that really resonated, because they didn’t know anything about it previously.”

The opinions she received were in some cases pointed ones, like those from Anita Dolce Vita, the owner and creative director of the queer style blog dapperQ.

“When we talk queer style, we’re not talking about gay men creating binary clothing for women,” Ms. Dolce Vita said. “Queer style is not that — it’s a disruption of the whole system.”

She aired her views to Ms. Finamore and recommended the work of Stuzo Clothing, a Los Angeles-based company that makes “genderless” clothing.

Though Stuzo didn’t make it into the exhibition — the conversation came late in the planning — Ms. Dolce Vita is including them in a small fashion show she is staging March 15 as part of a preview event at the museum.

This level of outreach is fairly new for the M.F.A., which opened in 1876 and has always been known for a strong traditionalist streak, like its home city. “Boston has such a conservative reputation, especially fashion-wise,” Ms. Finamore said.

All the more reason to make an effort in a fresh direction. “Already, Michelle’s working groups and round tables have changed the ways we develop content,” Mr. Teitelbaum said. “It’s achieved a lot for us and it hasn’t even opened.”

But he noted that the outreach is beside the point unless the material coming on view is worthy of display, and meets the long-held standards of the institution.

“When I saw the objects, I thought they were unbelievably interesting and powerful works of art,” Mr. Teitelbaum said. “And if they’re not, we lose credibility.”

For his part, Mr. Hourani sees the show as progress, given the relatively recent explosion of gender-fluidity as a topic in wider society.

As he put it, “To have a revolution, you need an evolution.”