Looking at Where Chicago Works 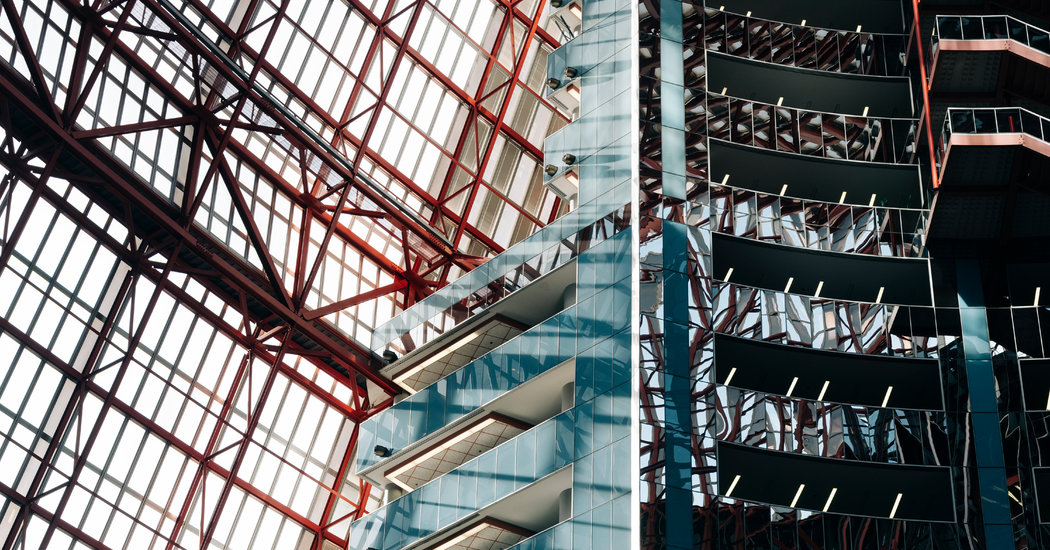 This article is part of our November Design special section, which focuses on style, function and form in the workplace.

Lee Bey stood under the rotunda at the James R. Thompson Center, 13 stories of mirror-glass balconies rising around him in tiers, and shiny elevators (now off-limits without official business) zipping up and down.

The idea of the center, which opened in 1985 at the corner of Clark and Randolph streets, was to make a new indoor civic space downtown, with state government offices supported by the retail outlets and a food court. You can get a marriage license here. You can also eat at Taco Bell. “It embodies the idea of transparent democracy,” he said. “You can see all the elements at work.”

Even the so-bad-they-are-good 1980s colors in the atrium have meaning: “It takes the elements of a traditional government building” — the dome, the flag — “and plays with them. The red, white and blue becomes a salmon and a teal.”

Mr. Bey, 54, a former Chicago Sun-Times architecture critic, photographer and author of a new book, “Southern Exposure: The Overlooked Architecture of Chicago’s South Side,” had planned an all-day tour of Chicago work spaces, some serving their original functions, others adapted to 21st-century uses. Where better to begin than in a building designed to put government dollars on display?

Several Illinois governors have wanted to sell the building, designed by Helmut Jahn and long plagued by maintenance and heating and cooling problems. But Mr. Bey thought that was the wrong move: “I would keep it and restore it,” he said. “It was built here for a reason,” with an L connection and adjacency to City Hall, a free interior public space as well as the plaza with its eye-catching Jean Dubuffet sculpture out front. “It is a metaphor for democracy; it wants you to walk around it and check it out.”

After the Thompson Center, Mr. Bey took a blocklong shortcut through City Hall and turned left, walking to the Reliance Building at Washington and State streets, one of the Loop’s original skyscrapers, designed by Burnham and Root with slim, delicate-looking white terra-cotta cladding. “When this building was designed in the 1890s, electric light was a rare thing,” Mr. Bey said. The windows were made “really big to let natural light in.” The 14-story building’s original tenants, doctors, dentists and watchmakers, took full advantage.

“As typical with Chicago architecture, there’s a function at the base of everything. So the modernists from Europe come over, they are pushing for more glass, less wall,” but, Mr. Bey said, they realize “these guys have done it already.”

And the modernists did come, and stayed. Ludwig Mies van der Rohe emigrated to Chicago in 1937, where he was given a number of important commissions, including the Chicago Federal Center, completed in 1974, a few blocks south of the Reliance Building on Dearborn. The Dirksen U.S. Courthouse occupies one coffee-colored Mies building in the center, federal offices a second and the third, a one-story glass-and-steel pavilion, is the Loop branch of the United States Postal Service.

There’s no better place to admire the precision of Mies’s grids than from within the post office, with its Eames Tandem Sling seating, custom stainless mail tables and bookmatched black walnut paneling. “One of the most everyday and ordinary things you can do is buy stamps, mail a letter, drop a package off,” Mr. Bey said. “This puts nobility behind the act.”

Across from the rear of the post office on Clark Street, Mr. Bey stopped in at the Central Standard Building at 231 South LaSalle, a 1924 building by Graham, Anderson, Probst & White that is now the headquarters of Wintrust Bank. Up an escalator, a vast neoclassical banking hall stretches the length of the block, wrapped by a mural depicting ancient civilizations and quotations about financial probity. “This is our Wall Street,” Mr. Bey said of the building and its twin, the Federal Reserve Bank across LaSalle. “The architecture connotes stability, permanence, beauty.”

Mr. Bey next headed south, by taxi, to the edge of Grant Park. There he encountered a different type of grandeur — the groovy kind — at the 1972 Ebony/Jet building on South Michigan Avenue, once the headquarters for Johnson Publishing and the first downtown high-rise designed by an African-American architect, John Moutoussamy.

The 11-story building is “buttoned-down,” said Mr. Bey, with tan granite-faced balconies overlooking the park. Inside, however, was a different story: “distinctly black spaces with a fearless mixture of colors and textures” designed by Arthur Elrod and William Raiser. The radical interiors are mostly gone now, like the lime, orange and swirling laminate Ebony Test Kitchen, which was claimed by the Museum of Food and Drink. But other striking elements remain. Mr. Bey called the brass front door hardware, which twists like a Möbius strip, “the Wakanda door handle,” after “Black Panther’s” stunning Afro-futurist sets.

But Chicago wasn’t built on office work alone. The last two stops on our tour are on the far South Side where, as Mr. Bey said, “we are closer to Indiana than we are to Downtown Chicago.” A 230-foot-tall wind turbine marks the 2015 Method soap factory, a LEED-platinum plant by the sustainable design pioneers William McDonough + Partners. An open wetland with green and purple prairie plants sets off the boxy concrete building, striped with rainbow banners and topped with a 75,000-square-foot greenhouse operated by Gotham Greens.

“This was a former brownfield, the site of the Ryerson Steel factory,” Mr. Bey said. “This land is returning to its industrial roots.” There are once again blue-collar jobs, in a largely blue-collar area, he said, “part of a first wave of industry coming back.”

Our final destination is the long-closed Pullman Clock Tower and Administration Building, which looms over its low-lying neighborhood.

Historic Pullman was founded in 1880 as a model workers’ village by George Pullman, founder of the Pullman Palace Car Company, which manufactured luxury railroad cars.

The district was declared a National Monument in 2015, recognizing its historic design by the architect Solon Spencer Beman and the landscape architect Nathan F. Barrett and its place in labor history.

In the administration building, extensively damaged by arson in 1998 and rebuilt, we see the factory’s iron bell, crumpled like tinfoil by the heat of the flames. Tracks running crosswise through the building would have carried half-built cars inside where they could be completed.

Generous brick houses once set aside for the bosses front the factory grounds on 111th Street, with shady rows of smaller workers’ housing stretching away for blocks. “Congrats on the book, Mr. Bey!” shouts a woman, waving from across the street, while a man in a pickup pulls over to chat. Mr. Bey has lived in one of those rowhouses for 10 years and, on a sidewalk outside the clock tower, it is clear that he is, after a long day touring, home.