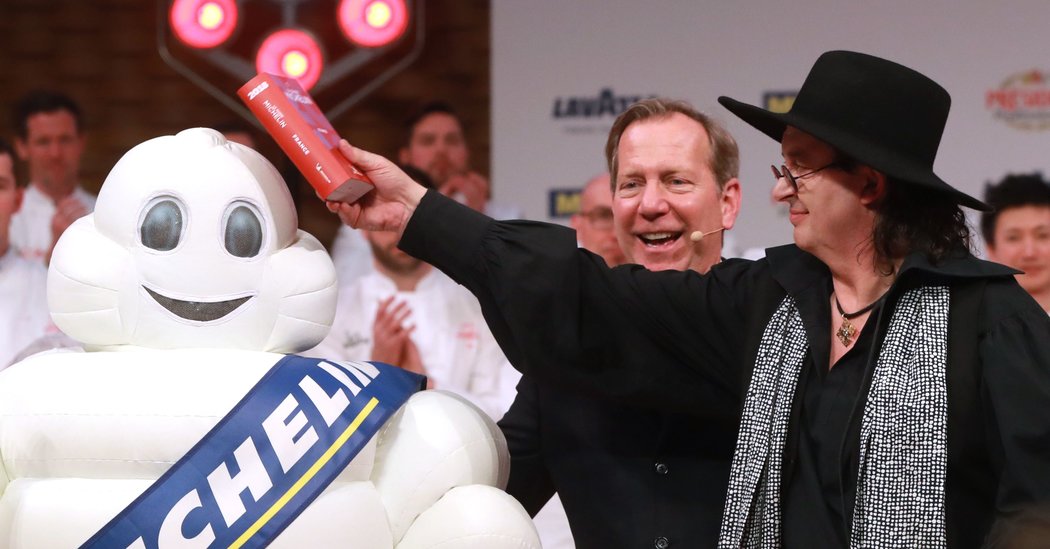 PARIS — A celebrity chef has declared that he is suing France’s most revered culinary arbiter, the Michelin Guide, after its reviewers stripped his restaurant of its third star.

The dispute between the chef, Marc Veyrat, and the guide started in January, when La Maison des Bois, Mr. Veyrat’s restaurant in the Haute-Savoie area of France, which borders Switzerland and Italy, was given a two-star rating, down from three stars the previous year.

“I’ve been dishonored,” the chef told the broadcaster Franceinfo this week. “My team, I saw them cry.”

Mr. Veyrat, 69, is now in open conflict with the Michelin Guide, arguing that it lacks transparency and casting doubt upon its reviewing methods. He has even suggested that the guide’s inspectors had never visited his restaurant.

This summer, Mr. Veyrat — famous for his plant-based cuisine and for wearing a black shepherd’s hat — asked to be removed from the guide altogether. And on Monday, he said that he was suing the guide to “shed light on the exact reasons” for the downgrading, according to his lawyer.

In an interview this summer with Le Point, Mr. Veyrat acknowledged that the downgrading had not affected his business — revenue was up 10 percent from last year, he said — and that his anger stemmed mostly from his wounded pride.

“I feel like my parents have died a second time,” he told the magazine. “Can you imagine the shame I feel: I am the only chef in history to get a third star and then to lose it the next year.”

Mr. Veyrat, through his lawyer, declined an interview request for this article.

The decisions of the red-covered Michelin Guide are closely watched in France. Every year, the 20 to 30 restaurants that get its top accolade, a three-star rating, are scrutinized to see which chefs are on the rise and which are losing their shine. This year, 27 restaurants were awarded three stars, and 84 were awarded two.

Michelin stars bring prestige but also intense pressure to chefs, some of whom have committed suicide. In recent years, some chefs have even asked for their stars to be removed, citing the psychological or financial burden of maintaining their rating.

Mr. Veyrat, however, felt very strongly about keeping his. He called the guide’s decision to strip it away “a serious affront.”

Mr. Veyrat — who hails from the Savoie region in the French Alps, which is famous for fragrant cheeses like Reblochon or Beaufort — felt particularly insulted that, in his telling, a Michelin inspector who ordered a soufflé had mistaken a saffron-infused emulsion for Cheddar, “because it was yellow.”

“And you call that knowing the terroir!” he said. “That’s just crazy.”

The Michelin Guide said in a statement on Monday that Mr. Veyrat’s accusations were baseless.

“We understand Mr. Veyrat’s disappointment, and no one is disputing his talent, although we regret his unreasonable persistence in accusing and noisily communicating,” the Michelin Guide said, adding that its “first duty” was to “inform the consumers.”

“We will carefully study his demands and respond calmly,” the group said.

The 2019 edition of the guide gives no clear hint of what prompted the downgrade at La Maison des Bois, which has stunning views of the surrounding mountains and pine forests. The review praises Mr. Veyrat for being “true to his reputation” and calls his cuisine a “pastoral symphony” that mixes “woodland fragrances and Alpine herbs.”

Emmanuel Ravanas, a lawyer for Mr. Veyrat, said on Tuesday that the immediate goal of the civil suit was to compel the guide to produce documents, like restaurant bills and reviewer notes, that would help explain the demotion.

“If the restaurant was downgraded from three to two stars because the reviewers thought they were eating Cheddar when there wasn’t any, then that is extremely serious,” Mr. Ravanas said by telephone. “We don’t know on what criteria he was evaluated, with what appear to be very big methodological errors that the Michelin is refusing to communicate about.”

Gwendal Poullennec, the international head of the Michelin Guides, said this year in an interview with Le Monde that officials from the guide had met with Mr. Veyrat to explain the decision to downgrade the restaurant. But Mr. Poullennec added that the guide could not take the chef out of it. (He also denied the Cheddar-related accusations.)

“The stars from the Michelin guide do not belong to the chefs, it is not up to them to give them up,” Mr. Poullennec said, adding that the guide’s reviewers were highly qualified professionals and that Mr. Veyrat had questioned their methods only after he lost his third star, not when he was awarded three the previous year.

“Accepting a promotion and rejecting a demotion, I’m sorry, but that’s bad faith,” he said.

Mr. Ravanas, Mr. Veyrat’s lawyer, said a court hearing had been set for Nov. 27. If Mr. Veyrat’s legal team is able to obtain documentation that proves a mistake, they will ask the court to force the Michelin Guide to remove its entry for La Maison des Bois, Mr. Ravanas said.