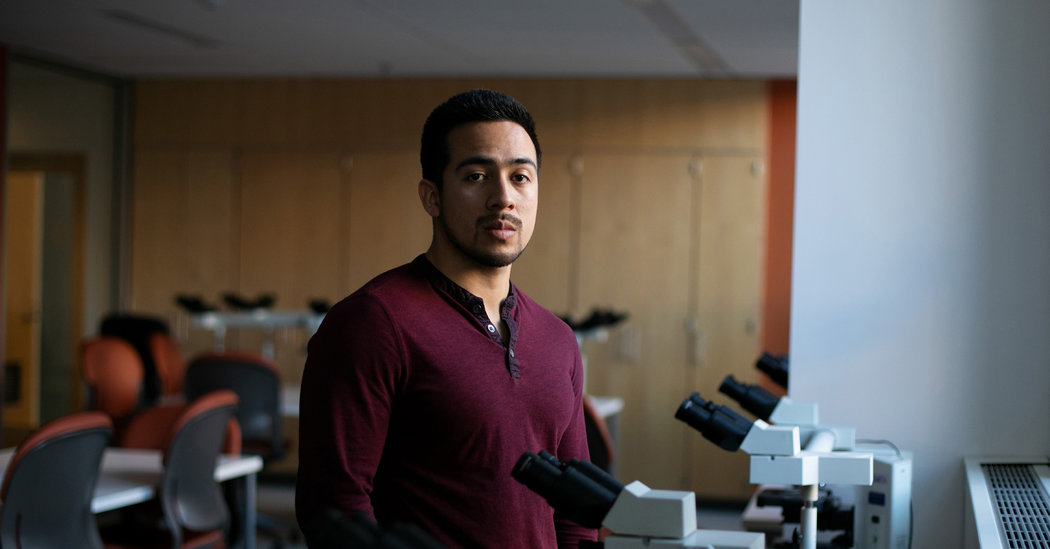 David Velasquez learned his first clinical lesson early on: The health care system wasn’t made to care for people like him. Mr. Velasquez, 24, never had a primary care physician, because his parents, immigrants from Nicaragua, couldn’t afford the bills. When he was 12, his undocumented godmother died of cancer, having avoided hospitals until it was too late. Mr. Velasquez, the only college-bound member of his family, knew he needed to become a doctor.

When he registered for the Medical College Admission Test, or MCAT, his junior year, he called the Princeton Review to ask for a discount on a $1,200 preparation package. He felt that, coming from a poor Los Angeles community without connections, he would need an especially strong test score to compete for admission.

“I thought maybe they’d hear I was desperate and put me on a payment plan,” Mr. Velasquez said. The company refused his pleas for a discount, so he worked overtime to scrounge up the money. After purchasing the package, he checked his bank account to see what remained: $4.80.

American medical schools are the training grounds for a white-collar, high-income industry, but they select their students from predominantly high-income, and typically white, households. Ten years ago, a national study found that over 75 percent of medical school students came from the top 40 percent of family income in the United States, representing an annual income above $75,000. A study last year from the Association of American Medical Colleges re-examined medical school demographics and found that the numbers had barely budged. Between 1988 and 2017, more than three-quarters of American medical school students came from affluent households.

Students from low-income families who choose to apply to medical school find the path lined with financial obstacles. The application phase entails MCAT registration ($315) and preparation, application fees ($170 for the first school and $40 for each additional one), travel and attire for interviews (on average more than $200 per school). After enrollment, students are expected to purchase equipment and study aids. Each year brings new certification tests, with registration fees running upward of $600.

Aspiring doctors know that tuition is costly; the median educational debt held by medical school graduates in 2018 was $200,000, up 4 percent from the previous year. But less advertised are all the hidden costs of a medical education.

Shawn Johnson was born just outside Stockton, Calif., but he moved around growing up, settling wherever his truck-driver father found work. He enrolled at a commuter college in Oregon, unsure what he wanted to study. When his best friend became ill with Hodgkin lymphoma, he began to wonder if he could apply his scientific aptitude to cancer research. A teacher encouraged him to apply for a summer research internship at Harvard. Photos of the campus “looked like the White House,” he said. When he got the email notifying him of his acceptance, sitting in the back row of class, he “flipped out.”

“I called my dad and he was like, ‘Do they have black people at Harvard?’” Mr. Johnson said. “For a kid like me, Harvard’s like a movie.”

His first time buying a suit was for medical school interviews. A janitor in a hospital hallway taught him how to tie his tie. But he didn’t realize that in getting accepted he had cleared only his first hurdle.

As soon as Mr. Johnson began medical school classes, the costs began to pile up. There was an itemized list of equipment he had to buy, including a stethoscope and ophthalmoscope, totaling nearly $1,000. There were study-aid subscriptions that were considered essential: the test prep site UWorld ($499), the question bank SketchyMedical ($200), the exam review book First Aid ($40). Then the test registrations: $630 for the United States Medical Licensing Exam Step 1 (“the boards”), $1,290 for Step 2 Clinical Skills, $630 for Step 2 Clinical Knowledge. He watched his classmates whip out their credit cards “like they were ordering something for $5 on eBay.”

“You have to decide, Do you use your loans for a study aid or for a rainy-day fund in case someone at home gets sick?” Mr. Johnson said. “I haven’t had dental insurance in two years. When tuna is on sale for 80 cents a can, I go buy 30 at CVS.”

Mr. Johnson worked at a Harvard cancer lab just before starting medical school. He sublet his apartment and slept on the medical school campus for several months so he could send his parents the money for a down payment on their home. He had a complication from a knee surgery but delayed visiting the hospital for weeks. The nurses were dismayed to see that a medical student had put off seeking treatment, as he struggled to explain that he could barely cover the bill.

Sarah Burns, a third-year student at Ohio State University College of Medicine, said the psychological stress of her debt weighed on her constantly, adding to the pressure of exams and clinical rotations. When she saw that the fee for the Step 2 C.S. exam was more than $1,200, she “started hyperventilating,” aware that she would have to lean on her parents for assistance, or she would be unable to pay her rent. In addition to registration, she would have to pay for travel to one of the five cities that administers the test.

America’s medical certification process is managed by the Federation of State Medical Boards and the National Board of Medical Examiners, a nonprofit organization. Its Step 1 and Step 2 exams are mandatory for anyone who wants to be a doctor. A 2019 analysis of the N.B.M.E.’s tax records conducted by Dr. J. Bryan Carmody, at Eastern Virginia Medical School, showed that the program revenue has more than tripled in the last two decades, which the organization attributes to its growth and diversification in services. Some of that revenue is coming from students and schools purchasing pricey practice assessments. In that time, the organization’s executive compensation has also markedly increased.

The stress of the certification exams isn’t just financial: The tests are viewed as make-or-break for a medical career. A 2017 study by medical school researchers at New York University and the University of Michigan showed that in the month leading up to Step 1, the average medical student studies 11 hours a day.

That anxiety serves as fuel for the lucrative test preparation engine. “The more anxious you get, the more you’re inclined to panic and buy a product, thinking it’ll make the difference studying for a high stakes exam,” said Amanda Tomlinson, a third-year medical student at the Icahn School of Medicine at Mount Sinai. And the options for panic purchases — flashcard services, private tutoring — are endless.

For some students, the pressure of medical school expenses becomes a limiting factor as they survey their professional options. A well-paying field like plastic surgery begins to look more appealing, while lower-paying jobs in family medicine lose their luster. All the while, many students feel the pull to return and serve the people who raised them.

“I want to show my community that it’s possible to be a brown face in a white coat,” said Jose Calderon, a second-year medical student at the University of Vermont’s Larner College of Medicine, who grew up without health insurance. “That’s empowering to the kid considering medicine in the slums of Houston or South Central Los Angeles.”

Some medical school students said they are taught to view their mounting academic expenses and costs of living through the distorting prism of debt. It is already assumed that they will take out loans to cover tuition, so an extra $500 here or there is shrugged off.

“There’s this idea that because we’ll all be doctors one day, the loans don’t matter and it’ll all even out,” Mr. Johnson said. “But that doesn’t account for day-to-day expenses now, like if my mom texts me asking for help.”

Ms. Tomlinson said that with every expense she takes on now, such as a $20 dinner out, she calculates what she will have to pay off in 10 years, at 7 percent interest. She struggles to make rent on her dorm room at Mount Sinai, which is more than her parents pay for a family house in Oklahoma City.

Randall Tassone, a medical student at Harvard, was raised in a low-income household in rural Pennsylvania. Now surrounded by wealthier classmates, many of them the children of doctors, Mr. Tassone has come to understand money as something intrinsic to medical school culture, structuring social as well as academic life. Earlier this year he walked past a classroom poster advertising a service trip; it included a student testimonial: “It was nice to feel like we did something to help the poor community.”

“It was identifying the poor as outsiders who aren’t part of our community,” Mr. Tassone said. It made him realize, he said, “I’ve been invited into this institution that favors rich people.”

Mr. Johnson said he experienced almost daily reminders of his socioeconomic status. A professor recently asked students, as an icebreaker, to describe their favorite family vacation spot. Mr. Johnson began to sweat, racking his brain for an answer before awkwardly offering the truth: His family had never taken a vacation.

That top medical schools seem to favor the rich is especially disturbing to low-income students because they know that their diverse experiences and perspectives are an asset, not a liability. A 2018 study showed that black patients have better health outcomes when treated by black doctors. Mr. Johnson said that emergency room patients have told him they feel more comfortable having a doctor who is African-American and from Stockton, someone who, like them, struggles to afford his medication.

When he graduates from medical school, Mr. Velasquez plans to work in an emergency room where he can treat patients who are homeless, undocumented and “the poorest of the poor.” He wants to treat patients who look like his family, he said. But already he has learned that the dream comes at a cost.