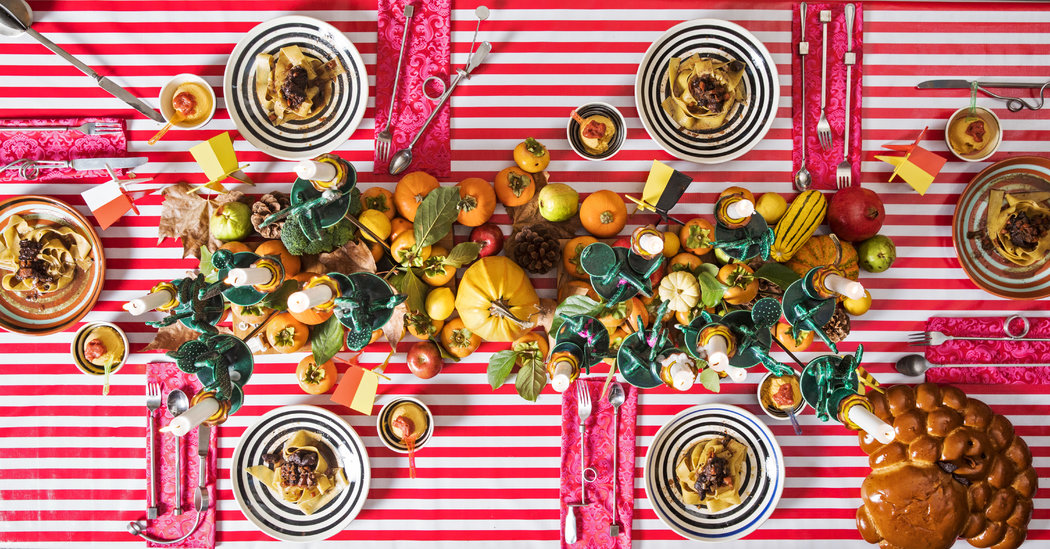 Color, form and playful provocation are Peter Shire’s visual language — even at the Thanksgiving table. The painter, sculptor, ceramist and furniture designer was one of the founding members of the Memphis design group, and his work is in museums around the world. Every year, he hosts 30 people in his Echo X Park Artist Studio space, adding on to the table that his father, Henry, built in 1950, which has been used for every family Thanksgiving since.

He and his wife, Donna Shire, explore cultural fantasies of Southern California, starting with the table setting. “Thanksgiving is a very odd holiday that has a certain flatness to it, so the table needs something spectacular, a feature, which in this case are the tall cact-o-labras,” he said of the cactus-shaped candlesticks he created. He also made the graphic striped plates, mugs and gelato bowls, the Alexander Calder-inspired flatware and other sculptural elements on the table, while the Mexican oilcloth covering the table is from his brother’s store, Wacko, also in Los Angeles.

This year, Mr. Shire, 71, and his friend, the chef Leo Bulgarini of Bulgarini Gelato, were thinking about how the best part of a meal is dragging bread through all the sauces left on the plate. They decided to bypass traditional dishes and serve bread with a variety of sauces — in this case, Mr. Shire said, “an outrageous turkey-shaped bread,” or Challurkey, from Bibi’s Bakery & Cafe.

Also on the menu: pappardelle with wild boar ragù, cranberry sorbet and pumpkin pie gelato, which, he said, “I thought was a very funny idea of what Thanksgiving could be in Southern California.” (Over the years, the Shires have served teriyaki turkey, poached turkey “sushi,” turkey from a South Los Angeles barbecue spot and turkey tacos.)

Then there’s the conversation. “Thanksgiving is interesting in our home,” said Mr. Shire, “because we also question the origins and motivations of the early settlers of America, as to what really happened.” And on Dec. 8, only 10 days after the tables are cleared at his studio, Mr. Shire will host his 49th annual holiday open house there, for which he’ll cook for the hundreds of people who line up.

When Guna Raj’s children were growing up in Dallas in the 2000s, they wanted traditional Thanksgiving food — but Dr. Raj, a physician born in Bangalore, and her husband don’t eat meat. So she ordered turkey, ham and cornbread from Boston Market and added a few Indian dishes for the adults.

As her kids got older, they wanted Indian food, too. And so for the last 12 years that she’s hosted Thanksgiving for more than 20 family members, filling her dining room and breakfast table, as well as seats pulled up around her kitchen island and tables put together in the living and family rooms.

Dr. Raj, 65, has cooked vegetable curries and biryani, raita, spiced carrot and sprouted mung bean salads and naan or chapati, supplemented with a sweet potato dish with marshmallow, she said, “to add Thanksgiving flavor.” In addition to the apple, pumpkin and pecan pies that grew out of a fiercely fought baking contest for the young cousins, Dr. Raj makes vermicelli kheer and orders holige, a South Indian pastry filled with a jaggery-sweetened purée of pigeon peas, from a woman in Toronto.

She sets the table with her Noritake wedding china and her collection of contemporary pottery, but the table itself is the showpiece: Shipped to Chicago as a wedding present in 1983, it is inlaid with semiprecious stones by descendants of the artisans who built the Taj Mahal.

After the meal, the families break up into teams (men vs. women) to play Taboo and let the accusations of cheating fly. Thanksgiving, she said, connects her to the huge holiday feasts of her childhood: “It makes me feel like I am carrying on my parents’ tradition here and helping my children to stay connected with the rest of the family.”

“We need real in our lives right now, and Thanksgiving is still one of the real things that people do,” said Kerry Moody, a designer and stylist. “It’s an incredible, powerful thing to have in this country, to be together for that moment.”

For Mr. Moody, 58, who works for Decorations Lucullus, an interior-design firm that made its name with culinary-antiques stores (now closed), it’s also the last bit of time he has to, say, get up at 2 a.m. and bake dinner rolls before he devotes himself to clients for the Christmas season.

Growing up in a French-speaking Creole family in Louisiana, the Thanksgiving meal seemed endless, segueing from gumbo to roast duck to turkey with oyster, shrimp and crab meat stuffing, to stewed wild rabbit, to stuffed mirliton squash, to redfish.

When Mr. Moody invites as many friends and family as can squeeze into his four-room cottage in the Bywater neighborhood of New Orleans, including the culinary historian Jessica B. Harris, he makes sure to honor his family’s traditions, starting with the gumbo. (Mr. Moody’s dinner rolls are his own tradition. Now, he said, neighbors call him the week before Thanksgiving to see if he’s making them; he bakes extra trays to give away.) He sets his table with French antiques, including 1790s silverware, belle époque damask napkins and 19th-century faience plates.

As the meal unfolds, so too does the conversation — one of his favorite things about the day. “I think it’s one of the best holidays that brings family, especially American families, to the table,” he said. “And the table is so powerful: It’s where people let their guards down. Sometimes they let them down a little too much, but I love that.”

“I’m not 100 percent a traditional person when it comes to holidays, but I definitely take advantage of the day by spending it with the people I love,” said Agustin Hernandez. The 30-year-old photographer and his roommate fill their apartment with up to a dozen friends and ask them how they’d like to see the evening unfold.

“There’s a party in every room,” he said: a movie in one, eating in another, dancing. “Karaoke’s a thing,” he added. “It gets a little fun that way.”

Whether it’s at his house or a friend’s, Hernandez always cooks turkey and serves it with mole sauce and rice, drawing on his family’s tradition of rounding out the spread of turkey, stuffing and mashed potatoes with a signature Mexican dish, such as tamales, pozole or the mole. “I always have to call my mom for the recipe,” he said. “I can never perfect it like she does.”

And like mothers across the country, Ms. Hernandez always has one last pointer to add, he said: “She always leaves me voice mails to remind me of things I forgot.”

Nothing on the Rawas family’s table came from their home in Damascus, Syria. “We were barely able to take a suitcase, in the hope we’d go back in a few months,” said Batool Rawoas, now a 21-year-old college student, of their departure for relatives’ homes in 2012, which led to almost three years living as refugees in Jordan after the border closed. “We didn’t think we’d end up here.”

In 2015, they became six of the 1,682 Syrian refugees admitted to the United States, out of an estimated 11 million Syrians who had been displaced. Though they had been middle class in Damascus, they struggled to find work in America. While Mohammed Aref Rawas, Ms. Rawoas’s father, worked in factories and drove an Uber, he and his wife, Rawaa Kasedah, began cooking the dishes they were homesick for, like pita bread and mandi, or smoked rice. (The different spelling of Ms. Rawoas’s name is the result of a paperwork error during emigration.)

After the couple received an increasing number of requests from other Muslim families they’d met, Ms. Rawoas helped her parents set up the catering company Old Damascus Fare. Last year, with support from the La Cocina, a food business incubator program in the Bay Area, they opened a stand in the student union at the University of California, Berkeley.

Ms. Rawoas — pictured above right at a Refugee Food Festival event in San Francisco last year with members of her family, from left, Bayan al Rawas, Mr. Rawas, Mohamad Rawoas and Rawaa Kasedah — is the family’s translator as well as a partner in and the general manager of the restaurant. She said that the holiday reminds her of Eid al-Fitr, a three-day celebration following the Ramadan fast. Their first Thanksgiving was spent with an American Muslim family, trying traditional American dishes. Last year, Ms. Kasedah bought her first halal turkey and stuffed it with spiced rice and vegetables.

When asked how she felt about the tradition of saying grace before the Thanksgiving meal, Ms. Rawoas said that it came naturally: “That’s an essential part of our prayer. We do it five times a day and before we eat anything. So with Thanksgiving culture and us, we’re doing this most of the time anyway.”

For Abbye Churchill, 35, an artist and writer who works with food, textiles and plants, the eye eats first. “I think of beauty and food as an entire aesthetic experience,” she explained. “I’ll think of the menu, and then I’ll build the backdrop into the menu. But when I’m thinking about the menu, I’m thinking about color.”

This year’s color-and-texture-rich menu includes brussels sprouts and maitake mushrooms with black garlic-date vinaigrette; roasted carnival squash and radicchio with feta, mint, pomegranate and a vinaigrette made with chestnut honey, rhubarb and Sichuan peppercorns; salad with apple, endive and pansies; five-day Danish rye bread that she made with her fiancé, Erikk Geannikis, who produces the philosophy, politics and culture podcast The Relentless Picnic; and, to drink, a colorful CBD-laced punch.

No turkey? “I’m not anti-bird,” she explained. “I just don’t actually like Thanksgiving food.” When pushed, Ms. Churchill said, “I don’t mind doing a turkey, but it seems like a whole lot of hullabaloo. Not my jam!”

Designing things for the table is her jam (though she makes jam, too). She made some of the ceramics she uses, and wove the place mats from cotton handspun from dead-stock textile waste that she dyed using indigo and cochineal from Oaxaca and flowers from Maine.

The meal itself has an untraditional arc. “I like to have a rolling food situation so it’s like, ‘And then this dish, and then this dish!’ ” said Ms. Churchill. She also sets up “grazing tables” of nuts, olives and pickled garlic scapes around the apartment to allow for extended snacking, and talking, before and after the meal.

“One of the things I don’t like about Thanksgiving is the drama of the meal itself,” she said. “The point of having people over is to sit around and talk. You don’t get that much leisure time, especially in New York.”