How Jell-O Molds Claimed Their Spot on the American Table 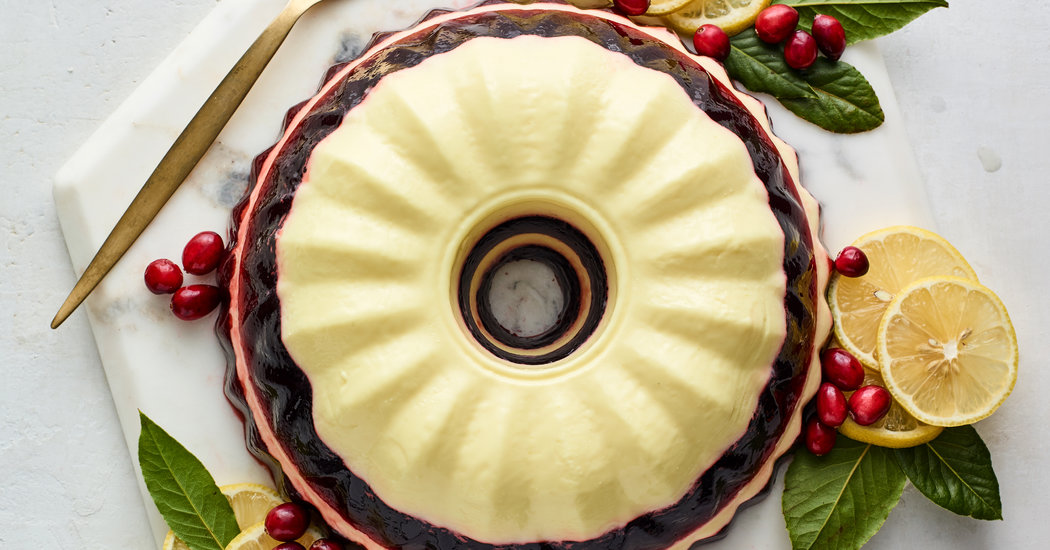 Here is the story of my first, traumatic encounter with a Jell-O mold.

I ate Jell-O, of course — it was the first thing I learned to “cook,” in a dedicated set of Tupperware bowls. Its bright primary colors sparkled in glass coupes at every coffee shop in the city, and it had a taste of forbidden fruit, like melted hard candies. With a crown of equally forbidden whipped topping, it was considered a luxurious dessert.

But in my 14th year, the Jell-O paradigm shifted. My pack of friends was invited to dinner at the home of another friend; her mother, a transplanted Southerner, had already set the table with the first course. All of us New Yorkers stopped dead, goggling at plates that held individual molds of red Jell-O topped with a dab of something too yellow to be Cool Whip.

Someone blurted out, “If that’s mayonnaise, I’ll choke!” Naturally, this was greeted with shrieks of laughter. With ice water in her voice, this heroic woman simply said, “You can scrape it off if you don’t like it.”

I remember eating the rest of the meal in silence, cheeks burning with shame. Still, I wondered: Why was dessert served as an appetizer? Why was it topped with sandwich spread?

I had stumbled into the eternal conundrum of Jell-O: Is it a salad, a dessert or somehow both?

This time of year, many Americans have Jell-O molds on their minds. Jell-O consumption has gone down steadily since its peak in the mid-20th century, but many cooks bring back a favorite dish in this category for the holiday table. (Others satisfy themselves with a can of wiggly gelled cranberry sauce, and some serve both.) Whether it is called a Jell-O mold or a congealed salad, or has a given name like Golden Glow Salad, Celery Nut Circle or Strawberry Pretzel Surprise, it is usually sweet and tangy, sometimes creamy or salty, occasionally crunchy and briny.

But even those who love them are not always sure what they are.

“It goes on the buffet with the turkey and the ham, and it stays through the pies,” said Jeffrey Cornelius Zweben, a lawyer in Atlanta. He ignores Jell-O for most of the year, but starts stockpiling his favorite, the hard-to-find black cherry flavor, in September. For his signature Thanksgiving mold, he combines it with whole cranberries, crushed pineapple, cream cheese, whipped cream and — of course — a tablespoon of mayonnaise.

“It goes with everything,” he said firmly. “Jell-O is a processed joy.”

But do all Jell-O molds evoke joy? A spin through The New York Times Food library turned up a Mormon community cookbook recipe with lemon Jell-O, canned tuna, canned condensed chicken-and-rice soup, salad dressing, whipped cream, celery, peas and walnuts; a 7Up Cheese Aspic with lime Jell-O, 7Up soda, grated onion, diced Velveeta, celery and olives; and a corned beef loaf with lemon Jell-O, for which there are no words.

It took more than 20 years for me to exorcise and explain that first Jell-O mold encounter. The process began at luncheon at the Woman’s Club in Richmond, Va., where each guest received an exquisite plate: a half-moon of red Jell-O surrounded by cheese straws, cream cheese-stuffed celery sticks and a scoop of chicken salad.

I loved this meal, but I still didn’t understand it.

I tried. I learned that gelatin salads flow from the traditions of Edwardian vegetable aspics; of ancient, naturally gelled bone broths; of European classics like jellied meats and Bavarian cream and blancmange. I learned that the United States is far from alone in its dedication to jellies: grass jelly in China, kanten in Japan and gulaman in the Philippines are all made from agar, a bouncy gelling agent extracted from algae.

I learned that sweet, cheap, instant Jell-O was a dessert that truly reflected the space age, that its artificial qualities were part of its appeal.

I learned that women who were nudged back into home kitchens after World War II brought their pent-up ambition and creativity to the new phenomenon of “entertaining,” and that a molded salad could be seen as a metaphor for how women of the era were supposed to be: well-contained, bright, pretty and resilient.

“A salad at last in control of itself,” is how the historian Laura Shapiro described Jell-O molds in “Perfection Salad,” her book about American cooking at the turn of the 20th-century. It is titled after a durably popular concoction of lemon Jell-O with shredded cabbage, carrots, celery, peppers and pimento-stuffed olives. (The recipe won third place and a sewing machine in a 1904 contest held by the Knox Gelatine company, and was published in its booklet “Dainty Desserts for Dainty People” in 1915.)

It is easy to poke fun at Jell-O molds like these; in fact, there are blogs and Twitter feeds dedicated to surfacing them. It is not as easy to understand how they fit into Thanksgiving traditions, as they certainly do, especially in the South, Midwest and Utah (where Jell-O is the official state snack).

Jellies have a long history on American tables, going back at least to Thomas Jefferson’s diplomatic mission to France, where he lived from 1784 to 1789 and wrote down a recipe for nutmeg- and lemon-spiked “wine jelly” on what appears to be an 18th-century version of a cocktail napkin.

When the dish was served at Monticello, however, it is certain that the actual work of boiling and scraping a calf’s foot to make gelatin, clarifying it with egg whites, seasoning it with a fortified wine, sugar, lemon and nutmeg, and making sure it set evenly was overseen by James Hemings, the enslaved chef who had received formal French culinary training during Jefferson’s time abroad.

The historian Toni Tipton-Martin said that jellies and aspics connoted wealth and luxury because they were so hard to make. “It showed not only that you had people working for you,” she said, “but you had extra hands to make food that was completely frivolous.”

For less privileged Americans, meals were entirely practical, and repetitive at best. Ms. Tipton-Martin said the root vegetables and starches that we associate with Thanksgiving — stale bread, potatoes, winter squash — made up the daily diet of many people from November to March until the Industrial Revolution.

The need for preserves, relishes and chutneys to relieve the monotony (and to provide nutrition) was acute. Thanksgiving became an occasion to break into jars that held the previous summer’s harvest, most of them with flavors both briny and sweet: pickled carrots and green tomatoes, piccalilli and pear butter, pickled blackberries and corn relish. Tart jellies made from pectin-rich fruit, like quince and cranberries, were commonly served with meat.

After 1845, when Peter Cooper patented the first powdered unflavored gelatin, the history of Jell-O races forward. Savory molds like cucumber mousse, tomato aspic and glacé fish mold were just as popular as sweet ones until the presweetened Jell-O brand cornered the market soon after being introduced at the turn of the 20th century.

According to the historian Anne Mendelson, the product’s convenience was so invaluable to women of the early 20th century that they simply plugged sweet lime, lemon and cherry Jell-O into savory recipes that were once seasoned with fresh lemon juice, meat stock and tomato juice.

“That’s how we ended up with these sweet gelatin salads,” said Ms. Mendelson, the author of “Stand Facing the Stove,” a comprehensive history of “Joy of Cooking.”

As “Joy of Cooking” has evolved since the first edition in 1931, written by Irma S. Rombauer, so have its recipes for gelatin molds and related aspics, whips, snows, puddings and charlottes. Some of the originals remain holiday classics, like the Golden Glow Salad of crushed pineapple, shredded carrots and lemon or orange Jell-O. (The finished product looks like a luminous, jiggly pumpkin.)

“That one turned out to be part of a lot of people’s Thanksgivings,” said John Becker, the book’s latest editor (and one of Irma’s great-grandsons). Mr. Becker, who edited the 2019 edition with his wife, Megan Scott, is a member of the fourth generation of the Rombauer family to attempt to steer the book through the wild swings of American food in the last century.

Irma Rombauer “adored anything you could do with sweet gelatin,” Ms. Mendelson said, but her daughter, Marion Rombauer Becker, “got religion about healthy eating and about fighting Big Food,” and took out many of the elaborate (layered, stuffed, multicolored) gelatin salads by 1975.

The 2019 edition has about 10 gelatin salads, mostly made with unflavored gelatin and real fruit juices, and accompanied by advice on how to make them vegan. Mr. Becker said that he and Ms. Scott wanted to move the book back toward its roots as a practical manual that both reflects and inspires the cooks of its time.

“We didn’t want to retain legacy content just for the sake of kitsch,” he said.

But kitsch is definitely part of the Jell-O-mold conversation.

Victoria Belanger, the self-proclaimed Jell-O Mold Mistress of Brooklyn and an expert in the gelatinous arts, said that among fans of her work, “there’s a kind of ironic attitude toward Jell-O molds.”

Ashley Baker is a law student in Colorado who holds an annual potluck Friendsgiving feast, for which she does all the desserts. This year, instead of pumpkin pie, she’s making pumpkin spice Jell-O shots with Kahlúa, vodka and cream. “P.S.L. Jell-O shots go really well with other desserts,” she said. (P.S.L., or pumpkin spice latte flavor, doesn’t necessarily include either pumpkin or coffee; it’s a mix of cinnamon, ginger, vanilla and nutmeg that used to be called pie spice.)

“This way I don’t have to make pumpkin pie,” Ms. Baker said. “No one ever ate it anyway.”