How Early Is Too Early to Put Up Holiday Decorations? 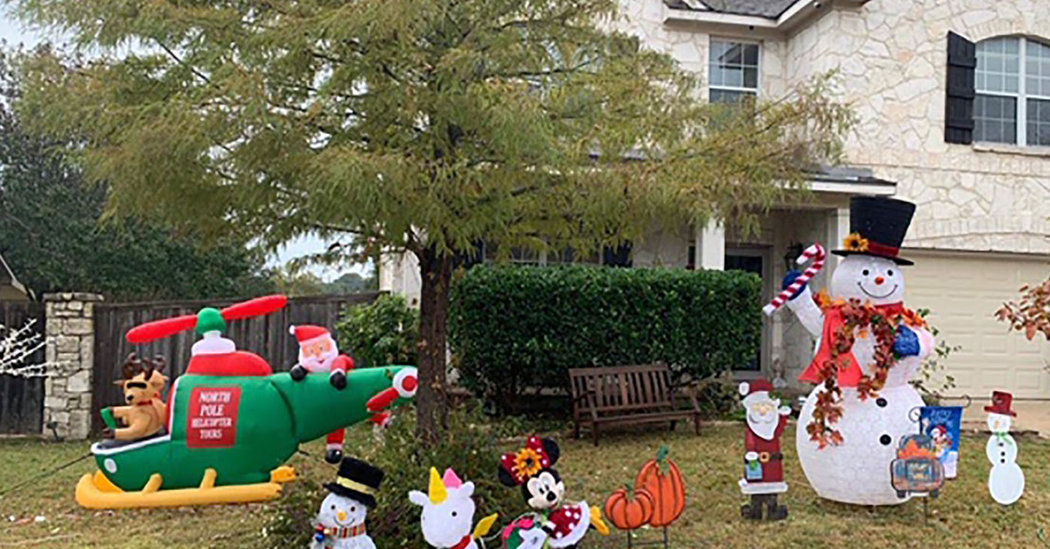 ’Twas the night after Halloween, and all round the block, a big light-up snowman had stirred neighborhood talk.

When Nick Simonis Jr. of San Antonio put the smiling snowman in his front yard on Nov. 1, the homeowners’ association for his neighborhood noticed and demanded he remove it because it was too soon for holiday cheer.

His wife, Claudia, was amused and immediately posted to their neighborhood’s Facebook page: “Who’s the Grinch that reported us?”

In addition to the snowman, Mr. Simonis, 41, and his 7-year-old son placed an inflatable helicopter — piloted by a reindeer, and with an inflatable Santa hanging off the back — a small tree and a few festive Disney characters in the yard.

Mr. Simonis said his family decided to bring out the decorations early because Ms. Simonis is eight months pregnant with the couple’s third child, and it would be one less thing to worry about if the baby came sooner than expected. Her due date is Dec. 25.

A few days later, a notice came from Diamond Association Management and Consulting, the homeowners’ association, that demanded Mr. Simonis remove the snowman until “closer to the holiday season.” The letter did not provide an exact date for when the decorations could go back up, and according to Mr. Simonis, the association’s bylaws do not specify a date for seasonal décor.

Diamond Association Management and Consulting did not immediately respond to requests for comment.

“I was upset at first,” Mr. Simonis said on Friday. “But then I texted my wife a picture of the notice, and she thought it was hilarious and posted it on Facebook to the 230-member group for our community.”

The neighbors were supportive and several even put up Christmas decorations of their own, he said.

A few days after receiving the association’s request, Ms. Simonis added Thanksgiving decorations to the yard. The snowman now wears a Thanksgiving scarf, several pumpkins litter the yard and a scarecrow sits on a reindeer’s back.

There is also an inflatable Grinch. “This is the HOA,” the sign he’s holding reads — a reference to the homeowners’ association.

Are bans on yard Santas and snowmen common?

Yes, and they are becoming more common every year.

More than 70 million people in the United States belong to a homeowners’ association, condominium community or other planned community, according to the Community Associations Institute, an international organization that provides support to such associations.

Most of these communities, which are usually governed by volunteers elected by residents, have rules dealing with holiday decorations, according to Matt Ober, the president of the institute’s College of Community Association Lawyers.

“There has to be some standard when governing how a community is going to operate,” Mr. Ober said. “But you have to fit your community.”

Mr. Ober, who has worked for community associations for 30 years, said he noticed more conflict among neighbors when there were no established rules about holiday decorations and displays of religious belief.

Around 50 years ago, there were only 10,000 community associations in the country, but now there are more than 380,000, according to Dawn Bauman, the institute’s senior vice president for government and public affairs. The country is becoming more and more diverse, and associations need to be more diligent in defining rules, she added.

Last year, 63 percent of residents in community associations said they had a positive experience, and 62 percent said the rules enhanced their property values, according to the 2018 Homeowner Satisfaction Survey.

“Conflicts still exist, but a conflict over whether you can put up your holiday decorations is practically eliminated if you have a real rule in place,” Mr. Ober said.

What is proper etiquette when it comes to sprucing up your home for the holidays?

Sharon Schweitzer, an etiquette expert with more than 20 years of experience, said there were some die-hard purists who did not believe Christmas decorations should go up before Thanksgiving. They want to celebrate one holiday at a time, she added.

Not a stickler herself, Ms. Schweitzer puts up holiday lights before Halloween every year so the trick-or-treaters can find her house at the end of a dark road. The homeowners’ association for her neighborhood in Austin, Texas, has never issued a warning to her, she said.

“I don’t have any Christmas bells out yet because that would probably cross the line,” Ms. Schweitzer said. “I wouldn’t put anything like that out until Thanksgiving.”

Nearly 40 percent of holiday shoppers said they would start buying holiday items before November, according to a survey conducted by the National Retail Federation, the world’s largest retail trade association. And just as she has observed younger adults, especially those with children, starting their Christmas shopping earlier and earlier, Ms. Schweitzer said the rules of etiquette had also become more fluid.

“I’ve even seen Christmas décor in the stores as early as September and October,” Ms. Schweitzer said. “If the kiddos see that, they’re probably going to ask Mom and Dad to put it up in the yard right away.”

That was certainly the case with the Simonis family. When the couple bought the Christmas decorations, Mr. Simonis said, their son was so excited he could not sleep.

“I know decorations usually go up in mid-November, after Thanksgiving,” Mr. Simonis said. “But we’re not a traditional family.”