Her Superhero, Even at Comic Con 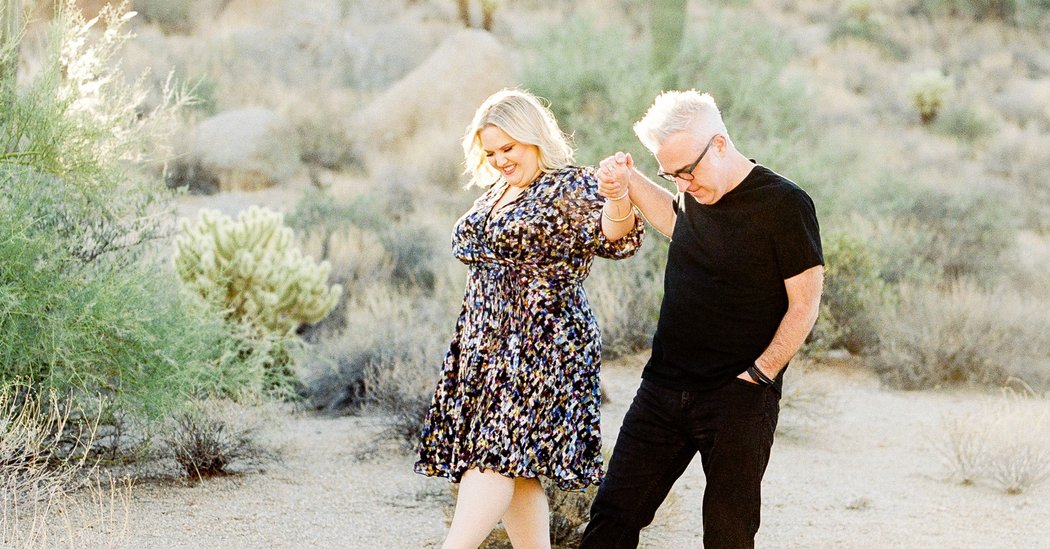 Jenny Ann Beaudry and Hans Erik Westin are to be married Nov. 17 at Royal Palms Resort and Spa in Phoenix. Jonathan Sumler, a friend of the couple who became a Universal Life minister for the occasion, is to officiate.

The bride, 35, will take her husband’s name. She is a director of communications and engagement supporting the chief risk and compliance officer at PayPal, the online payments company in New York. She graduated from Hofstra.

She is the daughter of Nancy A. Beaudry and Robert W. Beaudry of Putnam, Conn.

The groom, 53, who goes by Erik, is a senior technical project manager specializing in data engineering initiatives at Blue Apron, an ingredient-and-recipe meal kit service in New York. He graduated from Oberlin College.

He is the son of Donna Westin of Rochester, N.Y., and the late Kjell G. Westin.

The couple met in September 2009 when their desks were moved near each other at the Midtown office of Morgan Stanley. “No one was there except Jenny,” he said, since everyone had left early or worked from home during the move that Friday.

They spoke for three hours on the deserted floor, and then once Mr. Westin settled in, they spoke everyday since Ms. Beaudry’s desk was right outside his boss’s office.

“He’s so cute,” she said. “He’s also incredibly unique, and has an incredible contagious laugh. It was electric. I had butterflies.” Their age difference, she said, “has never been a thing. He’s ageless.”

She especially loved how he stood out at the office in his black jeans, black button-up shirts and white Converse sneakers, and has stark white hair that stands up straight.

“In the backdrop of corporate America, he flew off the page,” she said. “In a room of 100 people, your eyes would go to him first.”

Over the next few months, their banter about movies, pop culture and the TV crime show “Forensic Files” continued to escalate. They also began exchanging emails after work and sometimes she would even sneak a handwritten note into his blazer pocket.

“She was super-engaging, beautiful and smart,” he said. “There came a point I couldn’t stop thinking about her.”

After six months, Mr. Westin knew he had to make a move, and asked her to a movie, followed by dinner at a French bistro in the East Village. “I was taken aback by how willing I was to accept her,” and while waiting with her for a cab, he kissed her on top of her head.

They began going out to dinner more and more but continued to take things slowly.

“I was 25, and going about living my life,” she said. “He was sort of like Mr. Big in ‘Sex in the City.’ I lived on the Upper East Side, and he lived downtown in Greenwich Village.”

In June 2010, on a Saturday night when she got locked out of her apartment, she emailed him on her BlackBerry. “Come on down here,” he recalled replying on his BlackBerry, explaining she could stay on his extra AeroBed.

That evening, they spoke until 5 in the morning, and finally had their first kiss.

She started hanging out at his apartment in the Village — and in the summer of 2011, she moved downtown. “I never do think about age when I talk about movies and things,” he said. “She does not come off as young, or flippant or trivial. She is full of wisdom. She’s an old soul.”

In October 2013, she encouraged Mr. Westin, whom she described as a homebody, to go out more. That included getting him tickets, now a yearly tradition, to New York Comic Con — he loves comic books and has a storage unit to house them.

The next year, she went along to Comic Con dressed as him — wearing black jeans, a black T-shirt, a white wig and black-rimmed glasses.

“He is my superhero,” she said, adding with a laugh, “he likes to say he rescued me from the Upper East Side.”