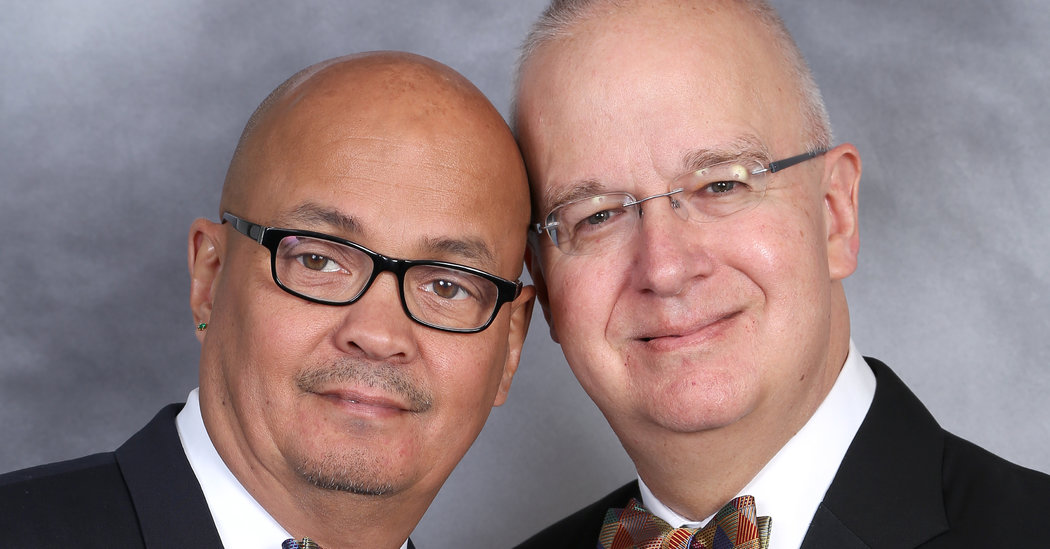 Dr. Santiago (left), 59, is a higher-education consultant, and was until 2017 the president of TCI College of Technology, which was in Manhattan. He graduated from Rutgers and received a doctoral degree in educational administration from Penn State.

He is the son of Ana Santiago of San Sebastián, P.R., and the late Jorge Santiago. Both parents retired from the Crown Clothing Company in Vineland, N.J., she as a seamstress and he as a presser.

Dr. Dovnarsky, 60, is a family physician and geriatrician, and is the associate program director for the family-medicine residency program at Jamaica Hospital Medical Center in Queens. He is also an assistant clinical professor of family and social medicine at the Albert Einstein College of Medicine in the Bronx. He graduated from Johns Hopkins University and received a medical degree from the University of Pennsylvania.

He is a son of the late Dorothy Jane Dovnarsky and the late I. Jack Dovnarsky, who lived in Harrisburg, Pa. The groom’s mother was a nurse at the Dauphin County Nursing Home in Harrisburg. His father was an accountant at the Aero Corporation, a rental-car company in Middletown, Pa.

The couple met over Memorial Day weekend in 1999 at a bar in Philadelphia, where both then lived.