George Kent and the Bow Tie of History 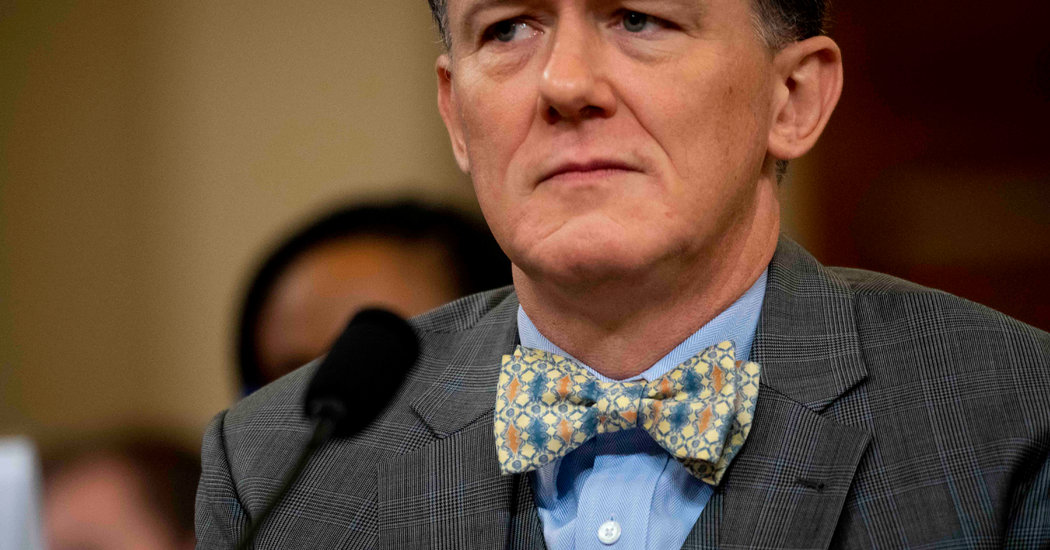 Amid all the debate and various through-the-mirror interpretations of Day 1 of the public impeachment inquiry, all the grandstanding, pundit-ing and parsing of testimony, there was one surprising point of fascination among the viewing public: the bow tie worn by George P. Kent, the State Department official in charge of Ukraine.

A lot of people noticed it. A lot of people commented on it. Hands down, the majority voted yes on it. It soon got its own Twitter hashtag: #GeorgeKentsBowTie. The Daily Beast even crowned Mr. Kent an immediate “fashion icon.”

No one was saying it was the most important detail of a historic day — of course it wasn’t. (Nor was the Nalgene bottle he brought with him, though that also got some attention.)

But it was impossible for many to ignore because, like the moment itself, it was singular; an anomaly in an anomalous time. And in that sense, it almost seemed to symbolize not just Mr. Kent himself, but also the whole experience.

The bow tie, at least onscreen, appeared to be blue and yellow (some said orange, others ocher and turquoise), in a sort of chain/paramecium pattern. It was paired with a matching pocket square and was worn with a light blue shirt and gray plaid three-piece suit, complete with neatly buttoned-up vest.

It also looked hand-tied, listing slightly as if to underscore its own authenticity — and, maybe, that of the man who wore it. It was the same bow tie that Mr. Kent wore for his portrait currently on view on the State Department website, a nod to both continuity and the fact that he was appearing in his professional capacity.

Some speculation had it that it was his good-luck bow tie. Or his power bow tie, depending. Either way, it was definitely a signature tie. Mr. Kent adopted a similar look — a paisley bow tie and matching pocket square — during his closed-door testimony on Oct. 15.

And, in its truncated shape, the opposite of the Trump tie, which is famously worn extending below the belt.

It was also a highly unusual accessory to see in Washington, where dressing like a company man is the norm, and where ties most often indicate party allegiance or flag-referential patriotism. (See the blue tie chosen by Adam Schiff, the Democratic chairman of the House Intelligence Committee, and the red one with white polka dots worn by Devin Nunes, the ranking Republican on the committee).

Washington is where the somber dark suit is the default uniform, and modernity is symbolized by rolled shirt sleeves. Where, despite famous bow-tie-wearing politicians like Franklin Roosevelt and Winston Churchill, the sight of a bow tie is rarer than the sight of no tie at all.

Instead, the bow tie has all sorts of stereotypical associations outside of the political arena. It is linked to the professor, the intellectual, the Southern dandy (at least when paired with seersucker), the nerd, the waiter, the clown.

Bill Nye the Science Guy is a famous bow tie wearer. So is Pee-wee Herman. So were George Plimpton and Fred Astaire. How those traditions color the perception of Mr. Kent depends on your cultural shorthand. In any case, he is now part of that motley assortment.

None of those things could have escaped him, since, as his testimony indicated, he is a student of history as well as a career diplomat.

The decision to go the bow tie route at a time when the eyes of the country would be on him, when the image of him in that tie was assured of becoming a part of history, was not a decision Mr. Kent could have made by accident. Which makes it hard to avoid the assumption that it was also a declaration of independence, of a sort.