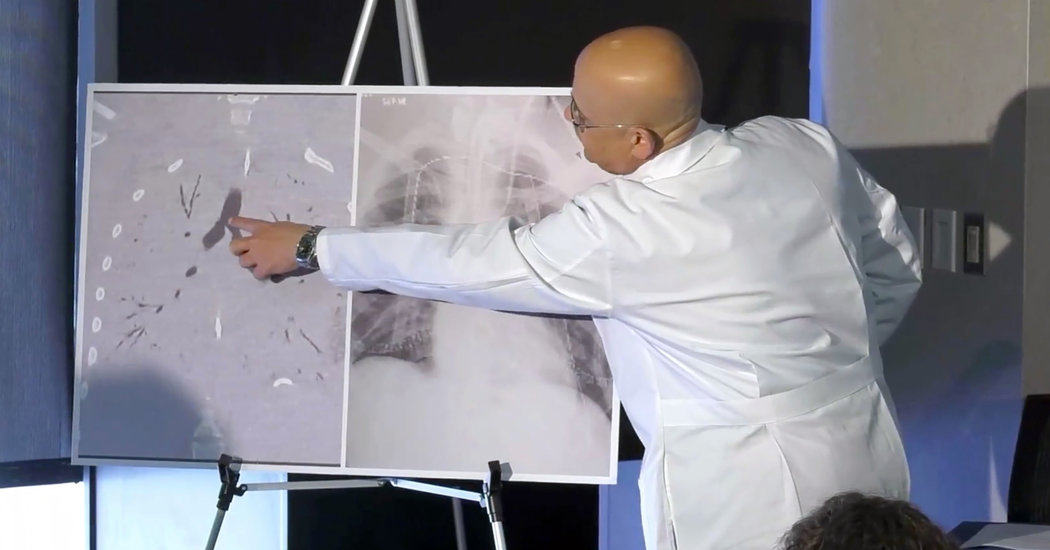 A 17-year-old boy whose lungs were irreversibly damaged by vaping received a double-lung transplant at the Henry Ford Hospital in Detroit, a lifesaving measure taken when a patient’s own lungs are diseased or damaged beyond repair and there is no other hope of survival, doctors said on Tuesday.

Without the transplant, performed last month, the patient “would have faced certain death,” Dr. Hassan Nemeh, who led the surgical team, said during a news conference at the hospital.

“What I saw in his lungs is like nothing I’ve seen before, and I’ve been doing lung transplants for 20 years,” Dr. Nemeh said. He added, “This is an evil I haven’t faced before.”

He called the case a preventable tragedy caused by “a senseless type of product that needs to be fought.”

The patient is recovering well and is up and about now, but still in the hospital. His name is being withheld to protect his privacy, but he and his family wanted to release information about his case in the hope that it might persuade others to quit vaping or never start, hospital officials said.

A doctor at the briefing read a statement from the family, which said, in part:

“We asked Henry Ford doctors to share that the horrific life-threatening effects of vaping are very real! Our family could never have imagined being at the center of the largest adolescent public health crisis to face our country in decades.

“Within a very short period of time, our lives have been forever changed. He has gone from the typical life of a perfectly healthy 16-year-old athlete — attending high school, hanging out with friends, sailing and playing video games — to waking up intubated and with two new lungs, facing a long and painful recovery process as he struggles to regain his strength and mobility, which has been severely impacted.”

Patients with organ transplants need a lifelong regimen of medicines to suppress the immune system to prevent rejection. Dr. Lisa Allenspach, a lung specialist at the Henry Ford Hospital, said that the median survival rate after a lung transplant is seven years, but that rate has been steadily improving. And second transplants are possible.

The patient’s youth and good health before this illness should work in his favor, she said, adding, “We’re hopeful that he will be alive and well for a long time.”

The doctors declined to say what products the patient had been vaping, how long he had been doing it or how often. About 86 percent of the patients with lung injuries in this outbreak had vaped THC, the chemical in marijuana that makes people high.

The case is the first transplant reported in the nationwide outbreak of vaping-related lung injuries, and it highlights the severity of an illness that, as of Nov. 5, had sickened 2,051 people and killed 40.

“I believe we are just beginning to see the tip of the iceberg,” Dr. Allenspach said.

Researchers have described the lung damage from vaping as chemical burns, similar to the injuries in people who have inhaled toxic fumes in industrial accidents, or in soldiers attacked with mustard gas in World War I.

The patient was first admitted to a different hospital on Sept. 6 with what was thought to be pneumonia. His condition worsened and he was placed on a ventilator on Sept. 12. His health continued to deteriorate. On Sept. 17, he was transferred to a second hospital, where he was connected to a machine that delivers oxygen directly to the bloodstream.

His health continued to decline, and on Oct. 3, he was transferred to Henry Ford Hospital, where he was put on the waiting list for a lung transplant. A national organization sets the criteria for eligibility, not individual hospitals. Several factors quickly pushed him to the top of the list, Dr. Nemeh said: He was a child, the lung damage was irreversible and he would die without the transplant.

The surgery was performed on Oct. 15. The doctors said they could not reveal any information about the source except to say that the donor had been healthy.

Health officials investigating the outbreak described a major advance last week: Researchers found a “very strong culprit,” a form of vitamin E, in the lungs of patients who had the vaping illness. The substance, vitamin E acetate, is sometimes used by illicit sellers to “cut” or dilute THC and increase profits.

Finding the chemical in the lungs meshed with earlier investigations that had already found it in vaping products.

The vitamin compound is thick and sticky. Precisely how it might damage the lungs is not yet known, and health authorities say it is still possible that other chemicals added to vaping fluids may also contribute to lung disease.

The doctors in Detroit did not say whether vitamin E acetate had been found in the patient’s lungs.

“We’re going to see more of this,” said Dr. Mangala Narasimhan, a lung specialist at Long Island Jewish Medical Center and Northwell Health’s regional director of critical care, who has treated several severe cases of the illness. “We definitely see some patients who have such severe lung damage, we are thinking that some of it might not be completely reversible.”

None of her patients have needed transplants.

In general, lungs for transplantation are difficult to obtain, she said. “A huge number of patients die waiting.”

About 2,500 lung transplants were performed in the United States in 2018, compared with more than 21,000 kidney transplants.

Dr. Nemeh said he expected the patient to go back to school, and added, “I hope he’ll be an advocate to stop this madness.”