Each Put Pen to Paper, and Their Story Began 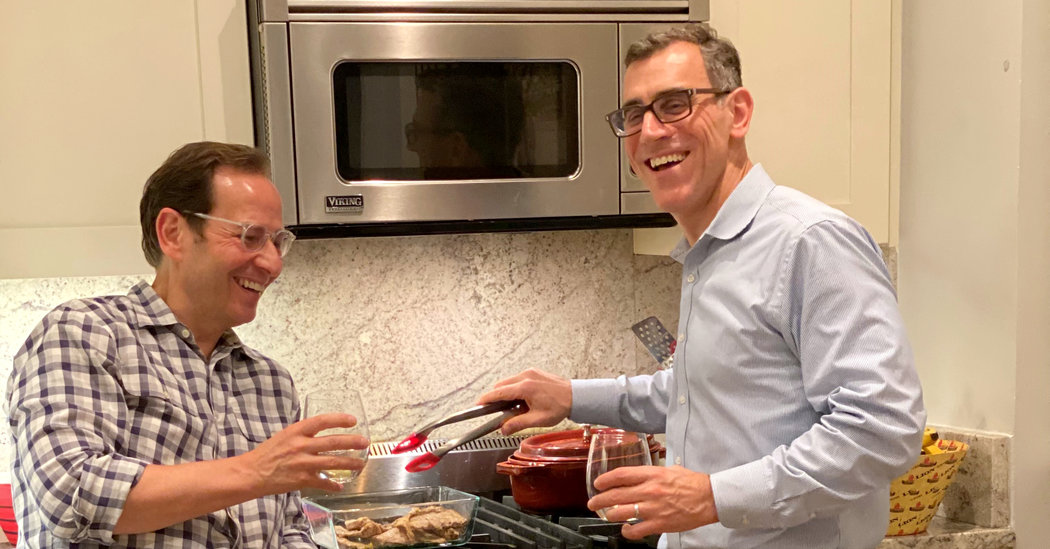 Robert Evan Bank and Alan Lawrence Cohen are to be married Nov. 24 at B’nai Jeshurun in New York. Rabbi Shuli Passow is to officiate.

Mr. Bank (left), 60, is the president and chief executive of American Jewish World Service, an organization in New York that uses philanthropy, activism and community events to help end poverty and promote human rights in developing countries. He graduated from the Juilliard School and received a law degree from the City University of New York.

He is a son of Sybil Bank and Dr. Simmy Bank of Great Neck, N.Y.

Mr. Cohen, 49, is the chief program officer at the Jewish Association Serving the Aging in New York. He graduated from Brandeis University and received a master’s of public administration from Columbia.

He is the son of Honey W. Cohen and Martin E. Cohen of Melrose Park, Pa.

Before dating apps and algorithms became the way of the dating world, Mr. Bank and Mr. Cohen were drawn together in May 2001 by a precursory concept of electronic human pairing, when mutual friends asked each to write a mini bio on actual paper.

Mr. Bank’s scrawled data was then sent to Mr. Cohen, who, in turn, received the story of Mr. Bank’s life, on loose-leaf, for the purpose of review, both hoping all the while to make a love connection generated by their Jewish faith, their common love of travel and good food, their enthusiasm for literature and the arts, and a deep commitment to social justice.

It wasn’t exactly Coffee Meets Bagel, but it got the job done.

“I received this wonderful little paragraph about this exciting-sounding man who, while 12 years younger than me had done so much with his life,” Mr. Bank recalled. “He had traveled extensively in Africa, and as I am South African, that was intriguing to me.

“He had lived in Israel, spoke Russian and Hebrew, and was a great chef,” Mr. Bank added. “He was also deeply committed to helping other people, especially older people.”

“I remember reading how Robert had dedicated his life to working to help people living with H.I.V.,” Mr. Cohen said. “I was also fascinated to learn that he was a classical musician who had played a concert at Carnegie Hall.”

They connected by phone, and on one particular call when Mr. Cohen conferenced a Manhattan restaurant to make dinner reservations, Mr. Bank said he was impressed with Mr. Cohen’s “technical prowess.”

“That also told me that he was a take-charge kind of person,” Mr. Bank said.

At the time, Mr. Bank said, he was leery about meeting anyone, let alone dating, as he had recently broken off a five-year relationship that culminated in December 2000, he said, “with a New Year’s Eve goodbye.”

But when he and Mr. Cohen hit it off, Mr. Bank said he “began to believe there were still good men out there in the world.”

“Alan was a very intelligent guy who had an empathy for people,” Mr. Bank said. “He was also very generous in letting me share in all the loving friendships and family relationships that made up his world.”

Among the prime examples of those shared relationships the past 18 years — or what Mr. Bank referred to as “a community of friends and families of choice” — are three single mothers and their children.

“The women were all friends of Alan, and we have known them since before their children were born,” Mr. Bank said. “Since their kids have come along, Alan and I have become very close to them, to the point where we feel as if they are our very own children, and those relationships have added a tremendous value to our lives.”

“It was not easy for either of us to come out as gay in the Jewish community,” Mr. Bank added. “But thanks to the people who are present in our lives, including our own parents, we were able to settle into a very comfortable, very loving and respectful relationship.”

Mr. Cohen said he was sure that in Mr. Bank, he had “not only found a good man, but the perfect man.”

“I appreciated the fact that while Robert was tender and kind, he was also a very driven, socially progressive person,” Mr. Cohen said. “His sexy, South African accent didn’t hurt, either.”