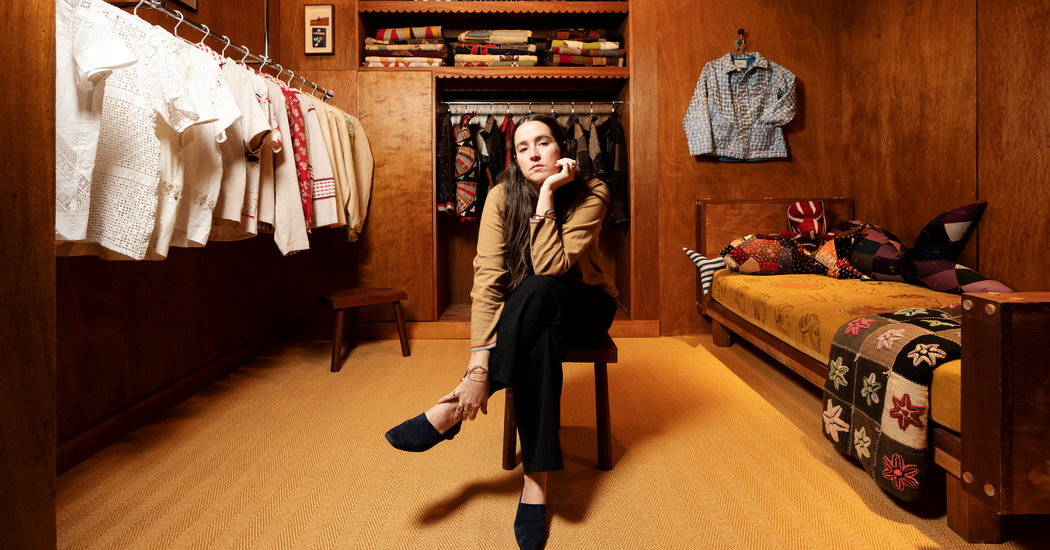 When is quirky a savvy career move?

It is when you are a young designer who once made a raincoat of quilted see-through plastic and inserted vintage copper pennies into every panel.

It is when that same designer — Emily Bode — turned a love of vintage textiles like African country cloth, ticking torn from old French bedding, tablecloths embroidered with pirates’ treasure maps and a storytelling gift worthy of the Moth into an award-winning career.

In the three years since Ms. Bode, 30, started a men’s wear label that developed cult status among admirers of her blocky work wear in patchwork patterns and Colorforms shapes, she was named a runner-up for a CFDA/Vogue Fashion Fund award, was shortlisted for the LVMH prize and saw her designs snapped up by such savvy retailers as Bergdorf Goodman, Matches in London and the e-tailer Moda Operandi Men.

It takes a certain brand of optimism — maybe the cockeyed kind — for any designer to hang up a shingle when consensus holds that bricks-and-mortar is kaput.

Nearly 6,000 stores across the United States were shuttered in 2018, a figure likely to double by the end of this year, according to data compiled by Coresight Research, a consumer analytics group. Yet far from being daunted by the parlous statistics, Ms. Bode decided the time was just right to set up shop.

Thus a brisk recent morning found the designer scrambling under the balky roll-down gate of a raw space in Chinatown with a reporter in her wake.

It is an understatement to say a particular vision was required to imagine how, in just two weeks, the bare 790-square-foot space would become a shop-cum-clubhouse with blocked-out windows, a bar and an unsettling fountain in the form of a child draped in a fishing net. Yet vision is one thing the quietly determined Ms. Bode has in plentiful supply.

The following conversation has been edited.

You have all this frontage on Hester Street, and yet the plans you describe block out a large percentage of the windows? How come?

We wanted the store to feel interior and domestic and to drive home the idea of a private selling space. We’ve been selling out of the studio for the past three years, and people like to come in and sit down and have a beer or a Coca-Cola.

That doesn’t sound like a business model that would cut it on “Shark Tank.”

Forty percent of our business is producing designs made from domestic textiles, quilts and homespun linens from the 1800s, some of them with hand-embroidery. We do a lot of custom work, and our top clients have an emotional response to the clothing. It resonates with them. So when people come into the studio, we want them to feel a genuine comfort, this feeling that is so close to home.

Can you expand on that emotional aspect of your designs, which seems to be central to its appeal?

A lot of these textiles are things that people quite literally grew up with. They say, “Oh, my grandmother had that quilt at the end of her bed.” They’re interested in learning.

We can explain that it’s a log cabin quilt and get into a whole discussion of the history of that type of quilting and be a little in tune with their own family history. And doing that we can tell our story better.

We can talk as much as we want about the Bode story on social media and on our website. We can explain our way of thinking to Matches in London, but ultimately they’re going to interpret what we’re doing in their own way.

Though that’s fine, we wanted people to have a place where they could experience the narrative firsthand.

How much of that narrative relates to your personal roots in this neighborhood?

I live a few blocks from the store. My studio is a five-minute walk away. This location is just off that stretch of Chinatown with Bacaro and Kiki’s, but it’s a little bit quieter, so it feels more private, like a destination. I like the idea that you have to explore a little to find us.

Are you countering the loss of eccentric small-scale retail to the relentless march of Chase branches and CVS?

When I was growing up and traveling a lot — my dad’s a doctor, a diabetes specialist, and we got to travel with him to conferences — my way of understanding a city was guiding myself through neighborhoods on foot. I would tear out the Lucky magazine city guides and go walking.

And people don’t do that so much anymore.

I was thinking about the way people used to explore SoHo. They walked around the neighborhood. They found stores they didn’t know they were looking for.

In New York it is. But there are places that have a real understanding of that. In Japan, they understand the investment in small boutiques.

But, again, how can that be workable as a business model in a city as costly as this one?

I worked for Isabel Marant in SoHo as a sales associate. They have a bunch of stores in Paris, and every store is different. She has an understanding of her brand, so every store corresponds to the neighborhood it’s in. Even though it’s a multimillion-dollar brand, people relate to it in individual ways.

What do you mean?

When we learned about branding in college, the rule was success has nothing to do with the way you explain the brand to consumers. It has everything to do with how people explain it so each other.

No one disputes that a Bode garment looks like nothing from another brand.

The most exciting thing is that people are beginning to recognize things as Bode. You see some comments online, or you hear people say, “Oh, that looked very Bode,’’ or “That model looked very Bode.’’ That’s been the big jump.

And now you’re planting a flag for Bode World?

The words we were using to explain ourselves internally — words like “poetic,” “domestic,” “nostalgic” — turned out to have resonance with consumers. They’re drawn into the narrative. It’s one of the reasons I continue to believe in fashion week, even though a lot of people don’t believe in spending money on shows anymore.

Bode shows always have a clubby vibe. Your last one, where your boyfriend’s design firm, Green River Project, built out a SoHo gallery to look like a garage band’s rehearsal space, felt like a big party for 500 of your closest friends.

We’ve had to rely on friends for everything we’ve ever done. Green River Project envisioned all my shows so far, and this entire store concept. It’s not like I designed it. It’s all about working with people you’re close to and being resourceful.

That brings up the question of how much something like this costs.

It was under six figures for the entire build-out. We’re totally self-funded.

That seems unusual given the amount of attention you’ve gotten even as a young brand.

It made no sense at all for us to start a business being in debt.

But isn’t it also consistent with your kind of Yankee D.I.Y. ethos?

For us, every single budget decision is major. A fixture came broken in the mail. Can we afford to replace it? The Green River Project couch we’re using usually costs $1,000 a linear foot, but we saved money by upholstering it as a collaboration.

It’s like, how much is the roll gate going to cost to fix? But, you know, we’re used to being that smaller, scrappier business. It would feel bizarre to do this any other way.