Bernard Arnault Just Bought Tiffany. Who Is He? 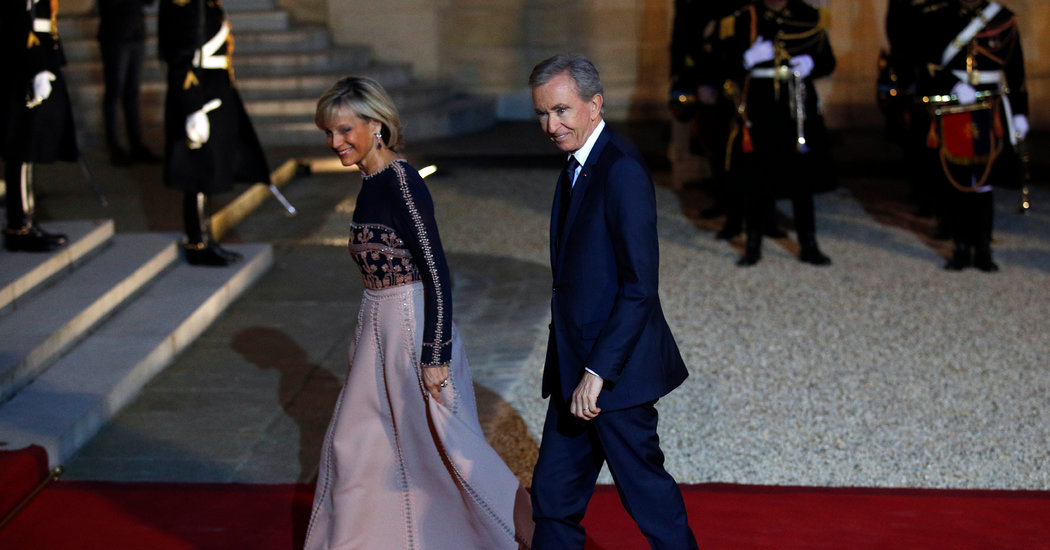 On Monday morning LVMH Moët Hennessy Louis Vuitton, the world’s largest luxury company, announced it had proposed to — and been accepted by — Tiffany & Company, the American jeweler made famous by its blue boxes, Truman Capote and Audrey Hepburn.

The man behind the largest-ever deal in luxury: Bernard Arnault, founder, chairman and largest shareholder of LVMH. If you don’t know who he is, you should.

Mr. Arnault, 70, is one of the richest men in the world — worth $106.9 billion as of Monday morning, according to Forbes. He is French, and the godfather of the modern luxury industry. He pretty much invented the whole idea (this is not overselling it).

Though his father made his money in the construction business, Mr. Arnault saw very early on the opportunities in taking a group of family-run artisanal companies, professionalizing them and leveraging their strength to the group benefit. He says he figured it out when he came to New York in the 1980s, got into a cab and discovered that his driver had never heard of de Gaulle, but he knew Dior. In that moment, the idea for an empire was born.

LVMH is three times larger in market capitalization than its closest rival, Kering (owner of Gucci, YSL and Alexander McQueen), and five times larger than Richemont (owner of Cartier, Chloé and Net-a-Porter). It is the second-most valuable company in Europe, with a market capitalization of more than 200 billion euros, after Royal Dutch Shell, the oil and gas company.

How he did it

Mr. Arnault took the principles of the masters of the universe — the corporate raiders of New York in the 1980s — and applied them to European luxury.

He started with a bankrupt French textile company called Boussac that he bought from the French government in 1985 and that happened to include a dusty old house called … Dior. He sold everything else off, but kept Dior and built from there. In 1989 he engineered a hostile takeover of LVMH that so freaked out the French business community they gave him the nickname “the wolf in the cashmere coat.”

He created the flagship store-as-brand-temple, and embraced the model of taking heritage names deeply embedded in European history and installing buzzy young designers at the top to shake up the image and give them cultural currency. But he has always placed the brand above the individual, a decision that makes him, depending on who is watching, either a genius or a bloodsucker on the body of creativity.

However, Mr. Arnault clearly loves his brands — he is given to stroking the handbags of which he is particularly fond — and will invest in loss-making names for years until he gets the creative balance right.

Only close friends know for sure! He is tall — about 6’ — thin and soft-spoken, collects contemporary art (it’s all over the LVMH headquarters on Avenue Montaigne in Paris), plays tennis seriously and is a talented pianist.

He is also very competitive. He has said he wanted the No. 1 company, because he realized he couldn’t be the No. 1 tennis player or concert pianist. However, when he was wooing his second wife, the Canadian pianist Hélène Mercier, he did it by playing for her. She said she realized he was serious about her when she could see how nervous he was.

In the company, he is mostly referred to as “B.A.” When his colleagues are asked to describe him, they generally give a Gallic shrug and say, “He’s from the North,” as though that explains everything. You know: It’s colder and grayer up there in Normandy.

He has two children from his first marriage, Antoine and Delphine, and three from his second: Alexandre, Frédéric and Jean. Four of them work at LVMH. Antoine is chief executive of Berluti, chairman of Loro Piana and head of communications and image for the whole group; Delphine is executive vice president of Louis Vuitton, member of the executive board of LVMH and spearheaded the LVMH prize for young designers, the most lucrative emerging designer prize in fashion. Alexandre is chief executive of Rimowa, the luggage brand, and Frédéric is strategy and digital director of Tag Heuer. One of the most popular games among LVMH Kremlinologists is “who’s the successor?” So far, it’s still anyone’s guess.

With whom does he hang out?

The power crowd. He is such good friends with Nicolas Sarkozy, the former president of France, that he was a witness at Mr. Sarkozy’s 2008 wedding to Carla Bruni, and is also close to the current French president, Emmanuel Macron, and to Tony Blair, the former British prime minister. He also knew President Trump during their time in New York in the 1980s, and was among the first international business leaders to visit the new president at Trump Tower in early 2017. Last month, Mr. Trump cut the ribbon on a new Louis Vuitton factory in Texas. Mr. Arnault also was close to Karl Lagerfeld, the Chanel and Fendi designer who died in February.

Does he ever lose?

Rarely (when he plays tennis with Roger Federer, perhaps) — and when he does he usually still makes money out of the deal. He fought a handbags-at-dawn battle with Kering (then PPR) for Gucci in 1999, which he eventually lost, and in 2010 began buying Hermès stock, much to the Dumas family’s dismay. The following year the Hermès chief executive, Patrick Thomas, effectively compared the unwelcome approach to a “rape” (they eventually made peace and Mr. Arnault backed off, after reaping a tidy profit from his investment).

He also suffered a quasi-black eye when the French media discovered in 2012 that he had applied for a Belgian passport during the socialist administration of President François Hollande, though he said it was only for estate planning purposes.

Is he done buying?

Don’t be silly. This year alone he made a deal with Rihanna to open a new luxury house with her, and next year LVMH is reopening La Samaritaine department store/hotel/spa on the Right Bank in Paris — after a 15-year, $1 billion renovation. This year he also signed a joint venture with Stella McCartney, so she’s part of the fold, too, and has become a special adviser to the chairman for sustainability. Once upon a time he considered buying Armani, and rumor has long had it that he would dearly love to add Chanel to the group.

Outreach! Recently (and somewhat under the influence of his children), the wolf is starting to change his pelt. In 2014 he built the Fondation Louis Vuitton in the Bois de Boulogne, an extraordinary Frank Gehry-designed museum for contemporary art (and his own corporate contemporary art collection) that will ultimately become a gift to the city of Paris. In addition, he has pledged €200 million to the restoration of Notre-Dame after the fire earlier this year, and LVMH has donated $11 million to fight the wildfires in the Amazon rainforest. He has also been much more vocal about sustainability.

Well, I wouldn’t go that far.