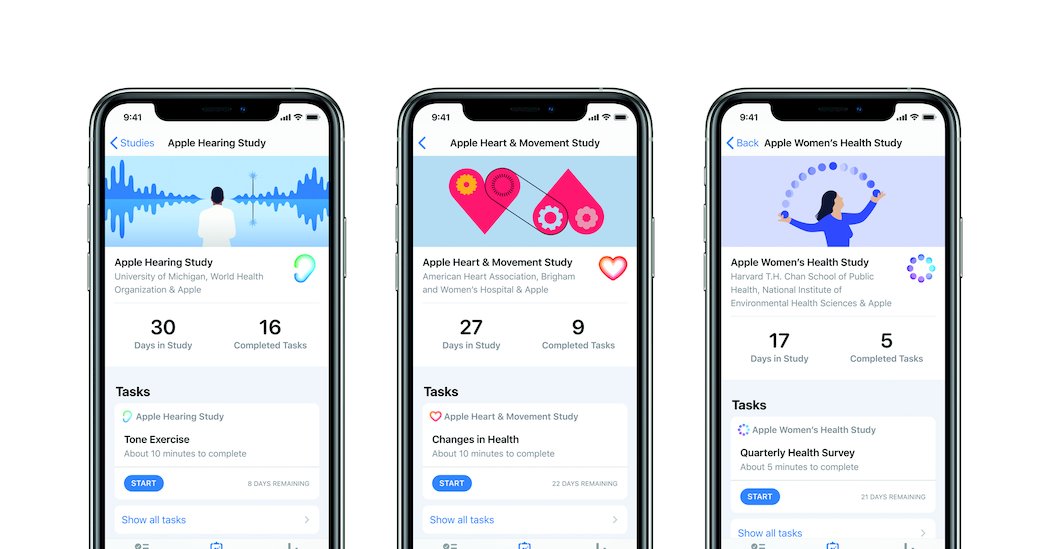 In 1976, the Harvard School of Public Health and two other major medical institutions started a study on nurses that has become one of the largest and longest research efforts ever conducted on women’s health. They have so far enrolled more than 275,000 participants.

On Thursday, the Harvard school announced an even more ambitious women’s health study, one that aims to enroll a million women over a decade.

Harvard’s new study is just one of three new large research efforts that Apple is working on with leading academic research centers and health organizations. Together, the studies, which Apple is paying for, show how the Silicon Valley giant and its popular products are reshaping medical research.

To enroll in clinical trials, patients have often had to travel to medical centers to get briefed by researchers and fill out the study paperwork in person. Many studies also follow patients only intermittently, in periodic surveys and visits to hospitals.

But Apple tools are enabling large-scale virtual studies that can follow people as they go about their daily lives. The company has developed a research app for iPhones — which participants can download from its app store — that is helping researchers quickly and easily recruit hundreds of thousands of study volunteers.

Researchers at Stanford Medicine, who studied whether an app on the Apple Watch could detect an irregular heartbeat condition, were able to enroll more than 400,000 participants in just eight months. Apple helped recruit volunteers by promoting the study, which was published on Wednesday, in its app store and emailing customers who had bought Apple Watches.

Dr. Ethan Weiss, an associate professor of medicine at the University of California, San Francisco, said he thought there would be many more of these so-called virtual studies, partly because they reduce the burden and costs compared with in-person studies.

He noted, however, that doctors did not yet know whether monitoring people en masse through smartphones and consumer-wearable devices would significantly improve health outcomes. “This is the big question. Is this ‘so what’? Or are we going to learn something meaningful we don’t know yet?”

Michelle A. Williams, the dean of Harvard’s T.H. Chan School of Public Health, said she hoped the new study of women, called the Apple Women’s Health Study, would enable researchers to learn much more about how women’s bodies and reproductive health change over time. Through surveys, she said, women participating in the study may choose to provide qualitative information about their menstrual cycles, pregnancies, menopause and other health issues. Through the study’s app, they may also choose to automatically share fitness, heart rate and other quantitative data gathered by their iPhones or Apple Watches.

“I’m most excited about the fact that we’ll be able to collect women’s menstrual cycle information in ways that we’ve not really done before,” Professor Williams said. “Having this data on a large modern cohort is so relevant to clinical women’s health today because a lot of the decision making and diagnostic protocols that we’re currently using are from data from 50 years ago when the social environment was different.”

Apple’s involvement in the research studies is the latest example of how the biggest tech companies are edging their way into the country’s $3.5 trillion health care market. The companies are making inroads in medicine in part by exploiting their scale, along with the technologies that have helped them dominate markets like cloud computing, search, productivity tools and consumer apps.

Microsoft recently began testing an artificial intelligence system for hospitals that records, transcribes and analyzes doctor-patient conversations. Google is working with hospitals to analyze millions of patients’ medical records in the hopes of identifying patterns to improve diagnosis and treatment.

Apple is striking out in a different direction. The company has acquired health and wellness start-ups and hired prominent medical researchers. It has made health a marketing point of its devices. Last year, it introduced an electrocardiogram app on the Apple Watch Series 4. This year it introduced menstrual cycle tracking and hearing health services for the iPhone and the watch.

In addition to the women’s health study, Apple is sponsoring a study, led by researchers at Brigham and Women’s Hospital in Boston, that will examine physical activity and heart data from the Apple Watch to try to identify early warning signs of declining heart health. Another study, by researchers at the University of Michigan, will collect noise level data from headphones and an iPhone app to examine how long-term sound exposure can affect hearing.

The names of the studies also provide a marketing opportunity: They’re called the Apple Hearing Study, the Apple Women’s Health Study and the Apple Heart and Movement Study.

Jeff Williams, the chief operating officer of Apple, said the company hoped the studies would bolster the understanding of women’s, heart and hearing health. Apple also hopes to use the study data to improve its products or create new ones.

“We have a noise meter on people’s Apple Watches,” Mr. Williams said. “If we can help them understand the sound exposure in their environment and help them avoid the problem, or at least mitigate the problem, with hearing loss, that’s a huge contribution to society.”

The Apple studies could also influence how research studies treat health privacy. Apple’s research app allows study participants to granularly choose which types of information — such as heart or physical activity data — they share with researchers. Participants also have the ability to stop sharing their data or change their data-sharing category selections at any time. They can also choose to delete the current day’s data before it is shared with the study.

But the studies reliant on Apple devices have inherent limitations, because owners of the company’s products are not representative of the general American population. People who use iPhones have a median income of about $89,000 compared with $64,510 for Android users, according to recent data from Comscore. Among the Apple Watch users in the Apple Heart Study, there was a lower percentage of women, African-Americans, Latinos and people aged 65 or older as compared with census data on the general population.

Professor Williams of Harvard said that the women’s health study would ask participants for demographic information and adapt its methodology to account for any underrepresented groups.

There are also some concerns that Apple, which has already reshaped how people live, communicate and entertain themselves, is pursuing yet another way to influence society, this time through health.

“The broader point here is the fact that Apple has control over the app store, that Apple has connections with all of the people that have Apple iPhones, and that Apple gets to make a lot of decisions about how you collect the data, about how to notify people to be a part of the study,” said Matt Stoller, the author of a new book, “Goliath: The 100-Year War Between Monopoly Power and Democracy.”

Whatever the potential health benefits, he said, “it’s still an extraordinary concentration of power in Apple’s hands.”