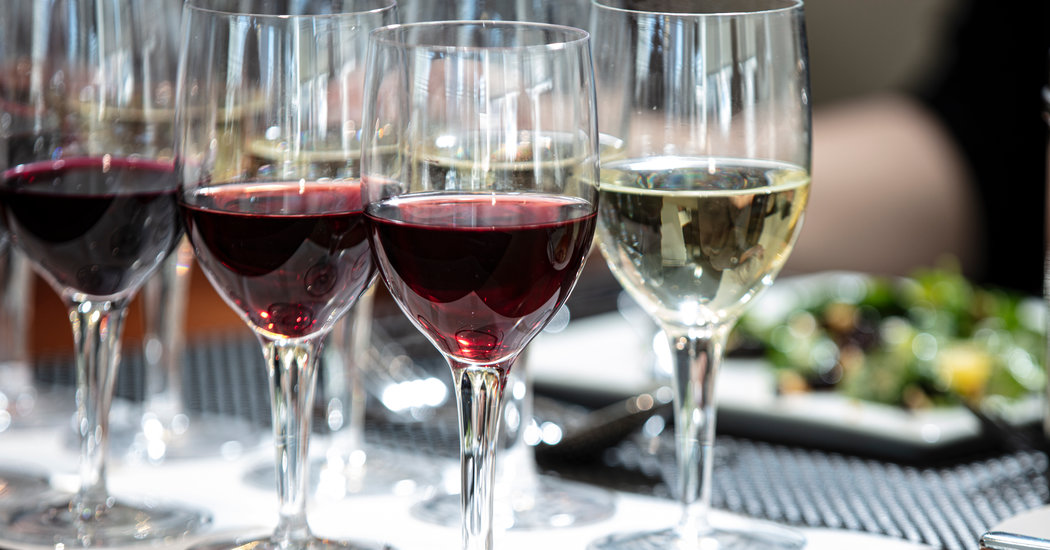 For more than 15 years, the wine panel has been celebrating Thanksgiving early. We gather over a representative holiday meal to examine how a variety of wines will fare at the feast.

Over time we have learned a few things that ought to come as a relief to all who sweat the task of picking wines for the holiday.

Here’s the most important thing: To muck this up, you will have to try really hard. Even if you do, everything will still turn out fine. In general, people come to Thanksgiving for the joy of joining their family and friends and re-enacting the annual rituals. Good food and wine is extra pleasure.

Even if the food and drink are not so great, it will not matter. Only one sin can mar this holiday: Running out of either.

Despite the usual cantankerous grousing — just part of the holiday fun — Thanksgiving’s greatest purpose is recognizing shared traditions and ancestors. Few things bond people so well as eating and drinking themselves into a stupor.

The hard part is the organization and the timing: making sure that all the ingredients are on hand, the chores assigned and the goods purchased. Picking wine is a snap.

A few guests will care more about the wine than the others, who will happily drink whatever is served. With good planning, those to whom wine matters most will draw the assignment of selecting it.

While wine will never make or break the holiday, the wine panel has over time developed useful guidelines that have proven themselves again and again. They nonetheless bear repeating because, let’s face it, last year was a long time ago. Even though you’ve been through this drill, reminders are always helpful. These are the key points:

Figure on having one bottle per drinking guest. This may sound like a lot, but trust me, you want more than you think you will need. Chances are you will not drink it all up. Extra bottles make nice parting gifts.

Plan on having a white and red. It’s easiest to select one of each and buy multiple bottles, but it’s also fun to have an array of choices, which might result in many bottles being opened at once. Decide according to your tolerance for disorder.

Keep it simple. You can supplement with sparklers or other alternatives, but it’s hospitable to play it down the middle with whites, reds and maybe a rosé. Unless you have a crowd of intrepid wine fans, this isn’t the time to subject your guests to challenging styles. Open one such bottle for the curious, if you like, but remember, the wine serves the festivities. It’s not the center of attention.

Keep it light. Thanksgiving is an endurance contest: You want wines that are energetic rather than soporific. That means relatively low in alcohol, with plenty of fresh, lively acidity. Bubbles or sweet wines, even well-balanced ones, can be tiring over the long haul. Those wines can be additions, but should not be the core choices.

Think twice about wine pairings. If your feast is a dinner party for eight, go ahead and match wines with courses and particular dishes. If it’s something larger, don’t be fussy. Pick flexible bottles that are generally great with food. Wines with pronounced tannins, sweetness or oak flavors will be less nimble than dry wines high in acidity. Wines with vibrant acidity generally include sauvignon blancs, chenin blancs, certain chardonnays, rieslings and many Italian whites. Reds include Beaujolais, barbera, many pinot noirs and wines from cool-climate regions. Your choice can also be a function of a producer’s style rather than the grape.

Save your expensive wines for small gatherings. For large parties, figure on spending $10 to $25 per bottle. Be guided by your budget, but know that the odds of finding interesting wines improve exponentially at $15 to $25. One more thing: Newly purchased expensive wines often benefit from additional aging. Moderately priced wines are more likely to be immediately enjoyable.

Many wines will do wonderfully. Over the years, the Thanksgiving wine panel has successfully internalized the wisdom of feasts past, with occasional exceptions. For our holiday run-through I was joined by my colleagues Julia Moskin, Florence Fabricant and Pete Wells, along with our tasting coordinator, Bernard Kirsch.

Each of us brought two bottles, a red and a white or rosé, with each costing no more than $25.

As popular as rosé has become, consumers continue to toss it aside like worn espadrilles after Labor Day. Yet good rosés can be wonderful year round. Many fit into the “versatile” category, and therefore would be great choices for Thanksgiving.

Pete alone brought a rosé, a 2018 Terrassen from the Finger Lakes, made from the blaufränkisch grape.

It turned out to be a great choice. It was rich yet fresh and lively, with tangy flavors of chalky red fruit. Blaufränkisch, especially when it comes from the Burgenland region of Austria, often shows peppery, savory fruit flavors. I’ve had a few good ones from the Finger Lakes as well.

“I was looking for a rosé that was not at all like a Provençal rosé,” Pete said. But even a good Provençal rosé, which might be a little less earthy than the Terrassen, would be a good choice. Be careful of mass-market rosés, though, which often have fleeting life spans rivaling the longevity of tsetse flies.

Pete’s choice of a red was not nearly as well-received. It was a big California zinfandel from Contra Costa Country, a 2017 Three “Red Label.” Pete found it refreshing and lively, but the rest of us thought it tasted sweet and hot at 15.2 percent alcohol. This wine decidedly did not fit our hard-earned guidelines, but Pete stood by his choice.

“I’m going to keep bringing zinfandels until I find one you like,” he told us, as if it were the tray of brussels sprouts nobody had touched.

Bernie brought our second choice among the whites and rosés, a 2017 Tendoni di Trebbiano from Centopassi in Sicily. Centopassi is fascinating: The wines come from various vineyards near the town of Corleone that have been confiscated from convicted Mafiosi. This one, made from the trebbiano grape, was rich and refreshing, with an almost oily texture that stood up to any sort of food. Yet the wine was still relatively light on its feet, even if, at 14 percent, it was a little higher in alcohol than I would prefer.

Many other Italian whites would be good choices, whether verdicchio, fiano, Etna Bianco or Soave. I brought an Italian white, too, a 2018 Trebbiano d’Abruzzo from Tiberio, which I wrote about a few months ago and have been enjoying since.

Though they have the same name, Trebbiano d’Abruzzo is a different grape than the Sicilian trebbiano. I think it has more character, especially from a good producer like Tiberio. This wine was somewhat neutral in flavor, but it was so lively, its texture so inviting, that it felt great to drink.

Sauvignon blanc is a reliable, crowd-pleasing white that is now made all over the world. It may not hit the high notes, but it will do the job at Thanksgiving, and both Florence and Julia brought examples. Florence’s, a 2018 Indaba from the Western Cape in South Africa, was a straightforward, uncomplicated expression, light and refreshing but simple.

Florence said she was looking to go cheap this year and was attracted by the price, just $10. Her red, a 2016 California pinot noir from Montpellier Vineyards, was even cheaper at $8.

This is not the kind of wine I enjoy. It’s made by Bronco Wine Company, which also produces Two Buck Chuck, and it did not taste much like pinot noir. In fact, it was just 75 percent pinot noir, with an array of other grapes thrown in, very much against the tradition of not blending pinot noir. That aside, the wine was light-bodied and relatively inoffensive, unless its lack of varietal character would bother you.

Julia’s sauvignon blanc came from the Touraine-Chenonceaux region of the Loire Valley. This was richer and more textured than the Indaba, and I felt it had more depth, but my colleagues preferred the straightforward Indaba.

Her red was a 2017 Montepulciano d’Abruzzo from Agriverde, a bright, fruity wine with greater character than the pinot noir or zinfandel, but perhaps a little more tannic than would be best for a long meal. It had a pleasant cedary quality as well that reminded Pete of Bordeaux.

My red turned out to be our favorite, a 2018 blend of syrah and gamay from La Ferme des Sept Lunes in the Northern Rhône Valley. I had never tried this wine before, but I love the producer’s St.-Josephs, and imagined I would love this wine too.

I don’t see many syrah-gamay blends, but this, from the Ardèche, reminded me of a Bourgogne Passetoutgrain, a juicy, refreshing combination of gamay and pinot noir. This hit all the right notes, combining the joy of gamay with the savory earthiness of syrah. By the way, Passetoutgrain is a great Thanksgiving choice, as are Beaujolais, the home of gamay, and any easygoing Rhône syrah.

Our second-favorite red, a 2017 cabernet franc from Keuka Lake Vineyards in the Finger Lakes brought by Bernie, was likewise superb, intense yet light-bodied, with plenty of intriguing aromas and flavors. Many other Finger Lakes cabernet francs would also make great choices as well.

One last important point: Please do not restrict your choices to this year’s favorites. The sorts of wines they represent is more meaningful than the specific brands. Ask your merchant for similar bottles, and by all means consult past Thanksgiving columns for additional specific ideas.

And whatever you select, just don’t run out.

Energetic and textured; the flavors are somewhat neutral, with a citrus edge, but it feels great to drink. (The Sorting Table, Napa, Calif.)

Sauvignon blanc lovers, this is for you, direct and to the point. (Cape Classics, New York)

Intense but light-bodied, with refreshing aromas and flavors of flowers, red fruits and stones.

It doesn’t taste like pinot noir, but it is lightly fruity and lightly tannic.

Polarizing. Lively and peppery? Or hot, sweet and confected?

Jen Pelka planned to serve figs in blankets at the New York branch of the Riddler, the Champagne bar she owns in San Francisco. How clever, I thought, tailor-made for vegetarians and less rich than the classic little hot-dog version. The snack left the menu when the fresh fig season ended. “Why not dried figs?” I thought. Plumped in port and stuffed with Stilton, they suit the holiday season alongside white, red, rosé or sparkling wine, with cocktails or punch. And it’s an appetizer that can be made in advance and frozen. Serve it with a salad or as part of a cheese course. The puff pastry, a recipe from the Manhattan spice shop La Boîte, is quick to prepare in a food processor using frozen butter. The figs in blankets can also be made with store-bought puff pastry; one pound is what you’ll need. FLORENCE FABRICANT