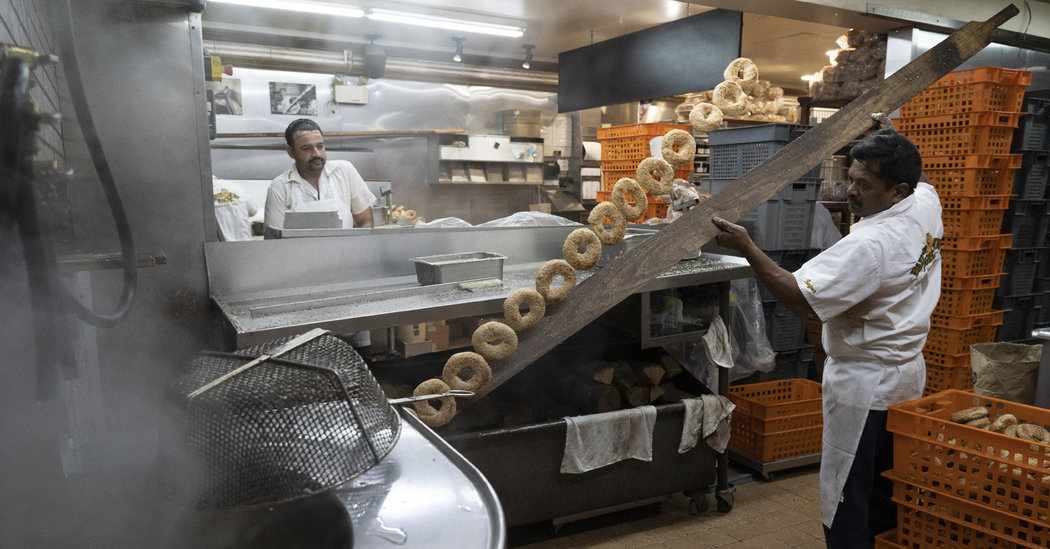 MONTREAL — Irwin Shlafman, the owner of Fairmount Bagel, boasts that his bagels were the first in outer space, when his astronaut cousin brought them to the International Space Station.

He also says Fairmount, founded in 1919, is the oldest bagel joint in town.

Just don’t tell that to his arch-bagel-rival, Joe Morena, the jovial owner of nearby St-Viateur Bagel. He contends that his bagel place, opened in 1957, is Montreal’s longest continuously running bagel outfit, since Fairmount was closed for a time.

“His bagels went to the moon, yeah, sure,” Mr. Morena said. “But the oldest? Give me one iota of proof!”

The two men are competitors in the business of Montreal bagels, which have a distinctive flavor from being boiled in honey-infused water before being baked in a wood-burning oven.

These days, however, Mr. Shlafman and Mr. Morena are united against a common threat — environmentalists who want to abolish the pollutant-producing ovens where the bagels are made.

The battle heated up late last year when rumors began to circulate that a City Hall official was planning to ban the ovens, which emit fine particles that can aggravate respiratory ailments like asthma. Angry neighbors had complained to the city and some were boycotting the vaunted bagel shops.

Coming to the defense of the bagels were fans who treasure the carb-heavy snack as an essential part of the city’s Jewish history and social fabric.

Montreal bagels have become a global culinary emblem of the city, alongside smoked meat and poutine, and are doughy unifiers in a majority French-speaking province buffeted by identity politics.

The Montreal bagel has such a hold on the Canadian psyche that fears of its demise spurred a national outcry. “The Death of the Montreal Bagel?” asked a story last year in The Globe and Mail, a leading national newspaper.

Joseph Rosen, a humanities professor from the area, said the issue was so polarizing that neighbors on either end of the bagel rift were no longer speaking.

“People were shockingly divided,” Mr. Rosen said. “The bagel is one of the few things that bring Montrealers together, like Leonard Cohen or the Montreal Canadiens hockey team.”

Sarah Hanneman, who lives next to Fairmount, said the smoke from its oven was so bad she couldn’t bear opening her window in the summer and had trouble breathing. She stressed she has nothing against bagels.

“They should get rid of the wood-burning ovens and market their bagels as green bagels,” she said. “But every time the city suggests banning the ovens, people cry, ‘You can’t take away my bagels!’”

Mr. Morena, at St-Viateur, dismissed what he called anti-bagel “radicals.” “Why are they picking on small mom-and-pop bagel shops?” he asked, standing under St-Viateur’s wall of fame showing local celebrity patrons like Celine Dion.

“I want to be able to say that my bagels are hand rolled and cooked in a wood burning oven,” he said. “That’s what makes a Montreal bagel.”

He also says St-Viateur “bagels are like snowflakes,” each with a different shape, while Mr. Shlafman lauds his Fairmount bagels for their symmetry.

Jenna LeBlanc, an environmental scientist who is a bagel supporter, put it this way: “Some things just bring you comfort and joy,” she said on a recent pilgrimage to Fairmount with her mother.

For the moment, the bagel war is at an impasse. City Hall is considering a regulation that would require businesses with wood-burning ovens to install purifiers. Fairmount Bagel said it had already done so, while St-Viateur has installed a filter in one of its seven locations.

But the authorities in the area have banned new businesses from installing such ovens, causing alarm that the art of Montreal bagel-making could disappear.

Both outfits have their flagships in Mile End, a multicultural, hipster enclave where Hasidim wearing large black hats walk hurriedly down the same streets where young women with nose rings carry yoga mats. For Mr. Shlafman, whose grandfather Isadore founded Fairmount after he came to Montreal from Kyiv, Ukraine, keeping Montreal bagels alive is a family imperative.

“My father, Jack, used to talk about bagels as if they were people,” Mr. Shlafman, 63, said on a recent day as he rolled bagels at breakneck speed in Fairmount’s cramped kitchen in Mile End, the only outpost of the store. “Everyone knows the Shlafmans are the original bagelmen.”

And lest anyone think his bagels-in-space story is just family lore, it’s not: Gregory Chamitoff, his relative and a Canadian astronaut, carried 18 bagels aloft in 2008.

Such is the pull of the Montreal bagel that a Japanese tourist once arrived in a limousine in front of Fairmount Bagel, holding a map with a line of dots leading from Osaka to the bagel shop. And St-Viateur once received an order for 20 dozen bagels for Prince Charles. Mr. Morena thought it was a joke until a British naval officer arrived to pick them up.

Messing with the Montreal bagel would come at too high a price, said Bill Brownstein, a veteran columnist for The Montreal Gazette, whose book about Schwartz’s, a venerable Montreal deli, was turned into a musical.

He noted that, in a province that recently passed a law banning teachers, judges and police from wearing religious symbols like turbans or skullcaps while at work, the bagel had become a secular symbol of civic pride. That, he added, was helped by its manifest superiority to New York bagels.

“New York bagels are like rolls with holes, they are tasteless,” he said. “Toronto’s are even worse, they taste like paperweights or hockey pucks. In the minds of Montrealers, every other bagel is ‘Meh.’”

Mr. Morena began rolling bagels at 15, after his family emigrated from Salerno, Italy. He was given the Yiddish name “Yossel” by St-Viateur’s Jewish founder, Myer Lewkowicz, a Holocaust survivor.

Eventually, Mr. Morena took over the business. The bagel was a powerful example of immigrant success. “Look at me — I’m an Italian guy running a Jewish business,” he said.

While the origin of the bagel is the subject of Talmudic-style debate, Mr. Shlafman of Fairmount traced it to a 17th-century Jewish baker who made bagels as a homage to a Polish king. But other experts say the bagel is a relative of the pretzel.

Fairmount has had a few milestones. In 1952, Mr. Shlafman recalled, an elderly Jewish man came in with a bag of sesame seeds, complaining that poppy seeds got stuck in his dentures. Soon, the news spread among the close-knit Jewish community, and the sesame seed bagel became a Montreal fixture.

Today, Fairmount, like bagel stores elsewhere, sells varieties like blueberry and muesli bagels. On a recent day, long lines snaked outside both shops, which are open 24/7. Fairmount Bagel’s front door doesn’t have a lock.

“Who makes the better bagel,” said Montreal’s mayor, Valérie Plante, “is a question which Montrealers will forever debate.”